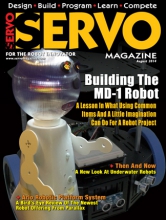 In Part 5, we’ll wrap up our series by performing a few tests and then tuning the machine, so you will be able to put your new CNC to use.


Teaching a Robot to Play Catch With Minimal Mathematics

Discover an alternate method for teaching a robot to predict the flight path of a ball.

The ability to determine the frequency of a waveform is key to modern robotics — think quadrature detectors, ultrasound, IR, and laser range finders. Learn how to use the compare mode to generate accurate timing pulses or repeat waveforms of a specific frequency.


A Look at the Arlo Robotic Platform System

As an Engineering Tech at Parallax, Chris is able to give us a bird’s eye review of the company’s newest robot offering.


Cal Alveras — the Making of a New Friend

As projects often go, one simple idea can lead down unexpected paths. See how the Microsoft Kinect sensor, a book, and a stuffed animal led to the creation of this boney beast.

Get some inspiration from this robot build that was created by using a lot of common items in a unique way.

Ask Mr. Roboto
by Dennis Clark
Your Problems Solved Here (08.2014)
Working with noisy pneumatics, the best material to use for a target, dealing with stainless steel legs that snap, and why not to bargain-hunt for ABS plastic.

Then and Now
by Tom Carroll
A New Look at Underwater Robots
The sea is a harsh mistress, and there are a lot of factors that have to be considered when designing robots for work under the waves.

by Dylan McCarthy
in The Combat Zone

Back in March of this year, 22 robots gathered at Harrisburg University in Harrisburg, PA to participate in Pennbots' annual Downtown Dogfight competition.

Afew months ago, I was making a batch of drums for my Saifu Ant kits when I received an order for a wider drum for a customer who was building his own chassis.