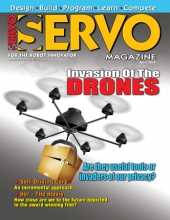 Invasion Of The Drones

No PC and You Need to Code Your LEGO EV3? No Problem!

Baked inside each LEGO MINDSTORMS EV3 Brick is the ability to code primitive programs. See how to use it to perform rapid prototyping “sanity checks.”

3D printers are great for prototyping, but nothing beats the consistency for milling multiple parts like a CNC router or milling machine. Here’s how to have one on the cheap.

Give your robot a happy face — or whatever look you’d like — with LED arrays.

The movie 'her' (and yes, they purposefully use a lower case h) brilliantly tells the not-too-futuristic story of a biological male who falls headphones over buffering wheels in love with an artificial intelligent (AI) operating system.

How to Mount Motors and Wheels to Your Robot

So, you’ve got a nice robot base. You’ve dug up some motors and wheels that you think will be perfect. Now what? Just exactly how do you attach the darn things?

Details of the build process are explained for the robot and the controller, plus take a closer look at the software for this telepresence platform.

Similar to last month’s SpiderBot hack, see how to take a $10 kit and turn it into programmable bot with a mesmerizing walking action.

Twin Tweaks
by Bryce Woolley, Evan Woolley
Weapons of Bot Destruction
Our favorite hackers continue the revival of their combat bot by reinventing the spinning weapon.

Then and Now
by Tom Carroll
Drones
Bad press, misunderstood information, and abuses of power continue to bring controversy to this otherwise useful technology.

Spanky is the newest robotic member of Near Chaos Robotics. Spanky was designed with two events in mind: DragonCon Robot Battles — an open platform Sumo style event; and the Sportsman class at Motorama — an event with a full arena.

This month, we address the other variable: torque. In terms of robot combat, torque is our fancy word for pushing power.

Here are some tips to avoid some common pitfalls at your first competition.