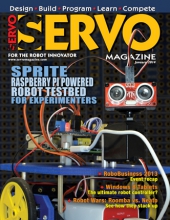 RoboBusiness 2013: A View from the Expo

A quick recap of the recent event.

Learn how to integrate the tablet’s sensors by first using it as a steering wheel, then taking advantage of the tablet’s compass to maintain a robot’s heading.

PBOD gets some major design changes.

Build this multi-purpose robot base geared toward the hobbyist (or student) to experiment with to your heart’s content.

Robytes
by Jeff Eckert
Stimulating Robot Tidbits (1.2014)
• Flying Bugbot Out of the Woods • In Your Face — and Beyond! • Forget Mint: Here Comes Mab • Budgee in Your Budget? • Bookbots in the Sky

GeerHead
by David Geer
One Man and an Idea
See what DJ Sures is doing at EZ-Robot Revolution for the future of robotics.

Then and Now
by Tom Carroll
Robot Wars: Roomba vs. Neato
See how these robot vacuums stack up against each other.

Aweight class in combat robotics can be dominated — often for years — by one particular bot.

FingerTech Robotics has recently developed and produced a new channel mixer for use on robots in all weight classes.


EVENT REPORT: The Adventures of Scary and Angry Bot

Last month, I did a brief report about how my two sons and I built their first "real" combat robots — "Angry Bot" and "Scary." This month, I want to discuss how they did in their matches. You may be a bit surprised by the result.


THEN AND NOW: A Decade Later with Alexander Rose

This is the next installment in our series of articles about famous figures from a decade ago. 2002 ended the popular Comedy Central series, BattleBots™.