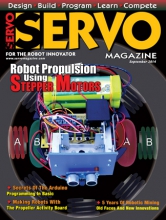 This year’s event saw some familiar faces, but lots of new innovations.

Do you remember our old friend from the DARPA Robotics Challenge? See what he’s been up to lately.


From CardBoard to Kit

Really like the robot you just built and think other folks will too? Get some insight on what it takes to turn a robotics project into a product.


The Crow, the Skeleton, and the Pirate

Sometimes it’s just fun to do crazy things with robots.

Stepper motors have the ability to precisely turn a wheel at a calculated distance and also the ability to brake, which makes them an interesting choice for robot propulsion, but not without some some tradeoffs.


Making Robots with the Propeller Activity Board

The Parallax Propeller is experiencing a resurgence in popularity because of its unique feature set which offers a lot to robot builders. In the first installment of this new series, we’ll be upgrading our old friend, ArdBot into the new and improved PropBot.


Programming the Arduino in Basic

The Arduino is a popular microcontroller to use in robotics, but one of its best kept secrets is that you can program it in the Basic language instead of C.

Robytes
by Jeff Eckert
Stimulating Robot Tidbits (09.2014)
• Much Ado About Ants • Hands Off the Merchandise • He’s Just a Buddy • Flung Among the Dung • Goldie Goes Mobile

Then and Now
by Tom Carroll
Robot Evolution
Take a look at some of the exciting changes and progress made in the field of commercial robots.

My first attempt at a Fairyweight combat robot had been a failure when I built it to meet an imaginary 250 g weight limit, rather than the actual 150 g limit.

Robot Battles™ is the second oldest robotic combat competition in the world, and is a direct descendant of the oldest event — the Critter Crunch every year at MileHiCon in Denver, CO.