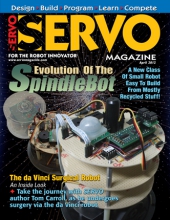 Meet some of the cool technology that is available right now that you can use to build a sophisticated sensor-based robot arm for a reasonable price.

Witness the birth of a whole new class of robots that can be affordably used for education and hobbyists.

Then and Now
by Tom Carroll
Robot-Assisted Prostate Surgery
Cancer! That’s a word we all dread to hear, whether about someone we know or especially concerning ourselves. As a reader of a robotics magazine, I’d like to take you on a trip into an operating room with a robot performing surgery on a person: me.

With a fresh pile of parts and Motorama just over a month away, I got a quick jump on assembling Nyx.


The History of Robot Combat: The Rise of the Insects — Part 1

For most of robot combat’s history, the mantra was “the bigger, the better." However, in the years immediately following the cancelling of BattleBots, the spirit of the sport changed to become even more grassroots and inclusive to new builders. Enter the Insect weight classes.