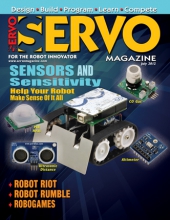 Sensors And Sensitivity - Help Your Robot Make Sense Of It All

Touch lets your bot determine its surroundings by making physical contact. Learn about a trio of common and inexpensive touch sensor types that you can add to your favorite automaton so it can get a sense of what’s around it.

In order for your robot to perform properly, it needs as much sensory data as possible. Unfortunately, physically increasing the number of sensors on your bot has potential problems. So, go virtual before completing your design.

This time, see what your VEX micro can do to heat (or cool!) things up.

GeerHead
by David Geer
Count on the ARTAS System For That New Head of Hair!
When hereditary or male pattern baldness strikes, who you gunna call? A surgeon using the ARTAS System for robotic hair restoration surgery, that's who!

Twin Tweaks
by Evan Woolley, Bryce Woolley
Big Trouble in the Little Dohyo
This time, we thought it would be a great idea to take a look at one of the most time-honored robotic events of all time: the mini Sumo competition.

Then and Now
by Tom Carroll
Sensors For Mobile Robots — Part 3
As robot experimenters, most of us want to keep abreast of the latest advances in any science and engineering aspect of our creations.


The History of Robot Combat: RoboGames

After the ending of BattleBots in 2003, a void was left in the world of robot combat competitions.