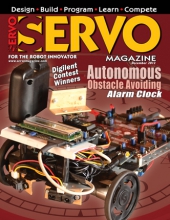 Power Beyond the Shield

If you are willing to accept a few limitations, there are expansion options that can provide both convenience and power beyond what standard Arduino shields offer.

This simple implementation provides a lot of functions that even beginners can sink their teeth into.

This “handy” glove can help with communication, as well as be a wireless controller in all sorts of applications.


Using a Stepper Motor Without a Microcontroller

The unique DC servo design described in this article uses a stepper motor as if it were a DC motor, and can be implemented with minimal electronics.

Part 2 of our quadcopter build goes over the design and parts breakdown.

Robytes
by Jeff Eckert, Jenn Eckert
Stimulating Robot Tidbits
New Era in Manufacturing?, Keep Your Mind (and Hands) Out of the Gutter, Not Being There, Firefighting Bot Hot Ticket, and No More Reaching for Salt and Pepper.

Then and Now
by Tom Carroll
Linear Actuators, Servos, and Motion Devices
In last month's column, I reviewed the typical rotary servos that we are so familiar with — those used as actuators for model airplane control surfaces or as drive motors for smaller tabletop robots. I also reviewed a few very large servos such as the Invenscience Torxis monster servos and a few tiny servos that weigh only a few grams each. This month, I would like to review a type of servo or actuator that not many of us ever implement into our robotic creations: linear servos and actuators.

Today's Beetles and Ants have drums and beater bars that can spin in excess of 20,000 rpm.

Grit your teeth, readers. It's what you've come to expect in December issues of magazines — the dreaded year-end retrospective.

Every year at Dragon*Con in Atlanta, GA, they host two robot combat events. On Sunday, it’s Robot Micro Battles, with one and three pound robots facing off.

In recent years, robot combat has expanded to have a large international following. Countries all over the world have adapted the sport in unique ways.