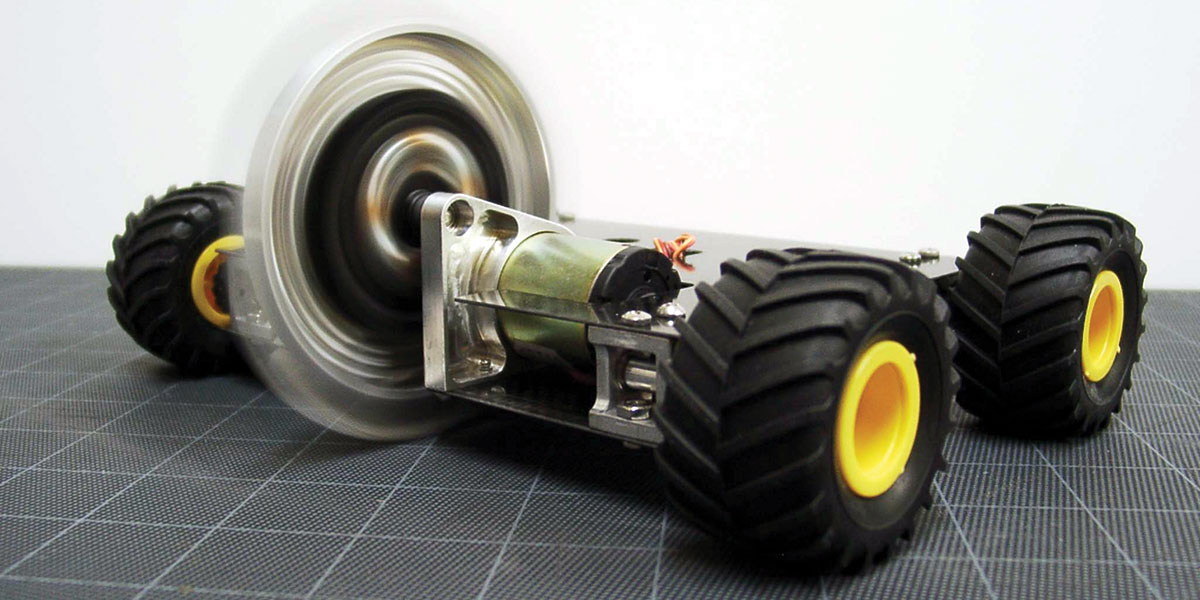 The History of Robot Combat: The Rise of the Insects — Part 1

This article was difficult to put together, to say the least. Once again, the robot combat builders haven’t proven to be the most diligent record keepers (with one notable exception). To our good fortune, though, the wonderful community racked their brains and pulled together a wealth of information on the development of the Insect class. So much information, in fact, that I’ve split the Insect discussion into two articles: one on Antweights and one on Beetleweights. As always, if you notice any holes or inaccuracies in our story, please contact SERVO and let us know. With your help, we’ll sort out the soap opera that is the history of robot combat.

For most of robot combat’s history, the mantra was “the bigger, the better.” In both Robot Wars and BattleBots™, the smallest weight class was 60 lb and with good reason. Many of the most memorable bots and some of the most exciting matches were from the Superheavyweight (340 lb) class. However, as these massive television spectacles began to end, the priorities of the sport changed. As I discussed in last month’s installment (The History of Robot Combat: Life after BattleBots), in the years immediately following the cancelling of BattleBots, the spirit of the sport changed to become even more grassroots and inclusive to new builders. Let’s face it; for many, even a 60 lb robot can be both too intimidating and expensive to build (recall Combat Zone editor Kevin Berry’s massive flop at Robocide in 2003, also discussed last month). Enter the Insect weight classes. The most popular Insect classes are Antweight (up to one pound) and Beetleweight (up to three pounds).

In addition to these are the 150 gram Fairyweight and the six pound Mantisweight. These scaled back bots were much less expensive and somewhat safer to build (although I will again remind you: All robot building is dangerous! And, while the blade on an Antweight might not take off your hand, it could easily take one of your fingers, so follow all safety precautions when building), making the Insect class attractive to new and inexperienced builders. As a result, in 2003 (the year after the end of BattleBots), the number of Insect competitions across the United States exploded. In this new era of robot combat, the Insect had become king.

Before I get into the history of the Antweight, I’d like to share my personal experience with the class. It was around this same time period that I was introduced to robot combat. My first event was at the SECR-sponsored The Capital Offense in July ‘03. I was nine years old, and shared an Antweight wedge called Babe the Blue Bot (a play off of Paul Bunyan’s companion Babe the Blue Ox) with my seven year old brother. I lost in the semifinals to Cuzin It, driven by Ross Embry from TeamPyramid, due to mechanical failures by Babe. 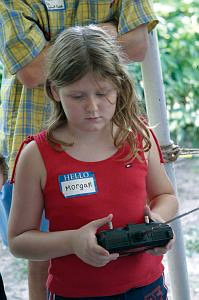 The author driving Babe The Blue Bot at the 2003 "The Capital Offense" event in Tallahassee, FL.

In the true spirit of the sport (and maybe because he just felt bad about beating a team of small children), Ross offered a friendly rematch to me, and I walked away with the pride of knowing I could have won the semifinal match if not for the mechanical troubles.

I was pretty regularly involved in the SECR matches in Florida from that point on, and in that time I discovered that the true kindness extended to me by Ross was not unique; it was simply how the builders treated each other. I also learned that, even as a little girl, I could hold my own against much older competitors (although, looking back on it, they may have been reluctant to aggressively compete against a 10 year old girl), and won my fair share of matches. My experience with robot combat was one of the most fun, exciting, and enlightening that I have ever had, and I look back on it with great fondness. 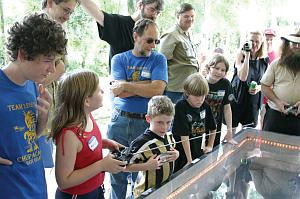 The author and the rest of Legendary Robotics around the Insect arena at TCO.

Readers who have been following this series might remember the importance of Denver’s Critter Crunch in the establishment of the sport. In addition to this, Critter Crunch can also claim a critical role in developing the Insect class.

Although Critter Crunch has used this Insect-esque weight class for years, the rest of the nation was slow to catch up. It would take many years before the rest of robot combat learned of this pint sized version of the sport.

In the late 1990s, the UK was experimenting with a variety of Insect weight classes. They eventually settled on the 150 gram “UK Antweight” (in the United States, known as a Fairyweight). United States builders learned of this weight class while competing abroad at the Robot Wars UK competition and on the popular Delphi Forum. A discussion soon began among US builders to adopt a version of the Antweight at home. Andrew Lindsey, one of the founders of NERC (North East Robotics Club) and Delphi Forum frequenter, recalls that “the idea of Antweight bots started with the UK competitors, but there it seemed to be a challenge of how to make the smallest possible robots rather than a low-budget entry class. They were using micro servos and receivers, and trying to figure out what the smallest weight was that still allowed for mobility and some kind of weapon, while the US Antweight class seemed to have been geared more towards low cost and ease of entry.”

Because of the differing priorities of the United States builders, they adapted the UK Antweight to an even 1 lb weight class, and the Antweight was (basically) born.

According to BotRank.com, the first recorded Insect competition took place at Gasworks Park in Seattle, WA on April 14, 2002. It was the first event ever hosted by WAR (Western Allied Robotics). Despite this, YouTube videos exist clearly showing Insect fights in 2000 at an event called CJRC (Central Jersey Robot Conflict) hosted by NERC.

Simultaneously, Sozbots was forming in southern California. Sozbots — which gets its name from an abbreviation of the term “16 oz bots,” — held its first event February 21, 2002, according to cofounder Eric Stoliker. Stoliker, along with Patrick Campbell, Brian Roe, and later Peter Abrahamson went on to run many successful Sozbots events.

Then — either by coincidence or an act of fate — BattleAnts was held as a demonstration at BattleBots 5.0 in May 2002. It was held outside of the venue for the larger BattleBots, and was an invitation only event for 16 builders. 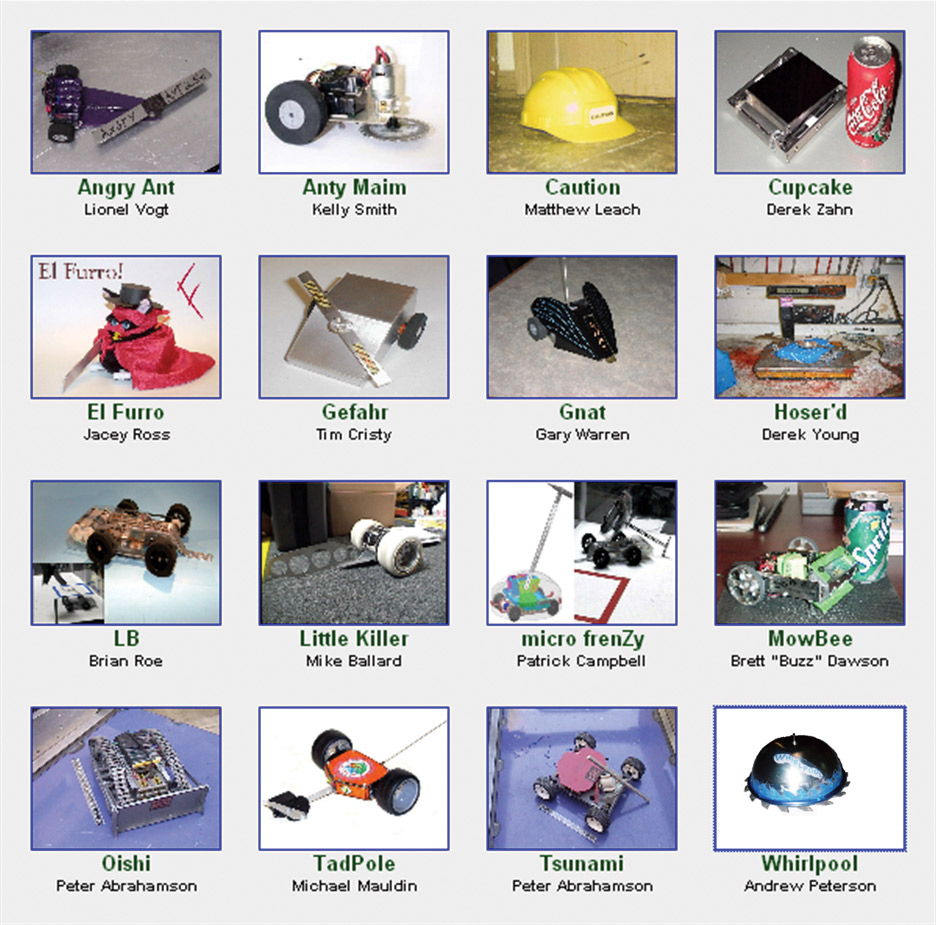 The 16 invited bots at the BattleAnts competition.

The specifics of this event are a little hazy; the brackets, for example, are nowhere to be found. By one account, the BattleAnts competition used the WAR arena and was hosted by SECR (South East Combat Robotics). In the photo, note the UI Productions logo (the company of SECR founding member Mark DeVits). 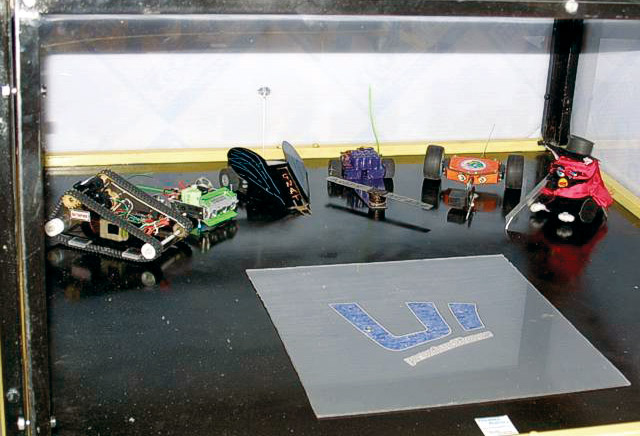 DeVits, as well as SECR founding member Chris Williamson, were key players in organizing the BattleAnts event. Williamson, like the Sozbots founders, also founded a successful online parts store called AntBotics.com which was later sold to the Robot MarketPlace. According to many sources (including a 2004 SERVO article), the founding members of Sozbots first came into contact with the Antweight class at this event.

However, a SERVO article written about the event in 2002 clearly shows the bots fighting in a Sozbots arena (see next photo).

Key members of Sozbots even competed at BattleAnts. The previous picture — although featuring many of the same bots that competed at BattleAnts — was probably actually from another event. Based on the evidence that I was able to find, it is clear that Antweight events were being held regularly in the northeast by NERC and in southern California by Sozbots before this 5.0 related event.

Despite the conflicting accounts, however, it is certainly clear that BattleAnts was the catalyst that sparked the Insect explosion of 2003; many became enchanted with the pint sized bots at that event, and set out to create their own. The overwhelming majority of the builders I talked to cited BattleAnts as their first taste of the Antweight class.

By 2003, the Insect class had exploded. Events were being held almost weekly all across the country. From the development of the Antweight class out of the UK Antweight fights, to its popularity after BattleBots 5.0, the story of the Antweight class is very much like robot combat as a whole. It was a group effort from a core of builders which sparked the development of the class; it rose to popularity in a matter of months, and is kept active today by a group of devoted builders who are extremely passionate about the little bots.

Come back next time for The Rise of the Insect Part 2: Beetleweights.  SV