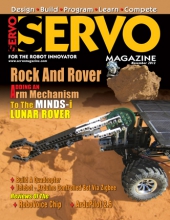 Rock And Rover! Adding An Arm Mechanism To The Minds-i Lunar Rover

RoboVoice will definitely give your robots something to talk about!

Meet Telebot — a convergence of ordinary robot with remote control abilities via Zigbee.


The ArduPilot 2.5 Autopilot Board and Mission Planner Software

If you’re an Arduino fan and want to build semi-autonomous planes, copters, or land vehicles, then this review is a must-read. This powerful plug-and-play graphical software is so much fun, it’s addictive!

Love quadcopters, but can’t af ford a kit? No worries! You can build your own by following along with this series. Part 1 offers an introduction to these increasingly popular multi-rotors.

Twin Tweaks
by Bryce Woolley, Evan Woolley
Rock and Rover
Along with everyone else that cares about science, human progress, and things that are just plain cool, we have been awestruck and inspired by the incredible success of the Curiosity Rover and the entire Mars Space Laboratory mission thus far.

Then and Now
by Tom Carroll
Servos
I wrote about servos in this column back in the beginning of 2008 when the Robotis Dynamixel rotary actuators had been available for a while for the robot experimenter.

After competing for a year with a two-wheel drive wedge named Kobalos, I decided to retire that robot and move on to something with an active weapon.

by Dave Graham
in The Combat Zone