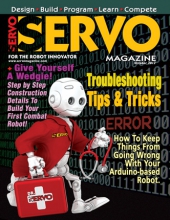 Troubleshooting Tips & Tricks: How To Keep Things From Going Wrong With Your Arduino-based Robot

How to Keep Things From Going Wrong With Your Arduino-based Bot. Not sure where to start when you need to diagnose a problem? This guide will help!

Each year, the American Society of Agricultural & Biological Engineers hosts a student contest which has a dif ferent agricultural theme. This year, participants had to navigate a scale model of a feedlot.

Take a look at the testing and setup of this flying robotics platform, including integration with an R/C transmitter and receiver, the selection and care of Li-Po batteries, plus the never-ending task of maintenance.

Give Yourself a Wedgie!

A wedge robot is a simple and durable design, and is the perfect platform for your first bot. Follow these construction details to build one for yourself.

GeerHead
by David Geer
Collaborating With Hubo
The HUBO robot platform is a four foot, three inch tall, fully actuated humanoid robot with similar joint movement to that of humans. HUBO’s legs, arms, hands, fingers, and thumbs work about the same as human’s do, as well.

Then and Now
by Tom Carroll
The Many Ways to Control a Robot
As designers and builders of our robotic creations, we still want some sort of control over our machines, even if the basic control is through autonomous sensor interaction with the outside world.

Irecently built and tested one of the prototype 1 lb drumbot kits from Kitbots.com as part of the development process, prior to the kit moving to production.


Clash of the Bots 3

Motorama Carolina Combat Robotics hosted its third Clash of the Bots on July 14 at the Schiele Museum of Natural History.


The History of Robot Combat: Robot Battles at Dragon*Con

Robot Battles at Dragon*Con in Atlanta, GA is one of the oldest robot combat events.

Platforms
by Bryan Bergeron
The pioneers in robotics faced and overcame numerous challenges. For example, if they wanted to develop, say, a new navigation algorithm, they had to first build a hardware platform. They couldn’t simply go online and decide between dozens of off-the-shelf flying, swimming, crawling, and walking robotics platforms.