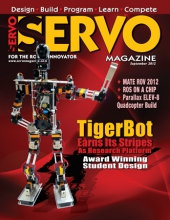 Wrap-up of this year’s event held in Orlando, FL.


A Robot Operating System On a Chip

Building a robot from scratch can be a daunting task for both beginning and advanced hobbyists. The newly available RobotBASIC ROS on a Chip makes the whole process easier and faster by providing a physical interface from simulations to the real deal.

Ready to take your robotics experiments to new heights? Then follow along with this helpful kit build that will have you up and flying in no time.


Electronic Messaging With Your Robot

Water and things electrical normally don't mix. That's probably why you never see a robot lick a stamp. Electronic messaging is the safer solution for a robot that wants to put a note in your mailbox. This time around, we'll explore what it takes to have your mechanical animal put an electronic note in your inbox.

Twin Tweaks
by Evan Woolley, Bryce Woolley
The Cobra Strikes Again
The process of optimization is often just as important as the initial design, and we knew that the Cobra chassis deserved more effort on our behalf to unlock the kit’s true competitive potential.

Then and Now
by Tom Carroll
Sensors for Mobile Robots — Part 4
I want to cover some of the more unique sensors in this final part, such as visual image and voice recognition sensors.

In this final part of my Army of Ants series, I will describe how I made the drum for Siafu and completed the rest of the bot build.