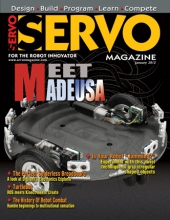 Parallax MadeUSA — The Big Robot That Could

This review will introduce you to the newest addition to the Parallax robotic arsenal.


Getting a Grip on Jamming

Learn more about this novel technique that is a whole dif ferent concept from traditional grippers.

Take a closer look at Digilent’s Electronics Explorer and how you can use it as a microcontroller stimulus generator and virtual logic monitor.

Ifound out recently that there are very few DSM2 receivers with programmable failsafes available when I decided to replace the Spektrum BR6000 receivers I had been using with a DSM2.

I often get asked where I get my machining done, and unless I’ve done it myself, my answer is always teamwhyachi.com.


BUILD REPORT: Rollin’ With the Punches

Win or lose, the best combat robots always put on a show. That means no drive system failures unless your robot is in pieces. Bigger bots can achieve this through redundancy: four motors, four speed controllers, etc.

by David Graham
in The Combat Zone

Fighting robot enthusiasts from Miami to Michigan and their 47 insect class fighting robots journeyed to the Chicago suburb of Rosement, IL to do battle in the 5th Annual Mecha-Mayhem fighting robot competition


The History of Robot Combat: From Humble Beginnings to Multinational Sensation

Long before the glitz and glamour of Comedy Central’s BattleBots™ brought mass appeal to the sport, robot combat had much humbler beginnings.