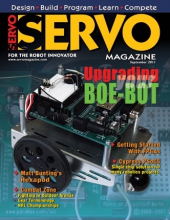 The Cypress PSoC is a programmable “system on chip” device which includes all the functions of a traditional microcontroller, in addition to programmable analog and digital blocks. This combination allows for a single chip solution for many robotics projects.


Getting Started With FPGAs — Part 1

FPGAs are ICs found in some of the latest electronics products. This two-part series begins with a quick introduction to field programmable gate arrays to get you started experimenting with them.

This time, we’ll replace the manual switch control with fully automatic electronic function, so our robot will react to light.

Beef up your Boe-Bot to do more than humanly possible ... well, sort of.

Robots fight. We all know this, and it is why we read this section of the magazine. However, where, and when

Every builder — even the most seasoned veterans — have experienced more than one “Oh no, what have I gotten myself into?” moment when working on a bot.

by Nicholas Ozorak
in The Combat Zone

It was may 21, 2011. In an airplane hanger at the edge of the Indianapolis International Airport, I could hear crashes, clanks, and the hum of tools being used.