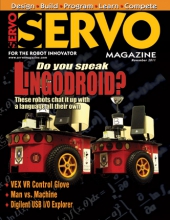 A Play Day With Sunray

So many radios ... so little time. This month, Fred takes you to his sandbox. An RF sandbox, that is. However, you won't find any shovels or buckets in this box. And, the building material isn't sand. It's silicon building blocks that have been specifically engineered to emit radio waves.

This final installment completes our journey with a look into the final hardware design and functionality of the laser range finder.

In this fourth installment of our bot build, you’ll connect and program an Arduino Uno development board to run your robot in circles — literally!

Since the last build report was written, Apollyon has competed at Motorama. Apollyon took terminal damage there while achieving a 3-2 record, and yet again needed a complete rebuild.

My 12 lb Hobbyweight bar spinner Surgical Strike had a problem at the last couple of events...


FEATURE: So, You Want to Cut Metal on Your Table Saw?

Like many bot builders, I started out as a woodworker. So, I have a shop full of woodworking tools and, now, a serious bot building jones.