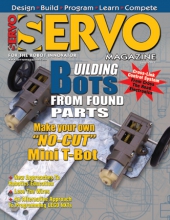 Now that you have a better idea of what a CPLD is and what it can do, it’s time to introduce and begin using HDL (hardware description language).

Find out about a new 8051-based powerhouse that will allow you to lose the wire connection to the microcontroller in your robot.

LEGO makes building robots easier, and now programming a LEGO NXT can be just as easy. Learn about the open-source LegoLibrary.bas.

A UART/SPI Monitor for Your Micro — Part 2

This month, we’ll finish off the tool that lets us “peek under the hood” of our controller and then we’ll put it into a useable housing.

There’s virtually no limit to the number and type of items you can use in your robot projects. Find out just how easy it is to build your own “no-cut” robot out of ready-made parts available at your local hardware store.

Twin Tweaks
by Bryce Woolley, Evan Woolley
Twin Tweaks
Why Did The Robot Cross The Road?

Moros is the third generation of my angled bar spinners. Ruiner was the original, and was built for RoboGames 2006 where it finished with a 1-2 record after having the antenna removed in the second match, which resulted in a forfeit in the third match.


The Reality of TV

An Opinion Piece by Pete Smith