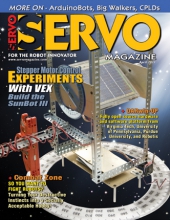 We’ll get right into some CPLD programming and look at breadboarding and testing, as well.


Give Your Robot the Bootloader

Bootloading provides a very useful layer of control. Once the base bootloader code is loaded into your robot’s program Flash, you can read, write, and erase it without having to use a hardware programmer.

Making Robots With the Arduino — Part 6

This time, build a simpler version of the SunBot with beefier stepper motors that are powerful enough to directly drive the solar panel’s azimuth and elevation axes.

Part 3. This segment focuses on the design and implementation of the bot’s multi-processor distributed processing system.


So You Want to Fight Robots?

Turning Your Destructive Instincts into a Socially Acceptable Hobby

The 2011 Chattanooga Robot Battles event was held on Saturday, January 22nd at the Chattacon Sci-Fi convention in Chattanooga, TN.

by Collin Berry
in The Combat Zone

Joey Daoud, a BotsIQ veteran and film school graduate, has produced a documentary about the sport. SERVO was given the opportunity to do a pre-release screening. We enlisted a journalist of similar age and background to review this interesting video.