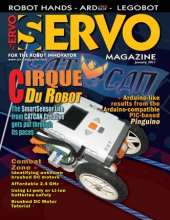 See the big-time participants and the ultimate winner in this classic clash of the titaniums.


A New Paradigm in Hobby Robotics

Many industries successfully use the “simulate then deploy” principle. Apply it to your next robot build and you’ll soon see the advantages to this technique.

Pinguino is an Arduino-like board based on a PIC microcontroller. This article explores some of the features of the EDTP Electronics Emperor version ... and only hits the tip of the iceberg.

Meet Eddie 2.0 — the next generation of LEGO MINDSTORMS design.


Making Robots With the Arduino — Part 3

Inside the Arduino. This time, we’ll learn more about the Arduino and its programming.

GeerHead
by David Geer
Getting A Grip: Fingerless Robot Hand Grabs, Carries, Pours, and Writes
What can you do with a latex balloon, some coffee grounds, and suction? You can create a universal jamming robotic gripper hand that can pick up anything.

Twin Tweaks
by Bryce Woolley, Evan Woolley
Cirque Du Robot
This month, we have the opportunity to demonstrate both – an expandable platform with the LEGO NXT kit, and a multitalented sensor with the SmartSensor Lite from CATCAN Creative, Inc.

Then and Now
by Tom Carroll
Robot Hands
Over the years, I’ve discussed all sorts of robot manipulators and arms, but most of these have been related to industrial applications.

The principal radio frequency for many years in USA combat robotics was 75 MHz PCM.

by Steven Nelson
in The Combat Zone

I recently got back from COMBOTS 5 where I was the arena wrangler. Basically, my job was to provide safety and also train several new wranglers in the procedures used in running an event. A wrangler’s job is not an easy one.

The Queensland Robotics Sports Club teamed up with The Edge to present two full days of remote controlled carnage on November 27th and 28th.

by Bradley Hanstad - Team Think Tank
in The Combat Zone

Editor’s note: One thing the general public might not know about combat bot-ka-teers is they have a terrific sense of humor. The nature of the sport also makes them very “accountable.” In this episode of “Kids, please don’t gamble,” Bradley learns an important life lesson!