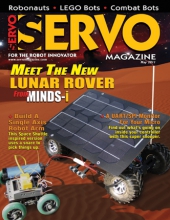 Making Robots With the Arduino — Part 7

Putting It All Together.

This installment shows you how to simulate your digital logic design in Xilinx Isim.

Arm your robot with this Space Shuttle inspired version that uses a snare for picking up objects.


A UART/SPI Monitor for Your Micro

Need to see what’s going on inside your controller or what it is saying to its peripherals? This SPI/UART snooper might be just the ticket. It is done in surface-mount on a universal SMT prototyping board, just for fun.

Part 4. This final article will focus on the algorithm used to create a simple walk.

Kobalos is a miniaturization of my 12 lb robot, Apollyon. The basic idea was to build something that would be as close to indestructible as possible.

When designing the latest versions of my 12 lb wedge and 30 lb bar spinner, I decided to look for an alternative to my relatively large and heavy Victor 883 speed controllers.