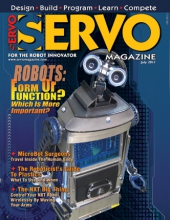 Robots: Form Or Function? Which Is More Important?

Over 10,000 participants joined in this classic competition that included not only VEX events, but also BEST match-ups, Coast Guard AROW water robots, plus the first Boy Scouts to earn the new robotics badge.


Meet the Swiss Army Knife of Robotics: the Cerebot 32MX7

Whether it be robotics, remote control, telemetry, Internet services, CAN networking, or an I/O intensive application, the Digilent Cerebot 32MX7 board plugs physically and logically into the center of the action.

For many hobbyists, giving their robot the gift of sight is one of their ultimate goals. RoboRealm is an application that can make adding vision painless by providing easy-to-use modules.

For the last installment of this series, we incorporate a CPLD to control a mobile robotics platform.


Adding Smoke, Gas, and Heat Detection to Your Robot

Create your own “safety bot” by attaching sensors that can detect smoke, poisonous gasses, and high temperatures.

MANUFACTURING: The Roboticist’s Guide to Plastic

Plastic has become an integral part of our society. It holds our food, is found in our automobiles, and is even on and in our bodies. It also makes a great building material for robotics.

A higher rotational speed gives a bigger hit but it also reduces the bite.

The Museum of Life and Science in Durham, NC held its fourth annual “Robot Rumble” on Saturday April 16, 2011.