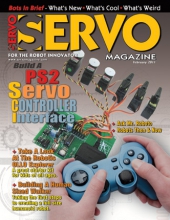 Take an indepth look at this great robot starter kit for kids of all ages.


Making Robots With the Arduino — Part 4

Getting Feedback With Sensors.

If you’ve ever wanted to build a full size humanoid robot, here’s your chance. Part 1 will get you started with some basic ideas and concepts.


Control Your Steel Army With the RPM3

The Radio Packet Modem 3 is not your average embedded radio. You can communicate with one steel soldier or a whole platoon.

This interface allows you to control six hobby servomotors using a PS2 controller.

by Don Hebert
in The Combat Zone

The 18 volt DeWalt drill is used by many robots in the 30 pound and up category.

by Don Hebert
in The Combat Zone

Ihave worked with embedded microcontrollers for many years. So, when I began building combat robots in 2001, I was tempted to automate something.