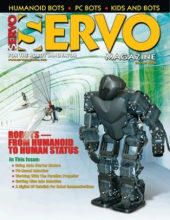 Robots - From Humanoid To Human Status

Counting On The Tried And True Schmitt Trigger

For this year's Science Olympiad competition held in my home state of North Carolina ([url=http://www.sciencenc.com]http://www.sciencenc.com[/url]), my team was challenged to build an electric vehicle that would go a given distance and then stop. Our first car used a 555 timer circuit, but it did not give u s the accuracy we wanted. To be effective in the state competition, we needed a much better way to actually measure the distance the car went. Since we had built the car using the Vex Robotics kit from Innovation First...

Part 2: PC-based Robotics In this series of articles, we will explore my Pico-ITX based Johnny 5 project. In the first article, I detailed the work that went into upgrading and expanding the original kit to make it a more viable research platform. In this article, I will dive into the concept and implementation of PC-based robotics. Not only will we show how easy an onboard PC is to integrate, but we will begin to explore the many advantages of having that much horsepower locally on your robot.

Every year I go to RoboGames ([url=http://www.robogames.net]http://www.robogames.net[/url]), I am impressed with the quality and diversity of the robot events and even more impressed by the people who participate. This is the largest event of its kind on the west coast. Located in San Francisco, CA, this is the perfect place for engineering talent and artistic creativity to merge.

A stock NXT can get pretty boring pretty quickly. Want to soup up this Honda Civic and turn it into a Lotus Esprit? Well then keep reading!

Wire is a wonderful thing. There’s not much that is more reliable than a short piece of stranded or solid copper wire between the ends of an electrical connection. However, there are situations where electrically tying devices together with long runs of wire is impractical. Light does a good job of replacing copper when the conditions are right, but if one needs to move electrons reliably over a relatively long distance there’s no better conductor than the Earth’s magnetic field...


Getting Control With the Propeller | Part 2 | Controller Servos

When designing a product that will sell millions of units, every cent counts, so engineers will often use very creative methods to program a single microcontroller to handle multiple tasks. These tricks can be difficult to comprehend, let alone implement. For one-time projects — especially for hobbyists — programming a second inexpensive microcontroller to perform the task achieves the same results but requires significantly less time. To simplify programming even more, many manufacturers sell..


Get A Starter Motor Runnin’ In Your Robot

Auto starter motors are often overlooked for use in robot building. But, with a few hours and a few modifications, they can be a good replacement drive motor for your combat or other short duty cycle robot. Plus, they are inexpensive and readily available.

Robytes
by Jeff Eckert
Fecundity Begets Rotundity
If you tip over the average robot, all it can do is thrash around helplessly until someone picks it up. But being round and without external appendages, the Groundbot™ from Rotundus ([url=http://www.rotundus.se]http://www.rotundus.se[/url]) is always upright. It also can move through mud, snow, and sand without getting stuck, and, being hermetically sealed, is pretty much impervious to environmental threats. It’s also tough enough to survive drops of up to 10 ft (3 m)...

BasicBoard Robotics
by William Smith
Hardware Serial Port Adapter
I’m working on a new robot application for the BasicBoard from Beginner Electronics.com. I chose one of the tractor type bases from budgetrobotics.com as seen in Figure 1. This is a great little base to build a robot from. In the process of doing this, though, I wanted to get the expansion serial port on the BasicBoard working for future add-on sensors and other future ideas. That extra serial port connection ends up pointing to the front of the robot so this could be really handy...

Robotics Resources
by Gordon McComb
Getting Kids Into Robotics
Robots and kids go together like bacon and eggs, peaches and cream, resistors and capacitors. Thanks to low-cost construction kits — and not to mention popular movies that glamorize automatons — more and more children are exploring the world of robots.

Appetizer
by Camp Peavy
RoboGames: RoboMagellan 2008
It was a chilly June day above the Ft. Mason Center, San Francisco at the Great Meadow: 14 teams entered; eight took the field; five touched the goal; three touched the goal plus two bonus cones. “Zippy” and “Intrepid” traversing over 500 feet touched both bonus cones and the goal in exactly five minutes: 28 seconds ... a tie for the gold medal.

Then and Now
by Tom Carroll
Robots - From Humanoid To Human Status
I take a lot of technical magazines, more than my postman or wife care to see. Many of them have very interesting viewpoints on technology and robotics. One is Managing Automation — a magazine concerned mostly with implementation of factory automation and robotics. MA has a monthly e-newsletter that covers many automation subjects. The August 1st issue had an interesting article entitled “More Human than Humans” by MA Editor-in-Chief, David R. Brousell...

When building a robot for someone else, I always listen to their design brief, put together a concept, and build to that design.

There are many ways to move your robot around the arena floor. From the simplistic two wheel drive robot to the precision crafted complexity of a true walking robot, there are always different methods of movement to consider.

by Paul Reese ,Robert Wilburn
in The Combat Zone

In the early days of combat robotics, builders were often forced to assemble their own battery packs if they wanted something robust that would tolerate conditions filled with shock, vibration, heavy G-loads, and constant flexing all while operating at very high temperatures.

When first venturing into combat robot building, I, like most, began with RC car speed controllers. It quickly became apparent that even the most highly rated controllers were not robust enough to handle the power demands of the 30 lb class.

John Findlay — head honcho of the United Kingdom’s Roaming Robots — was commissioned to do a show in the Middle Eastern country of Qatar. He graciously provided details and photos to Combat Zone for this article.

Size Matters
by Bryan Bergeron in Mind / Iron
When Parallax announced their new 12 VDC motors with mount, wheels, and position controller, I couldn’t resist picking up a kit ($280). Finally, a ‘standard’ drive system designed for medium-sized mobile robots from the company behind the BASIC Stamp and the Boe-Bot...