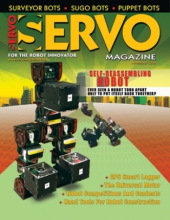 My interest in robotics has always been very diversified and I too have always been fascinated with the idea of creating the illusion of life. Perhaps that was a motivating factor that pushed me towards another of my hobbies — ventriloquism. It occurred to me that the techniques used in puppet construction might be of interest to many hobbyists interested in animatronics. A typical ventriloquist puppet is carved from wood or molded from some form of composite material such as plastic wood...

In this third article, I will show some of the software advantages of having an onboard PC. While I used the Lynxmotion Johnny 5 kit as a platform for my project, the principles, concepts, and even components of this project can be applied to almost any robotics platform.

When I moved to Garrett County (a rural community in western Maryland), I really wanted to start a robotics club. I’d been working in underwater robotics for about 20 years, and I figured it was time for me to give something back to the community in the way of fun technical challenges for the area kids. Underwater robots are tough to build (water and electricity just don’t mix), so I decided that Sumo robots were the perfect place to start...

Electric motors come in a seemingly endless variety of shapes and sizes. If you’re into robots and mechanical devices that move about freely, DC (Direct Current) motors capable of operating on battery power are almost always your most practical motor choice. However, not every robot created by man or alien is a fully mobile Robby running around on forbidden planets. If your robot is a stationary collection of nuts and volts that’s at home working next to a wall outlet, you may be able to use...


Getting Control With the Propeller | Part 3 | Stepper Motors

In this part of the series, we will take a “step” (bad pun intended) into the world of stepper motors. We will look at bipolar steppers in particular and some methods to improve their performance.

I recently did a GPS series covering various GPS modules and their interfaces. A project that I have had in mind for a while was a small GPS Smart Logger. I call it a smart logger because in addition to the GPS data, you can log various other telemetry. You can also set the conditions and type of GPS data that gets logged...

Robytes
by Jeff Eckert
Bot Gets Bio Brain
Placing a functioning human brain into a robot is still well within the realm of science fiction, but some folks at the University of Reading ([url=http://www.reading.ac.uk]http://www.reading.ac.uk[/url]) have created a biological brain of sorts and hooked it up as a robot controller. It has been known for some time that cultured neurons are somewhat like ants that have been scattered away from the anthill in that they can no longer function as a single unit. However, when interconnected in a culture dish, such neurons form simple...

GeerHead
by David Geer
A Self-Reassembling Robot
Ever seen a robot torn apart only to put itself back together? Jimmy Sastra, a student in the Modular Robotics Lab at the University of Pennsylvania has. He helped create it. As with most scientific endeavors, the Robotic Self-Reassembly After Explosion (SAE) project was a solution to a problem: how to get a robot to reassemble itself after ‘disassembly’ by ‘explosion’ (“Towards Robotic Self-Reassembly After Explosion,” the Modular Robotics Lab, University of Pennsilvania, Mark Yim, et.al.) ...

Twin Tweaks
by Bryce Woolley, Evan Woolley
Surveyor’s Travels
The folks at Inertia Labs may have forever earned a celebrated place in the memory of combat robotics fans with their formidable and uplifting creations like Toro, but Alexander Rose and Reason Bradley have also put their energies into other, less destructive projects. One of their new endeavors at Inertia Labs is as a designer and distributor for the new quad motor Surveyor SRV-1Q from Surveyor Labs — a nifty little treaded robot outfitted with a high quality camera. Perhaps the most...

Robotics Resources
by Gordon McComb
Hand Tools for Robot Construction
Imagine robot building during Neanderthal times. Your only tools were various rocks, maybe an antler or two, and wood sticks that everyone else in your camp used for throwing at animals they wanted to eat. This most certainly made constructing that perfect line follower very difficult. Be grateful you live in the 21st century, where tools are the mainstay of our industrial existence. Starting with just the lowly screwdriver, an assortment of the right tools and the right time helps you build...

Appetizer
by R. Steven Rainwater
Why Just Build a Robot? Be a Robot!
A-Kon is North America’s longest running national anime convention. It was first held in 1990 and it has been growing ever since...

Then and Now
by Tom Carroll
Robot Competitions and Contests
As long as there have been two people gathered together who have different ideas and skill sets, there have been competitions of some sort. The recent Summer Olympics was an extreme example of the world’s finest who gathered together in China to prove who the best athlete in many categories was. Old records fell as younger or more experienced athletes swam or ran faster than ever before, jumped higher or further, or performed some series of athletic motions with more finesse than the others...

Frequently at events, I am inundated with questions on how to get started in combat robotics. I’m always honored by the requests, and enjoy the enthusiasm that potentially new builders bring to the sport.


Even More Things to Consider When Building a Fighting Robot

In previous issues of SERVO, I’ve talked about weapon and drive systems in robot combat. There are a lot of important things to consider that don’t fit under either of those umbrellas but still merit consideration when building your bot.

by Charles Guan
in The Combat Zone


A Brief History of WAR

by Rob Farrow
in The Combat Zone

WAR has much of what you expect — flying shrapnel, destruction, winners and losers, but unlike real war, Western Allied Robotics competitions are always good natured fun.