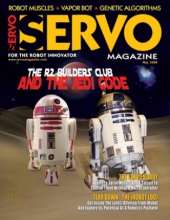 Cover Story: The R2 Builders Club And The Jedi Code

The treaded, weatherproof, remotely controlled Looj from iRobot is intended to facilitate the dull, dirty, and often dangerous job of clearing gutters of leaves, pine cones, twigs, and other light debris. At $99, I couldn’t resist exploring the potential of the Looj as a robotics platform. Following is a tear down of the Looj and wireless controller...


The R2 Builders Club And The Jedi Code

A long time ago (1999), in this galaxy, in a continent far, far away from North America, Australian Dave Everett began the R2 Builders Club (R2BC), established for people interested in building 1:1-scale R2-D2s.

Extra sensors, original sensors, wireless operation, autonomy, and programming | I hope that those of you following this series have learned a few new things! The previous articles have primarily focused on the hardware aspect of reviving BOB. They have covered taking an empty robot shell, adding a new brain with larger H-bridge drivers, working with the sonar sensors, and adding a co-processor to help offload tasks from the main processor. This article on BOB will cover adding some extra...

Control a servo without a microcontroller.


Designing and Building a Robot from Scratch | Part 3

Next, we chose a frame type and the components along with determining the ideal layout. We completed the design of the robot (shown in Figure 1) and now we are ready to discuss final preparation before the actual construction phase!

As a robotician,think about all of the neat things that you have direct access to by way of the pages of SERVO. For instance,Parallax offers a variety of sensors that include a PIR (Passive Infrared) sensor,a color sensor, and a combination temperature/humidity sensor to name just a few. Digging deeper into a SERVO magazine I’m reading at the moment reveals a company called Maxbotix that is offering an ultrasonic sensor they call MaxSonar. If you want to sense with IR, you have the resources...

Robytes
by Jeff Eckert
Robytes | May 2008 | Chatty Cathy Reincarnated
The concept of a mechanical talking adolescent isn’t exactly new, with the terminally cute Chatty Cathy dating back to 1960. But while Cathy — at her peak —could only speak 18 phrases, the iCub, designed by the RobotCub Consortium ([url=http://www.robotcub.org]http://www.robotcub.org[/url]), may soon be generating complex conversations on its own. An international group, led by the University of Plymouth ([url=http://www.plymouth.ac.uk]http://www.plymouth.ac.uk[/url]), began its Integration and Transfer of Action and Language Knowledge in Robots (ITALK) program on March 1 ...

GeerHead
by David Geer
The Northern Bites RoboCup Team
RoboCup was born to call attention to artificial intelligence and intelligent robot research, according to RoboCup.org. The subsequent contests and competitions challenge roboticists from various colleges and universities around the world to build the best AI robots and prove their achievements by winning all-robot soccer meets. Playing soccer (football outside the US) requires robots to demonstrate many of the emerging technological capabilities that AI must rely on...

Different Bits
by Heather Dewey-Hagborg
Artificial Life | Part 2 | Genetic Algorithms: Hello World
Last time, we talked about the theory behind genetic algorithms and looked at an abstract example of how they work. In this month’s article, we will implement a simple example on the PIC to understand the details and difficulties of doing this kind of programming on such a limited processor...

Twin Tweaks
by Bryce Woolley, Evan Woolley
Geeking From France
This month, we have the privilege of introducing an intrepid robotic envoy all the way from France, courtesy of POB Technology. We were lucky enough to receive the POB Golden Kit, which includes a fully assembled robot, a software CD with an electronic manual, and a serial cable for programming. The robot is equipped with tank treads, a camera, and a claw for manipulating objects. The easily accessible circuit board boasts plenty of open terminals for the addition of sensors and mechanisms...

Robotics Resources
by Gordon McComb
Robot Builder’s Bookshelf Redux
Despite fancy multimedia, Flash animations, and free Internet tutorials, the lowly book remains the most popular way of learning about a new subject. Books are portable and can be read when traveling, while waiting for your hamburger, or at home beside the fireplace. If you own the book, you can mark it up with a highlighter, or paste Post-It Notes on your favorite pages so you can return to them quickly later. And, unlike Web pages and many other Internet resources, your book won’t catch a ...

Appetizer
by Robin Lemieux
Building Character through ... Robot Building!
For the last two decades, I've been surrounded by robots and electronics. Could I recite Ohm's Law? Could I tell you what a capacitor does? Do I know the difference between servo and stepper motors? Is there a difference? Do I know how to design and build an autonomous robot? This last April marks 20 years of working at T&L Publications for me — publishers of Nuts & Volts and SERVO Magazine. I have proofread literally thousands of technical articles, but probably couldn't tell you what most...

Then and Now
by Tom Carroll
Robot Muscles - Electric Motors
What would a robot be without their version of muscles? Well, maybe it would be just a computer. Now, that’s not so bad if all you want to do is input data and information via a keyboard, CD-ROM, voice or some other means, have the computer do something with that information, and then have the computer store or output that data onto a screen, printed page, a speaker, or some other passive device. Most of us enjoy our computers quite a bit, but we expect some sort of movement from them...