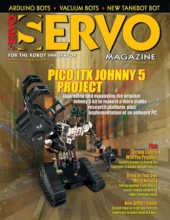 Getting Control With the Propeller | Part 1

Recently, an artist friend asked me how he might go about automating his latest masterpiece using a BASIC Stamp®. After looking at what he had, it turns out he was going to need to control DC motors, hobby servos, and stepper motors. While there are solutions for controlling all of these devices it would generally mean having three separate controllers (one for each device). A better solution would be ...


Bring Up Your Own Mesh Network

Despite what most folks think, the science of robotics is not based on mobility and motion alone. Say the word “robot” to most anyone on the street and they will assimilate the word robot to a mobile humanoid-like mechanism that has superhuman intelligence and strength. In reality, Earth-bound robots have the ability to weld, cut, saw, drill, wash dishes, wash your underwear, wash your car, and cook your dinner...

I have built many robots in the past and the drivetrain always causes most of my grief. The type of drivetrain you decide on will dictate some of the factors used in the design of your robot, including its size and how many batteries it can carry. Since I am going to be building two robots, I think it’s important that I give them names to make referencing them throughout this series easier...

In this series of articles, we will explore my Pico ITX based Johnny 5 project. We will detail the work that went into upgrading and expanding the original kit to make it a more viable research platform and we will also dive into the concept and implementation of PC–based robotics. Not only will we show how easy an onboard PC is to integrate, but we will explore the many advantages of having that much horsepower locally on your robot. While I used the Lynxmotion Johnny 5 kit as a platform for...

Welcome to SERVO Magazine’s Tankbot kit series. We have put together a unique beginner robotic platform that will continue to grow and expand with you as you move from newbie to novice to seasoned pro. We will also have regular editorial coverage to challenge you through your learning process with projects and experiments. To purchase the kit, go to the SERVO Webstore and place your order. If you’re ready, let’s get started...

Robytes
by Jeff Eckert
More Little Ones
One of the latest additions to the world of artificial arthropods is the Hexbug Crab from Innovation First, Inc. ([url=http://www.innovationfirst.com]http://www.innovationfirst.com[/url]). The company specializes in providing control systems for educational robot competitions worldwide. The minirobots are geared toward kids, but Crabbie is proving to be a fine companion to the stress ball on your desktop...

Twin Tweaks
by Bryce Woolley, Evan Woolley
Rhyme of the Modern Submariner | Part 2
Last time, we detailed the build of our basic ROV (remotely operated vehicle) for the MATE 2008 ROV Competition using the ROV-in-a-box kit from !nventivity and the help of UCSD’s Tau Beta Pi chapter, CA Psi. After building a very basic working ROV from the kit and proving its functionality at the Southern California regional competition, it was now time to add onto the kit bot with our own mechanisms to allow it to complete three missions based on a scenario of mid-ocean ridge research...

Robotics Resources
by Gordon McComb
Building Robots with the Arduino
The name Arduino may sound like some newly discovered quantum particle, but it’s actually a small and affordable microcontroller development board that is enjoying a rapid upsurge in popularity...

Different Bits
by Heather Dewey-Hagborg
Artificial Life | Part 3 | Genetic Algorithms: Interactive Evolution
The mathematical possibilities are exciting, but Genetic Algorithms can also be beautiful and it is this artistic and aesthetic potential we will be exploring in this article.

Appetizer
by Pete Smith
Judgement Day
I have competed in many robotic combat events and taught classes about the basics of that part of the hobby, but I have never judged any sort of competition. It was with a little trepidation then that I accepted a request to be a judge at a FIRST Tech Challenge (FTC) Regional Championship held at the NC A & T State University in Greensboro, NC...

Then and Now
by Tom Carroll
Mechatronics: The New Word in Robotics
I just read an interesting article in the June 30th Design News Webcast entitled “A Mechatronic Marvel: The Barcode Scanner.” The statement was made: “There are few things in the world today that would disrupt society more than if barcode scanners stopped working. Just think of all the places where you rely on one to accomplish some task. But what is a barcode and how does a barcode scanner work? This webcast explores the role of mechatronics in the development of this nearly indispensible...

Due to the weight limitations in the smaller, insect-sized robots, it is often hard to come across designs other than the powerful brushless motor spinners or plain ol’ wedge robots. Frustrated by this, I set out to build a unique ant weight robot (1 lb) that would also be competitive with the current generation of combatants.

Fighting robots need to be strong. They also have to fit within a weight limit. This leads to a trade-off between building something capable of taking the forces we impose upon them and the amount of weight we have available for structures.

by Darci New
in The Combat Zone

Ihave gone to RoboGames for quite a few years now and each year we have a wonderful time. It is awesome to see all the different types of robots and technology that come together in one place. There are many different events that go on throughout the weekend: soccer bots, Sumo bots, walking humanoids, robots that dance, art bots, hockey bots and, of course, combat robots.


Terminal Blocks Made to Order

Read the robot forums and everyone agrees: Crimp-on ring terminals and terminal posts are the most reliable means of making high current connections. The problem is there are a limited number of suitable commercial products and they are often the wrong size and shape, or made of brittle materials.