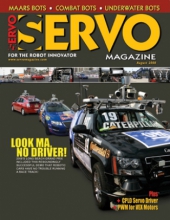 The hobby servo is an amazing device. The typical hobby servo is a collection of plastic or metal gears driven by a DC motor, which is under the control of a specialized motor driver IC and a feedback potentiometer. Back in the day, one would find hobby servos in most every model airplane and model boat. If you really put a brain cell to it, radio-controlled model planes, cars, and boats are actually specialized types of robots that depend greatly on the controlled motion provided by a hobby...

Build a PWM Circuit to run a VEX Motor

As part of this year’s Science Olympiad competition, the students were tasked with building an electric car that would go a certain distance and stop. While the Vex Robotics kit from Innovation First is ideal for building such a vehicle, the competition restriction on batteries precluded the use of the 7.2V NiCad that the Vex controller uses. Fortunately, this gave an opportunity to experiment with other ways to drive the Vex motor and control the car...

WARNING! Before you read any further, I feel it only fair to warn you that this series is going to be akin to a very fast roller coaster ride.Over the years, I have built several robots of various shapes and sizes. Most of them were controlled by a microcontroller of one form or another. I have even built a few that were tethered to a desktop computer. It’s time to build a robust robot with an on-board PC computer. This will not be a toy. In this series, I am going to build two robots around ...

Robytes
by Jeff Eckert
New Hopperbot Sets Record
Mechanical jumpers are nothing new, but one that was unveiled at the IEEE International Conference on Robotics and Automation appears to have, um, leaped ahead of its competitors in terms of jump distance. The tiny, 7 g mechanical grasshopper can jump 1.4 m, which is said to be 10 times farther — relative to its size — than any other existing jumping robot. The little bug was developed at the Laboratory of Intelligent Systems at the Ecole Polytechnique Federale de Lausanne (EPFL, [url=http://www.epfl.ch]http://www.epfl.ch[/url])...

GeerHead
by David Geer
MAARS Robots Taking Off for War
In 2005, I covered the SWORDS (Special Weapons Observation Reconnaissance Direct-action System) maneuverable military robots, which soldiers use as scouts and remote weapons systems in the war in Iraq. As reported, the SWORDS iteration of the robotic sentry is compatible with M16s, M240s, M249s, Barrett 50 calibers, 40 mm grenade launchers, or M202 anti-tank rocket systems. The SWORDS have many other features including advanced sensing. The robots use these technologies to locate enemy...

Twin Tweaks
by Bryce Woolley, Evan Woolley
Rhyme of the Modern Submariner | Part 1 | Special Edition
This month, we have the honor of presenting the ROV-In-A-Box Kit from !nventivity. ROV stands for Remotely Operated Vehicle, and while this can refer to a tethered vehicle that tackles any sort of terrain, it very often refers to an underwater vehicle, as was the case with this kit. After covering the AUVSI underwater robotics competition in 2006, we knew that there were competitions out there that catered to these aquatic bots, and we thought a competition would be a much more exciting way...

Robotics Resources
by Gordon McComb
Robotics Via Remote Control
The typical amateur robot is completely autonomous; its own circuitry controls what it does and where it goes. That circuitry can be as simple as moving toward a light in the room, or as complex as carefully mapping and navigating the room using vision and other sensors...

BasicBoard Robotics
by William Smith
Moving From BS1 to PIC
A high school teacher recently sent me an email asking for advice on the best path to move from the BASIC Stamp 1 (BS1) module to Microchip PICs. He had his students programming the BS1 Project Board (Figure 1) which is a very nice board for the price. He was happy with that board as an entry point, but the next step in the BASIC Stamp world was moving to the BS2 Homework Board, which is a $45 development board. He hoped to keep it below $25. He thought maybe programming a PIC microcontroller...

Appetizer
by John Sosoka
The Greatest Playground of All
The real world, what a place! The smell of freshly mowed grass, the breeze against my face, textures, colors, shapes. The real world is incredibly compelling to us. Life, from plants to animals to other humans, has an incredible draw for us. We’ve been finely optimized to survive in the real world. Looking at a beautifully rendered apple on a screen is a treat for me, having been a part of the computer graphics community for longer than I care to remember. But holding, touching, and biting...

Then and Now
by Tom Carroll
Robots - How We’ve Built Them Over The Years
We take for granted all the motors, sensors, high power density batteries, and microcontrollers that are contained within today’s experimental robots.

by Tim Wolter
in The Combat Zone

For many builders, combat robotics is about pushing the engineering envelope. You know, how many extra volts can we hammer through the system before it flames out?

In the post-televised robotic combat era, it’s good to see the sport can still draw a standing room only crowd. Such was the case at the Rotunda Rumble held at the Mall of America in Minneapolis, MN, where there were at times four floors of spectators cheering for more.

by Chad New
in The Combat Zone

The power switch is one of the most overlooked yet critical parts of a combat robot. Paraphrasing the Robot Fighting League rule set, all robots must have an easily accessible power switch that can be used to turn on and off the robot safely, quickly, and easily.