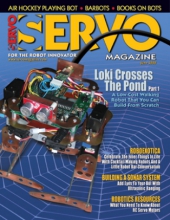 Now in its ninth season, RoboExotica’s goal is to explore the philosophical implications of man-machine interaction through interactive robotics projects, symposia featuring notable speakers from all over the world, and lots and lots and lots of alcohol. RoboExotica is brought to life by the Vienna Bureau of Philosophy and Austrian art groups Shifz and monochrom, whose tireless dedication to this festival and other projects such as Ars Electronica expand the frontiers of the study of ...

I began to entertain the idea of designing and building my own Loki. David’s Loki has what looks like aluminum legs and feet. I couldn’t figure out a simple way to solder or weld the leg and feet parts together. I later found out that the original Loki’s legs were made of painted aircraft-type plywood. Since I prefer working with metal, I hit upon the idea of making the parts out of PCB (printed circuit board) material. Double-sided PCB stock is fairly easy to cut, and easy to soft-solder ...

Designing and Building a Robot from Scratch | Part 4

Next, we chose a frame type and the components along with determining the ideal layout. We completed the design of the robot and learned some tools and techniques that can be useful when building a robot. With all of this done, we can now build the robot! In the next few sections, I have outlined the actual building process of the robot...

I’ve always wanted to do an ultrasonic ranging project. So, guess what we’ll be talking about and building up this month? Ultrasonic ranging is a great way to add eyes to your mechanical animal. I’ll bet you didn’t realize that there is an off-the-shelf ultrasonic ranging product out there that allows you to tune those “electromechanical eyes” to your robot’s environment. If you scan the pages of SERVO carefully, you’ll come across a company called MaxBotix. They produce a line of ultrasonic...

I’m always looking at robotic bases and there isn’t a better source than SERVO Magazine. I’ve also run across many just by surfing around on the Internet. One of my favorite sites to visit is the Junun.org site developed for the Portland Area Robotics Society. I’ve never gone to any of their competitions or been part of their club, but I still like the parts offered at this site. What caught my eye the first time I went there was the Mark III Chassis Kit. For $10, I got all the metal parts...

Robytes
by Jeff Eckert
Robytes | June 2008
Prof. Noel Sharkey is not exactly a silent, plodding evil genius, toiling away somewhere in an obscure lab. In fact, the rather colorful guy appears regularly on TV (about 300 appearances so far) and radio, and in a range of publications. But he is also — among other things — a Professor of AI and Robotics at the University of Sheffield ([url=http://www.sheffield.ac.uk]http://www.sheffield.ac.uk[/url]) and has an impressive string of academic abbreviations after his name. It is therefore worth noting that, in a keynote address to the ...

GeerHead
by David Geer
Kuka Robot Plays Air Hockey
Students from the Department of Technological Studies at Ohio Northern University found a fun, creative way to solve an industrial robotics problem: How can a robot pick parts from a bin if the parts are in motion? Answer: The same way it can play air hockey. Enabling an industrial robot — in this case, the KUKA KR3 — to play air hockey solves some of the same problems faced when trying to make it pick up moving parts. The robot has to identify the moving puck and direct its arm to meet it ...

Robotics Resources
by Gordon McComb
What You Need to Know About Radio Control Servo Motors
Since the early 1990s, servos for radio controlled airplanes and cars have been a preferred method of motorizing a robot. Many of the benefits of servo motors are obvious: They’re small, relatively inexpensive, and for the most part easy to use with most any robotic control system. Radio control (R/C) servos combine a DC motor, gearing, and control electronics in one compact package. Plus, most servos are engineered for convenient mounting. Just a couple of screws and the motor is tightly...

Appetizer
by David Calkins
What the Heck is a Robot, Anyway?
In 1921, Karl Capek wrote the play Rossum’s Universal Robots, thus coining the term “Robot.” (Okay, technically it was his brother Josef who amended Karl’s original term from either the Latin labori, or the Czech trudnik, but we won’t quibble. It was still Karl’s play.) In the play, they were not electro-mechanical humans. They were very much flesh and blood, manufactured in fleshy parts and later assembled. This very much follows the golum and Frankenstein mythos.And it is clearly the basis...

Then and Now
by Tom Carroll
Books On Experimental Robotics
Good reference books on any particular subject are vital for anyone who really wants to know more about the topic, and robotics is no exception. The Internet can give you access to a lot of great information, but a good set of books on robotics is necessary to delve far into this exciting field. I’d like to discuss a history, of sorts, of some of the books that made the greatest impression on me for the past 30 years or so.As you can imagine, my choices for a great series of books on robotics...