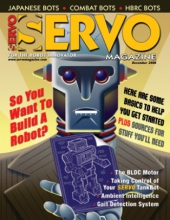 So You Want To Build A Robot?

Getting Control With the Propeller | Part 4 | Propeller Multi-Controller

This month, we wrap up our four part series by covering practical use of PWM on the Propeller using our multi-controller board. In last month’s article, Kevin McCullough covered stepper motor control and made schematics available on the project web page. These schematics use the L293D Quad Half-H Driver IC which provides bi-directional drive currents of up to 600 mA from 4.5V to 36V. We will use the L293D in this article for both motor control and light dimming...

Ever wanted to monitor your rhythm and stride pattern while you run? How about the G-force on your knees on the treadmill? Want to do simple motion tracking (inexpensively)? This article describes a simple but powerful design for a gait detection system (of course, along with all the software you would need!) using the highly configurable Cypress CY29466 microcontroller for control and ADX330 accelerometers for the sensors.

The goal of this article is to offer a comprehensive view of AmI, from the current state-of-the-art to next-gen AmI systems with high-level cognitive capabilities.

Learning To Drive: The BLDC Motor

If you were to go back and survey past SERVO articles that I have written, you would probably conclude that I have this thing about motors and motor drivers. For instance, we recently tackled Universal Motors and constructed a Universal Motor controller. I also presented more than one SERVO stepper motor controller project. In these pages, we’ve driven linear actuators, rotated hobby servo rotors, and built circuitry to oversee the direction and speed of simple brushed DC motors...

This month, I will show you how to build the main base assembly for our two characters. Keep in mind that the dimensions and hole sizes given are based on the RS-64 actuator used on the Megabot and the RS-28 used on the Firebot. You are free to change these actuators, but some of the dimensions and hole locations may need to be changed accordingly. In this series of articles, the final robot is not as important as the journey that we take to get there. Many of you won’t build the exact robots...


Taking Control of Your SERVO Tankbot

As we discussed in the first Tankbot article back in September, the PICAXE servo command generates a continuous pulse-train in the background, suitable for driving the TankBot’s servo motors. The complete syntax of the command is “servo, pin, pulse” where “pin” refers to the PICAXE I/O pin to which the servo is connected and “pulse” is a value between 75 and 225 (in 10 µs units). Theoretically, 150 (1,500 µs or 1.5 ms) is the center value that will cause the servo to stop rotating altogether...

GeerHead
by David Geer
Artificial Muscles
Electroactive Polymer Artificial Muscles (EPAMs) are a new actuating/motion technology based on polymers that react to electricity. The new actuators are useful across applications where motors are not as efficient or are simply not feasible. The basic EPAM is a rubber sheet made of a custom-formulated elastomer, explains Ilya Polyakov, a senior mechanical engineer at Artificial Muscle, Inc., creators of the EPAM. The polymer is applied so that electrodes plate the rubber sheeting on both...

Robotics Resources
by Gordon McComb
So You Want to Build a Robot
In this installment of Robotics Resources, we’ll touch upon several main points of interest you’ll need to be familiar with if you want to plan, construct, and operate your first robot. Of course, space limitations mean we can’t provide in-depth coverage of everything in this one column. To further your study of the robotics arts, you are advised to check out back issues of this magazine and Nuts & Volts, both of which are available in convenient CD-ROM electronic format.

Then and Now
by Tom Carroll
Japanese Robotics
I have a book on the robotics bookshelf in my office entitled Inside the Robot Kingdom by Frederik L. Schodt. With a subtitle of “Japan, Mechatronics, and the Coming Robotopia,” Joe Engelberger, the father of the industrial robot, commented about the book on the back cover: “Western industrialists will learn more about competing with Japan from this book than from all the how-to books that have proliferated since Japan, Inc., became a popular ogre.” The amazing thing is this book was...

The wedge is one of the oldest and most successful types of combat robots. The effectiveness of a simple ramp with good drive power has yet to be matched by any other robot design.


Laying Out Your Work Area

When it comes to entering combat or otherwise known robotics the easiest thing a builder can do to help themselves get prepared is to work out their layout.

by Rob Farrow
in The Combat Zone

It was the fifth Robothon event for Western Allied Robotics at the heavily trafficked Seattle Center’s Center House. Large crowds circulating throughout the day were entertained by three and 12 pound fighting robots.

Robotic combat is a dangerous sport in its very nature, and if participating, one must accept the safety risks that are all too often present in the sport.