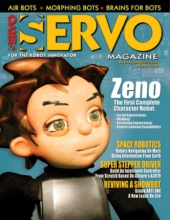 Since 2000, the NASA Mars Exploration Rover mission (MER) has been the main objective of hundreds of scientists and engineers; their life being completely dedicated to the mission for years...


C Programming for Microcontrollers Made Easy

New, no-cost online system cuts start-up time from hours to minutes. | Many aspiring roboticists take their first steps in programming embedded controllers with interpreted languages, such as LOGO and Basic. These languages are fine entry points for beginners, but after a short time, their limitations can become frustrating. To tackle more sophisticated projects, sooner or later you will have to move up to writing code for microcontrollers in C...

One cool aspect of the robotics hobby is that there are so many different areas to explore. This keeps it really interesting! Recently, I was fortunate enough to pick up an old promotional showbot which made a nice addition to my robot collection. The robot itself seemed to be in pretty good shape overall. However, it was missing all the extras like the remote control unit, wireless headset communicator and, of course, there were no docs ...

I love writting for SERVO. Why? ... Because I get to put together all kinds of neat stuff. And, when I’m done playing with my new garage-brewed toys, I get to show them to you and tell you all about them. So, get your soldering irons hot and stuff your face into that illuminated desktop magnifier. We are going to build an intelligent stepper motor controller from scratch that is based on the Allegro MicroSystems A3979. ...

My particular application — as we discuss here — is in filtering input data used to calibrate the odometer in a road rally computer. After computing a best-fit line using a linear regression on a set of data points, square roots are needed to compute the distance of each data point from the line. If a data point is too far off the line, it is discarded on the assumption of human error and the line is recalculated. Square Root on a PIC in the November ‘06 issue of Nuts & Volts ...

I closed out last month's article by showing you how to connect the GPSLoggerOut program on your PC to a microcontroller. Let's take a closer look at the interface needed for each of the GPS modules we have covered in this series...

Robytes
by Jeff Eckert
Robytes | January 2008 | Goodbye E-Harmony, Hello Bot-Harmony
You may have noticed (or tried not to notice) that some robots are becoming a lot more lifelike and even alluring. One example is Dion, a Chinese babe who is said to mimic all sorts of human features, including facial expressions, skin temperature and elasticity, breath, and heartbeat. According to the manufacturer, she can even be built to resemble the specific person of your choice. Another deliberately seductive mechanism is Actroid DER2, developed at the University of Osaka and ...

GeerHead
by David Geer
Zeno - The Fist Complete Character Robot
Human interaction is its main attraction ... Zeno — due on the market as a toy in 2009 — is the closest thing to human that a robot has become. Its facial expressions are a story all to themselves, enabling the most complete robot personality and human-to-robot emotive interactivity to date. Want some proof? Read on! Zeno is a 16-inch, six-pound, interactive robot boy developed by Hanson Robotics with help from a number of vendors including RoboGarage and roboticist Tomotaka Takahashi ...

Twin Tweaks
by Bryce Woolley, Evan Woolley
More Than Meets the Eye | The Mighty Morphing V-Bot
Last time, we had the honor to present two robots — the Roboquad and Robopanda — that approached the line between toy and robot from the robot side of the equation. This month, the V-Bot shows that a toy can also approach that fine line between electronic plaything and seemingly sentient automaton.

Different Bits
by Heather Dewey-Hagborg
Neural Networks For The PIC Microcontroller | Part 4 | Self-Organizing Maps
Imagine if your robot could learn to characterize its sensations. Could it evolve its own language to describe its “feelings?” They might be literal sensations derived from sensors rather than self-reflection, but it is still a provocative idea ...

Robotics Resources
by Gordon McComb
Small Brains for Your Bot
As a child, I imagined robots being governed by tubes and relays — not an unusual image given the science fiction movies of the time, like Robbie the Robot in Forbidden Planet. Today, fictional robots are depicted with miniature microelectronic brains, with “emotion chips” the size of a fingertip. And no wonder, because these things actually exist! Far from science fiction, with today’s technology you can build a robot with a brain no larger than a caterpillar. What’s more, these brains are ...

Appetizer
by Gerard Fonte
Terms of Endearment
What those familar tearms really mean.

Then and Now
by Tom Carroll
Robots Take To The Air
Back in December ’05, I wrote about robots that go to war. These were about robots that are on the ground, remotely operated from a distance. In my research, I have found so many acronyms that are tied to these types of robotic vehicles. ROV for ‘remotely-operated vehicle’ which is often tied to the underwater variety, though it has been used to describe any remotely-operated land, sea, or even aerial vehicle. AGV for ‘automated guided vehicle’ which often describes the automated vehicles ...

Mind / Iron | January 2008 | Infrastructure
by Bryan Bergeron
A fundamental aspect of robotics is that the application domain can range from ocean beds and table tops to the nooks and crannies of extraterrestrial dunes. It’s no coincidence that the techniques and technologies described in the article featured in this issue of SERVO can be applied to virtually any application areas. However, if you have a particular interest in space exploration, then you’ll find Fulvio Mastrogiovanni’s article, “Space Robotics,” of particular note...