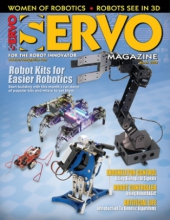 A viable power-assist exoskeleton robot — sometimes called a power suit, man amplifier, or man magnifier — is something that many people in industry, military, and medicine, have been anxiously waiting for.

Last month, you read about how I started re-using some leftover robotics components to revive an old Androbot BOB robot chassis. I focused on what was needed to control the drive motors in the BOB base. I also covered upgrades to an old Handy Board controller to make it more suitable for use on a larger robot and enhancements to the board to make it more reliable. Since the only thing I had to start with was the empty robot shell and drive motors, this entire project is covering the rest of ...

Now that I have a Minebea 29SM-K series 1.8°-per-step stepper motor shaft spinning back and forth on the bench, I figured it might be a good time to sit down and tell you how I persuaded an STMicroelectronics L6208PD to push current through the Minebea’s stepper motor coils. Unfortunately, I can’t provide a visual play-by-play of my Minebea’s alternately spinning motor shaft. However, I can give you a description of the hardware and software stuff you will need to make your motor spin under ...

Today’s hobbyists can purchase robotic platforms with a wide variety of electronic sensors, mechanical actuators, and programmable microcontrollers. This means that constructing a powerful robot is within the capacity of almost everyone, even those with a minimal background in electronics. This availability of hardware is progressively forcing robot enthusiasts to change their focus from building robots to programming robots. As this emphasis on software grows, the number of people interested...

Designing and Building a Robot from Scratch | Part 1

When you are creating a custom robot, there is no manual, instructions, or tech support. You start with a blank slate, with thousands of options available to you. You have to ask yourself and answer questions like “How big will it be? What will power it? What materials will I use for the frame?” and many more. With an unstructured approach, this can seem like an impossible task. However, if you approach the problem with a plan, breaking down the problem into chunks, it is not as difficult as...

Robytes
by Jeff Eckert
Robytes | March 2008 | Climbing the Walls
In the common tradition of borrowing robotic concepts from nature is Waalbot, which needs no magnets or vacuum devices to attach itself to vertical planes. Like a common gecko, this Carnegie Mellon ([url=http://www.cmu.edu]http://www.cmu.edu[/url]) invention uses tiny fibers on its feet to adhere to just about any surface. The little guy isn’t much bigger than a quarter, but he sports two sets of three-footed wheels, each with its own motor. The spring-loaded tail keeps the critter pushing against the wall’s surface ...

GeerHead
by David Geer
Pace Robotics Labs | Activevision Robot Technology Captures Sights in 3D
Pace University Labs produced the “activevision” technology (per a Pace University academic paper) in conjunction with research into a much larger robot cognition project. With activevision, the robot models itself and its environment in a 3D world using graphics rendering engine technology from Ogre3D, just like that used in gaming software. The robot sees the world around it, then assembles it in 3D. It saves and works within that reservoir of graphical data in order to develop changing ...

Twin Tweaks
by Bryce Woolley, Evan Woolley
Back to Basics
As a mechanical engineering student, Evan has been learning about things like how Bessel functions are the eigenfunctions of the Sturm-Liouville Equations that can be used to describe heat conduction in nonrectangular geometries, and how computational methods like the Newton-Raphson method can be used to find the solution to large nonlinear systems. Such highbrow concepts in engineering — however interesting they might sound — can only be mastered with a firm grasp on the fundamentals of ...

Different Bits
by Heather Dewey-Hagborg
Artificial Life | Part 1 | Introduction to Genetic Algorithms
Have you ever questioned the meaning of “life?” I’m not talking about existentialism here, but the meaning of the word — life — what it means to be alive? Have you ever wondered, for example, if there was some way, some possibility, that an electronic creation (your electronic creation) could one day be deemed alive?

Robotics Resources
by Gordon McComb
Robot Kits For Easier Robotics
I vividly remember the excitement of building my first electronics kit. Okay, so the kit was an old surplus reject that used vacuum tubes instead of transistors. But to an 11-year-old interested in the science of electronics, all that mattered was the scores of tiny parts packed into individual numbered plastic baggies, and the smell of smoldering solder as I methodically attached one wire to the next. The thing didn’t work when I first turned it on — in fact, sparks flew and it tripped ...

Appetizer
by Allison F. Walton, Filomena Serpa
When Art and Servos Mix
When we were at FLOAT — the Floatation Center and Art Gallery — we started thinking about what we should pick for our December art show, robots as art came to us in an instant. Why not fill our gallery with DIY Bay Area robotic art? Hell, everyone loves robots, don’t they? And isn’t it the next brick and mortar Internet, the job of the future? Who knew how much work we were going to be taking on ... I guess we should be careful what we ask ...

Then and Now
by Tom Carroll
Then and Now | March 2008
I was talking with my wife, Sue, about Women’s History month and she asked if an article on Women of Robotics would be an appropriate subject for my column. She knew that I had worked with various women in my robotics work over the years. After all, in September of last year I had written about Bala Krishnamurthy in “People of Robotics.” She has been in the field of robotics for over 25 years and designed and developed programming languages for Unimate’s robots, among many other things ...