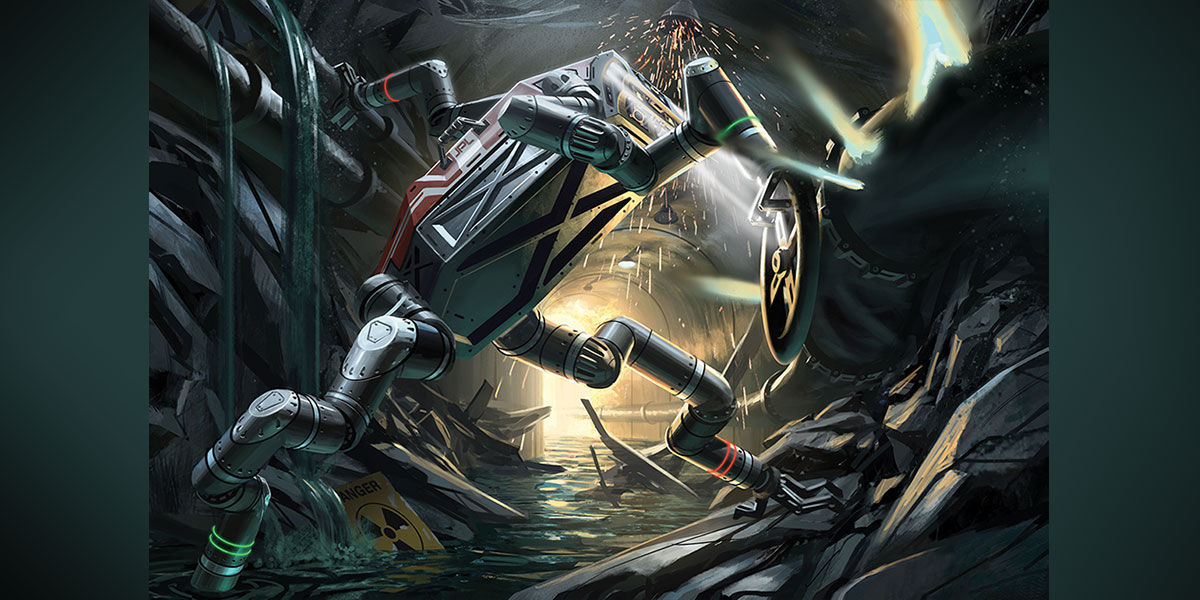 With four arm/legs that walk, grasp, and bend every which way, with seven joints per limb, the RoboSimian is the robotic equivalent of a vaudeville contortionist. 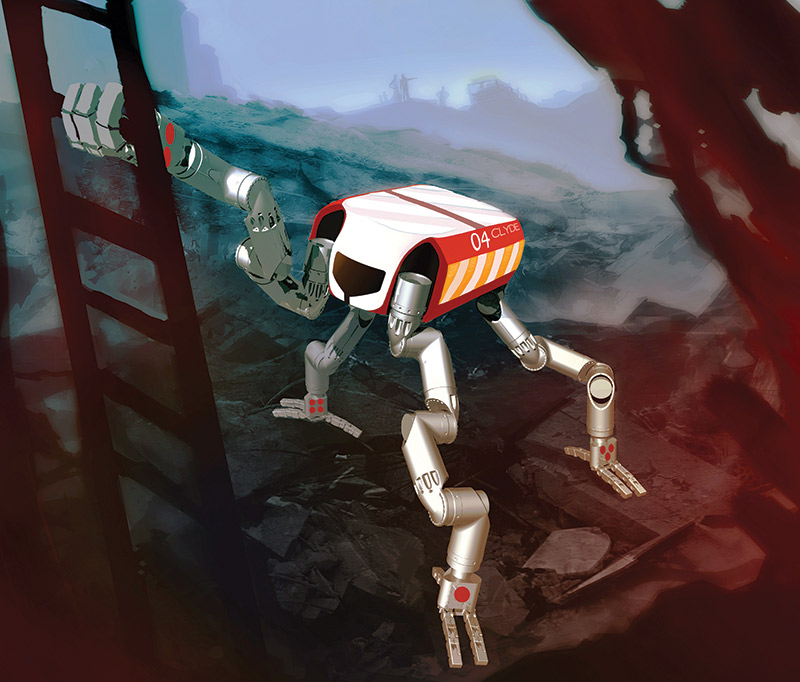 Smart but Not AI

RoboSimian is an ape-like quadruped robot that can walk or grasp using end-effectors with all four limbs. One of the robots targeted to the famed DARPA challenge, RoboSimian — like its close cousin, Surrogate — takes a decidedly unconventional approach to considering its next move and taking action.

"We don't use AI," said Brett Kennedy, Supervisor, Robotic Vehicles and Manipulators Group, NASA JPL. Robots with AI systems learn from their mistakes as they think and act, recalculating as they work through time and space. Unlike the recalculating GPS devices in those crazy commercials that send their drivers crashing when turning where a street should be but isn't, RoboSimian cannot afford to make any mistakes to learn from. 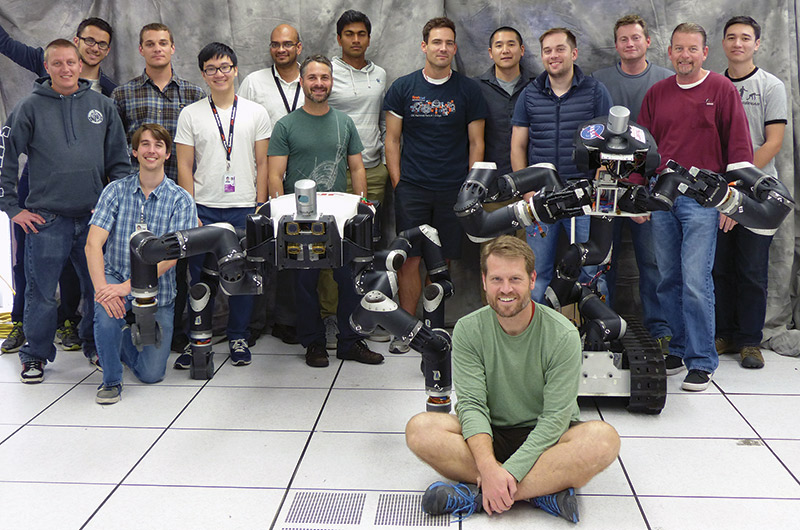 The JPL team behind RoboSimian and Surrogate.

Instead, RoboSimian's software works deterministically such that its creators and operators know what the exact output will be for any given input, commented Kennedy. The RoboSimian approach to command and control leverages a tightly-coupled relationship between a human operator and what Kennedy calls “Supervised Autonomy” in which the operator forwards or communicates a certain intent of what the robot should do, and then using what Kennedy calls fancy math, RoboSimian determines its best plan for executing and carrying out that intent.

"When we want RoboSimian to turn a valve, for example," said Kennedy, "the operator indicates the valve in the scene and says ‘turn this thing,’ and then the robot figures out how to move to grasp and turn the valve."

This enables the robot to be deliberate and stable, such that it should not make any mistakes that would otherwise happen based on what it does not yet know. "The RoboSimian has three points of contact at all times; three legs with a center of gravity inside that triangle that the three joints make," explained Kennedy.

Due to the robotics and programming that make the three-legged stance possible, there is no calculable scenario; no dynamics where the robot could or would topple. "That is the deliberate aspect of the design. It could stop moving at any time and sit there indefinitely if it is confused or whatever," Kennedy said.

Using the three-legged stance, RoboSimian has a single limb remaining free that can operate as an arm and grasping end-effector.

Kennedy and his colleagues write the RoboSimian software in the popular C programming language. It is nearly all custom written code in C, according to Kennedy. All the commands are based in achieving intent by using any of a number of established programmed robotic behaviors.

"Those might be, walk from point A to point B, or turn the valve. The DARPA Challenge dictates all the behaviors and tasks the robot must have the capacity to perform," stated Kennedy. Supportive behaviors include sitting, grasping, turning, and many others.

The communications protocol between the robot and the human controller is Wi-Fi.

Deliberate and Stable vs. Dynamic and Reactive

The deliberate and stable approach to RoboSimian has advantages over the more obvious dynamic and reactive approach that other roboticists use. Operating with the given that in the DARPA Challenge, human operators will have to pause robotic movements and applications while they consider their next move, Kennedy and colleagues knew there will be times when the robot will need to simply stop moving and hold its position for indefinite periods of time. "You don't want the robot burning power or getting in trouble in those intervals. And you don't want the robot making mistakes," Kennedy said.

Another important reason for taking the deliberate and stable path is that it is much more difficult to figure out what went wrong with learning algorithms than with the kinds of software and algorithms that RoboSimian uses. "If RoboSimian does do something that is bad, we will figure out exactly what the robot was thinking at that point, and see what comes out the other end, and why that was not what we wanted. The retrieval of state is what you want here," commented Kennedy. The deliberate and stable approach of RoboSimian is similar to what the Mars rovers applied, and that is why NASA could diagnose issues so well with the Rovers so far away on Mars, according to Kennedy.

A deliberate and stable robot equipped with multi-jointed limbs makes for broad capabilities. "Every limb is designed for manipulation and mobility, and they are all identical — each with seven joints," said Kennedy. The seven joints enable seven independent rotations which end up being and accomplishing the same things that a human arm can do, though they are set up differently. "RoboSimian has the same number of rotations, but these are distributed along the limb in the joints," Kennedy explained.

The RoboSimian's joints use brushless motors with brakes and encoders, including output encoders to sense the angle of the joint. The motors drive harmonic drives that are typical in robotics applications. "These drive trains are deployed with cartridges such that if an actuator fails, we can slide it out and replace it with another, and screw that in," stated Kennedy.

An important part of the technology is the fact that the limbs and joints are very generalized, so operators who find different ways to use the robot to do things can count on the ability for the robot to fulfill those expectations without changing the hardware. "For example, last year we had added a mode where the robot can sit down, and we can use the upper limbs to do manipulation. This also freed up the lower limbs to do a forklift mode where we slide the lower limbs into something and pull it out like they would using a forklift," said Kennedy. So, the generalization of the hardware capabilities enables the human operators to innovate.

Since RoboSimian is still in its early design phases, its creators have not fully exercised every capability the robot has, such as passively stable stances, multipoint anchored connections, and bracing itself during forceful manipulation operations.

"The idea of the multipoint anchor connections is that in 3D, we can apply the end-effectors such as in a ladder climbing scenario," Kennedy commented. In this scenario, RoboSimian's hands and feet can grab the ladder rungs at at least three points with three end-effectors at any one time and maintain stability.

Further, if the ladder tips over and is suddenly like a set of monkey bars, the robot would be insensitive to the fact that the ladder is at another angle. "It would simply go into a sort of monkey/sloth mode," said Kennedy. If the robot should try to open a door that is stuck shut, it could use one lower limb to brace itself while using two upper limbs to open the door if necessary.

RoboSimian is enabled with heading agnostic perception, which enables the robot to change direction without first reorienting itself. "By design, because each limb is the same and has multiple cameras, there is nothing different in terms of functionality based on heading," explained Kennedy.

There really is no front or back to the robot, so it does not have to move in a certain direction based on what it is or is not facing at the moment it changes direction. This enables the robot to change direction in fewer steps and movements. "The fewer the steps, the less the risk," smiled Kennedy.

The robot's axisymmetric distribution of the limb workspace and visual perception enable the robot with this heading agnostic perception. Because the four limbs are basically on a square with sufficient cameras all around to fill in each hemisphere of visible space with stereo data (two camera eyes in each case like a human being, but with more sets of them), and because the cameras build a 3D model of the world around the robot in every direction, any set of cameras can point to the direction the robot wants to take next. "That's why the robot doesn't have to reorient itself first before moving in a new direction," Kennedy commented. 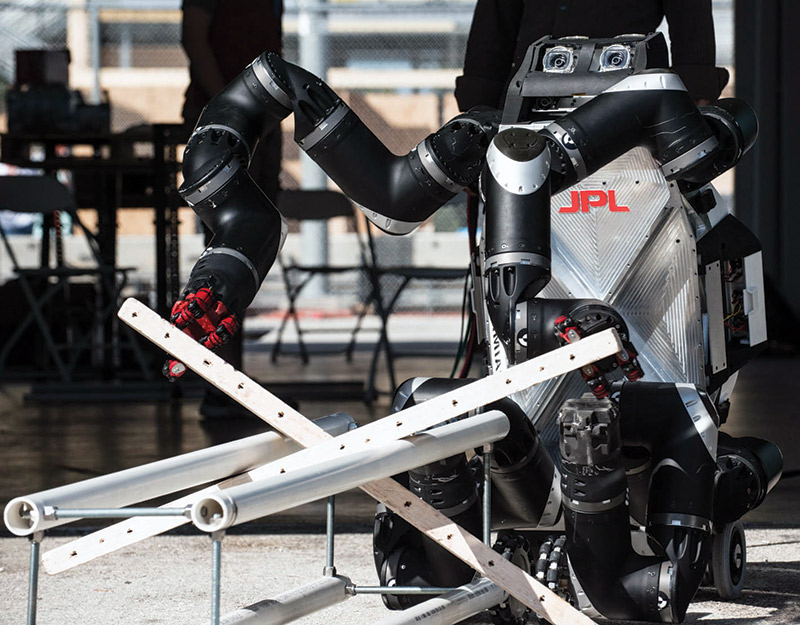 While RoboSimian is great at generalized tasks, it is slow in benign movement tasks such as just walking across a long stretch of terrain. So, comes the Surrogate version of RoboSimian. "We gave it wheel accessories so it can roll. Wheels make sense for certain operational conditions," explained Kennedy.

While there are lots of tracked vehicles with robotic arms, Surrogate uses what was one of RoboSimian's arms as its spine. "The seven jointed spine allows us to position the Surrogate's upper body in any place or orientation in reach of the spine," said Kennedy. There are two more limbs on top of that spine that are not as generalized as the ones on RoboSimian. "They are more like arms and are more robust on the Surrogate," commented Kennedy.

The Surrogate also has a head and neck with two cameras on the head, which operators can point at whatever they are trying to work with. "It is more straight forward as a bi-manual robot with two limbs like a human being would use," concluded Kennedy.  SV

Note - On June 14, 2016, Robosimian's lithium-ion battery exploded while alone in the lab.