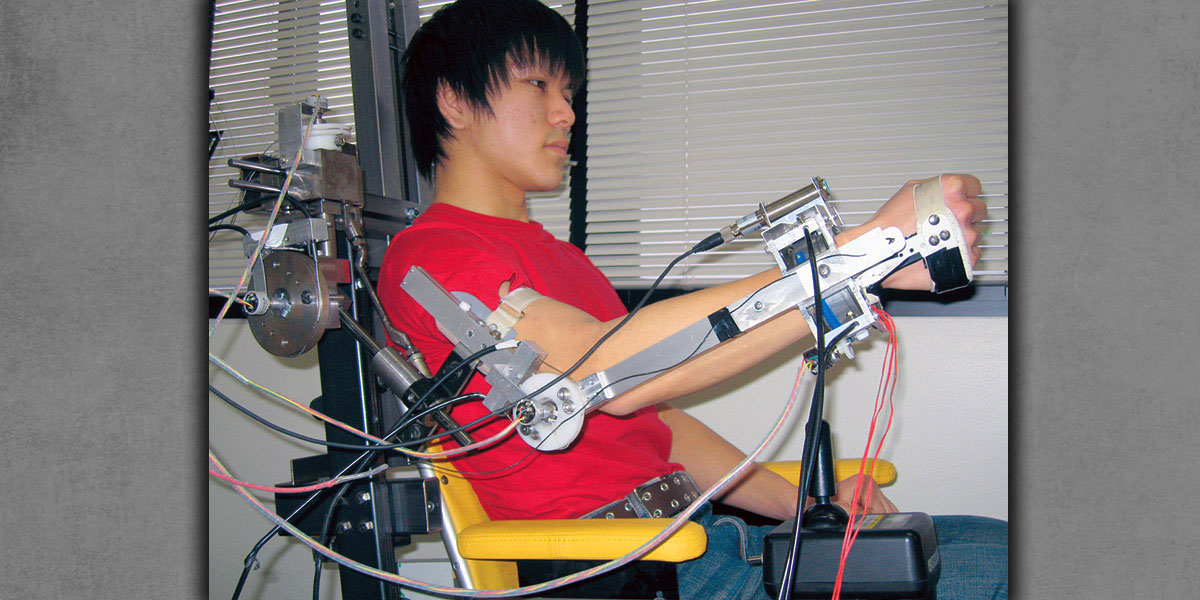 It is important that a power-assist exoskeleton robot automatically assists the user’s motion according to that motion intention in real time. Electromyographic (EMG) signals — which are generated when muscles are activated — are one of the most important biological signals to determine the user’s motion. The amount of the EMG signal indicates the muscle activity level (i.e., the amount of generating force) and it can be easily measured using simple electrodes. 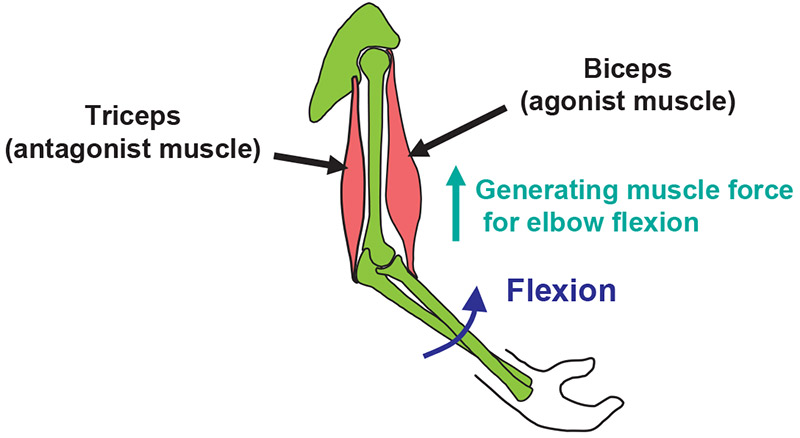 Therefore, it can be used to activate the power-assist exoskeleton robot automatically, since it directly reflects the intention of the user. Consequently, human motion can be estimated if the amount of muscle force of certain muscles is estimated. If the user’s motion is estimated in real-time, the motion can be easily assisted by the exoskeleton. The EMG-based control is not very easy to be realized, however, because of several reasons.

The Geometry of Power-Assist

Therefore, the hardware design is harder to come up with than that of ordinary robots. Development of small-size, light-weight, and high-power actuators such as artificial muscles are required to be practically wearable for daily living. 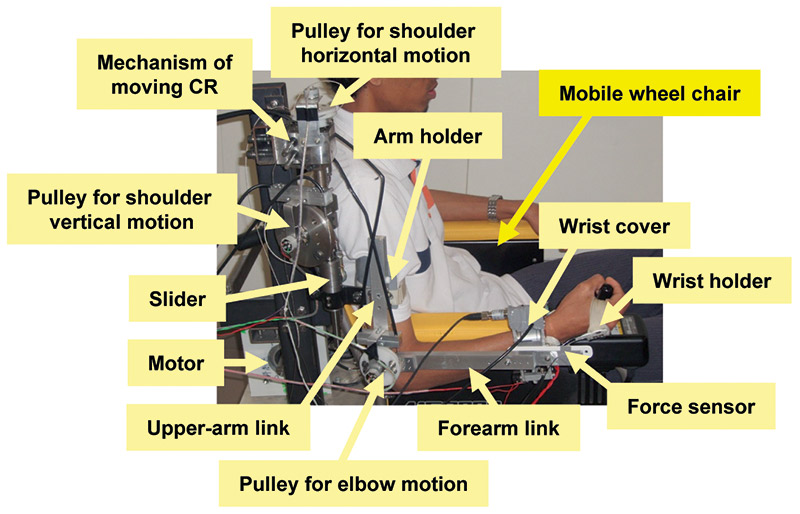 The shoulder motion support part is composed of an upper arm link, driver and driven pulleys (one for shoulder horizontal flexion/extension motion, another one for shoulder vertical flexion/extension motion), two DC motors, two potentiometers, an arm holder, and the mechanism for the center of rotation (CR) of the shoulder joint. The 1 DOF elbow motion part consists of a forearm link, pulleys, a DC motor, and a potentiometer. The forearm motion support consists of a wrist frame, an inner and outer wrist holder, a wrist cover, a wrist force sensor, and potentiometers.

Considering the minimal amount of motion required in everyday life and the safety of the user, shoulder motion of the 4 DOF exoskeleton is limited to 0° in extension and adduction, 90° in flexion, and 90° in abduction. Limitation of the forearm motion is 50° in pronation and 80° in supination, and 120° in flexion and 0° in extension for the elbow motion.

In order to activate the exoskeleton in accordance with the user’s intended motion, the EMG-based control can be applied as explained next. In order to control the 4 DOF upper-limb motion, 12 kinds of EMG signals should be used, as shown in Figure 3. 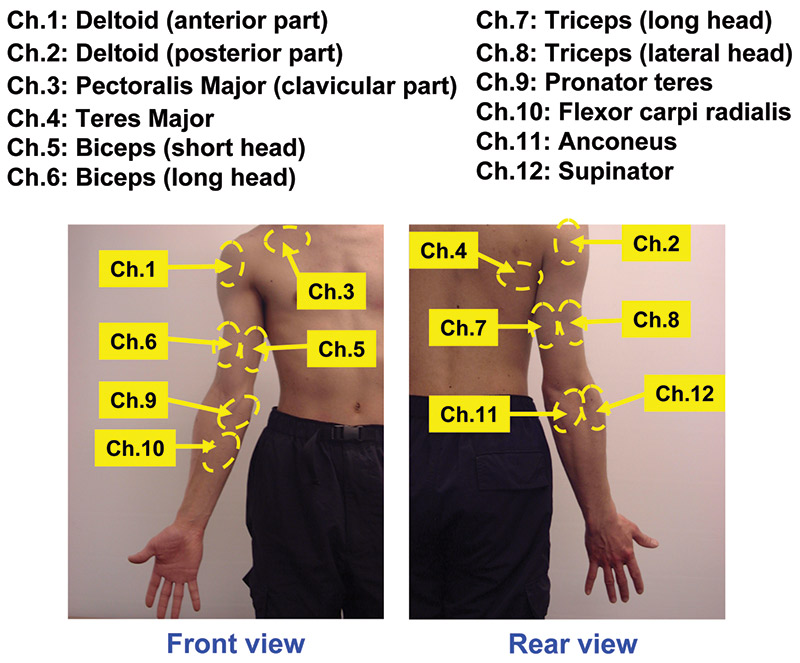 In order to assist the motion of the user, the exoskeleton robot must determine the generating motion in realtime. The user’s motion can be estimated in real time by monitoring the EMG signals of the certain muscles. Since the amount of EMG signal indicates the activity level of the muscles, the amount of generating force by the user can be estimated by monitoring these signals.

However, this EMG-based controller is not very easy to be realized, because:

There are basically two kinds of methods to carry out power-assistance based on the user’s EMG signals. One way is a fuzzy-neuro control method (the combination of flexible fuzzy control and an adaptive neural network) [1]-[4] and the other is a muscle-model based control method.

In the first method, the user’s motion is estimated based on the EMG activation patterns of the related muscles, and then the power-assist is performed to accomplish the estimated motion. The fuzzy IF-THEN rules are designed based on the relationship between the human motion and the EMG activation patterns of the related muscles. The designed fuzzy IF-THEN rules are transferred into the form of neural networks so they can adapt to an arbitrary user. As the number of assisting DOF is increased, the required fuzzy IF-THEN rules become more complicated to cope with this.

A fuzzy-neural network can be applied to modify the muscle-model in real time according to the posture of the arbitrary user. The control system for the power-assist exoskeleton robot for 5 DOF upper-limb motion (i.e., shoulder flexion/extension, shoulder adduction/abduction, shoulder internal/external rotation, elbow flexion/extension, and forearm pronation/supination) is shown in Figure 4. 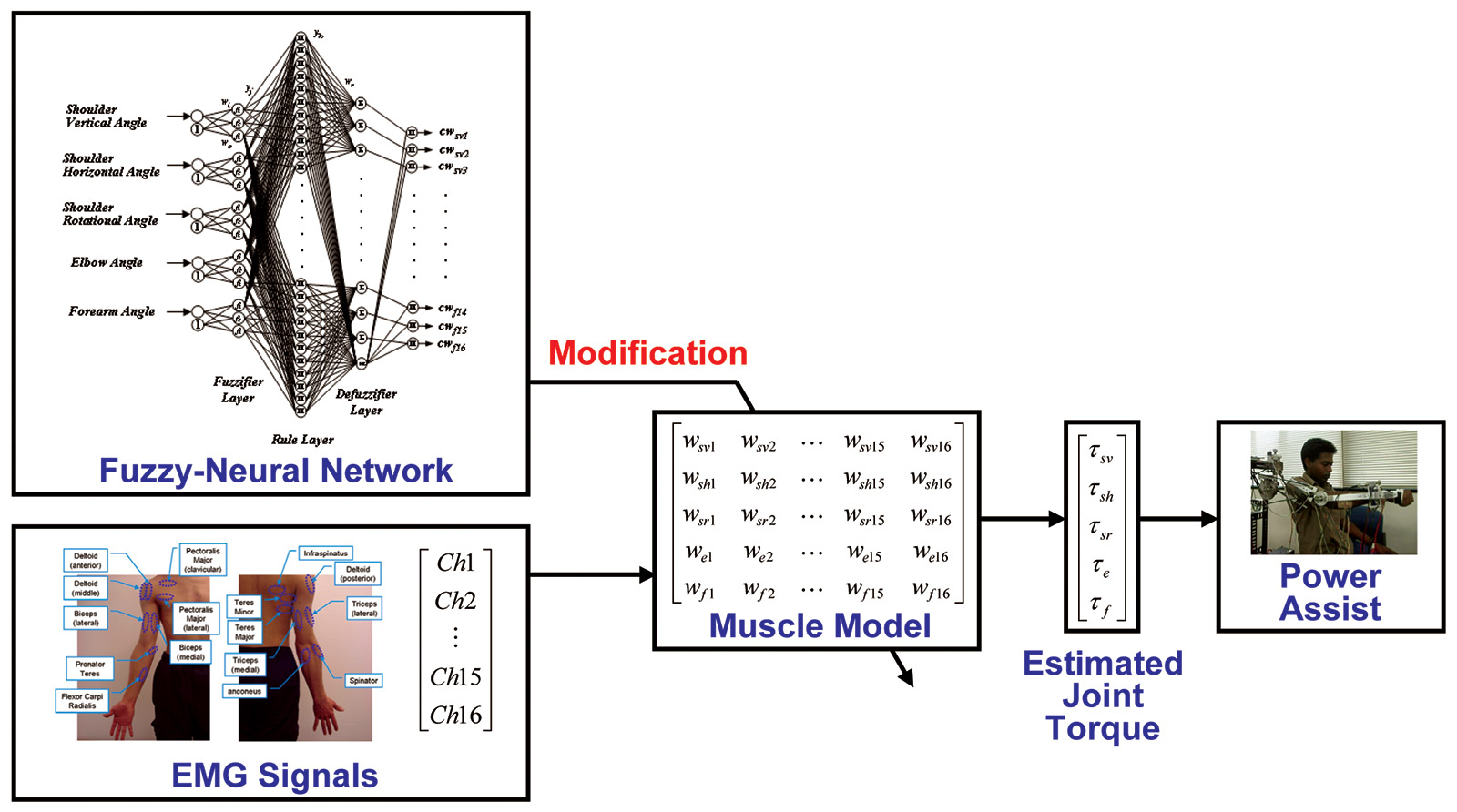 The relationship between the EMG signals and the generated joint torques are written as the following equation if the posture of the user’s upper-limb does not change.

In one experiment, random upper-limb motion is performed by five healthy, elderly male persons (all of them are 65 years or older), and the estimation error of the generated upper-limb motion is evaluated. The motion of each subject is measured by a 3D motion capture system (Hawk Digital System and a high-speed camera from NAC Image Technology, Inc.). In order to capture the 3D motion, 17 markers are put on each subject in the experiment as shown in Figure 5. The motion of the subject is monitored with eight cameras. Each joint torque generated by each subject during the experiment is estimated from the motion results calculated using human models [5]. 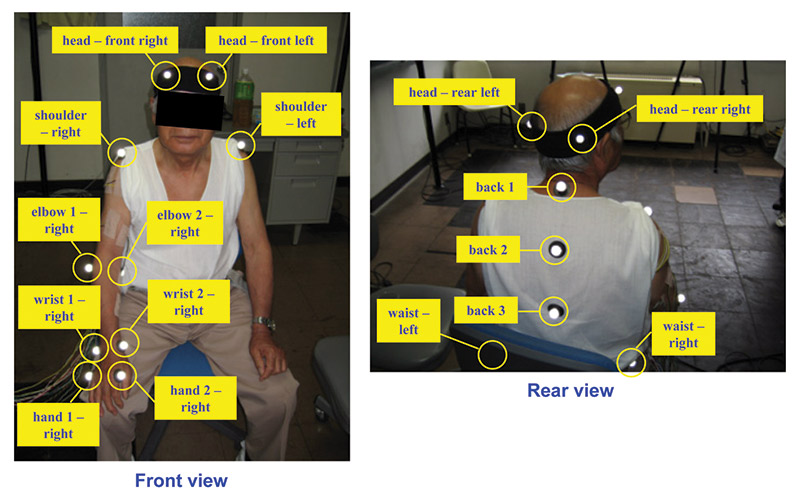 FIGURE 5. Location of markers in the experiment.

The experimental results of the torque generated by subject A are shown in Figure 6 as an example. 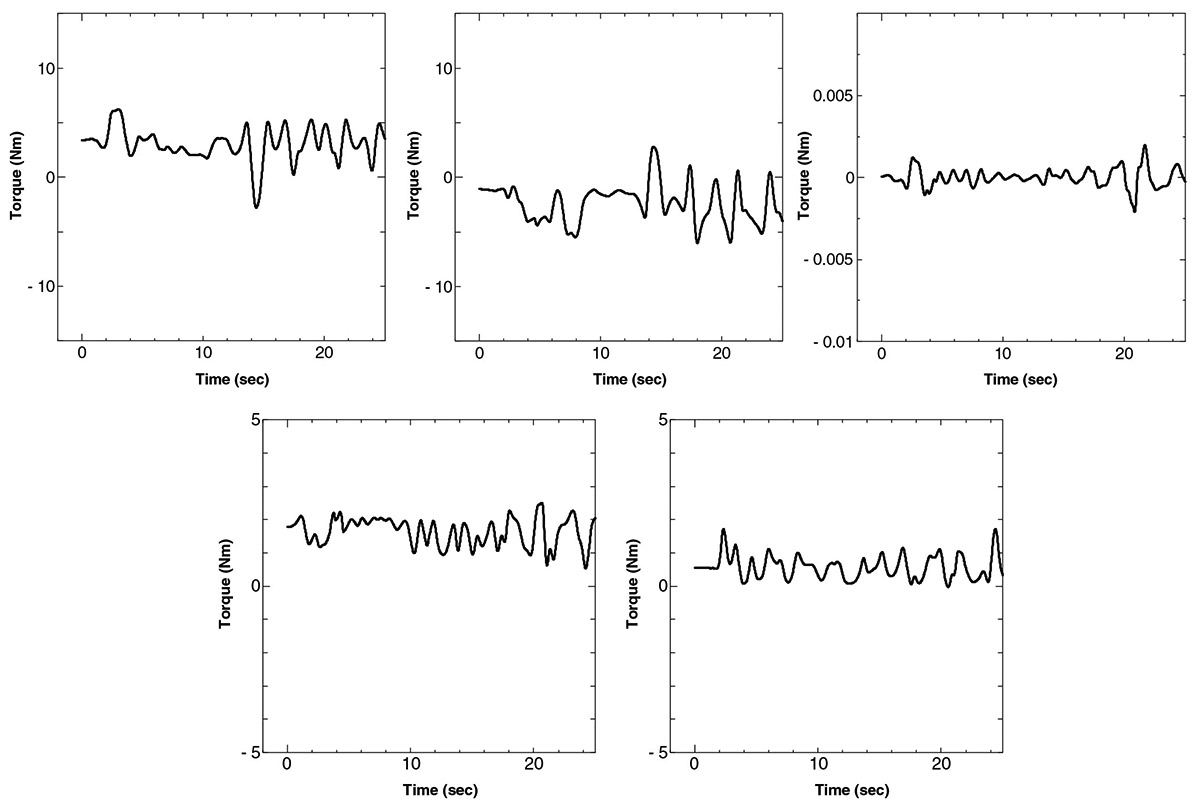 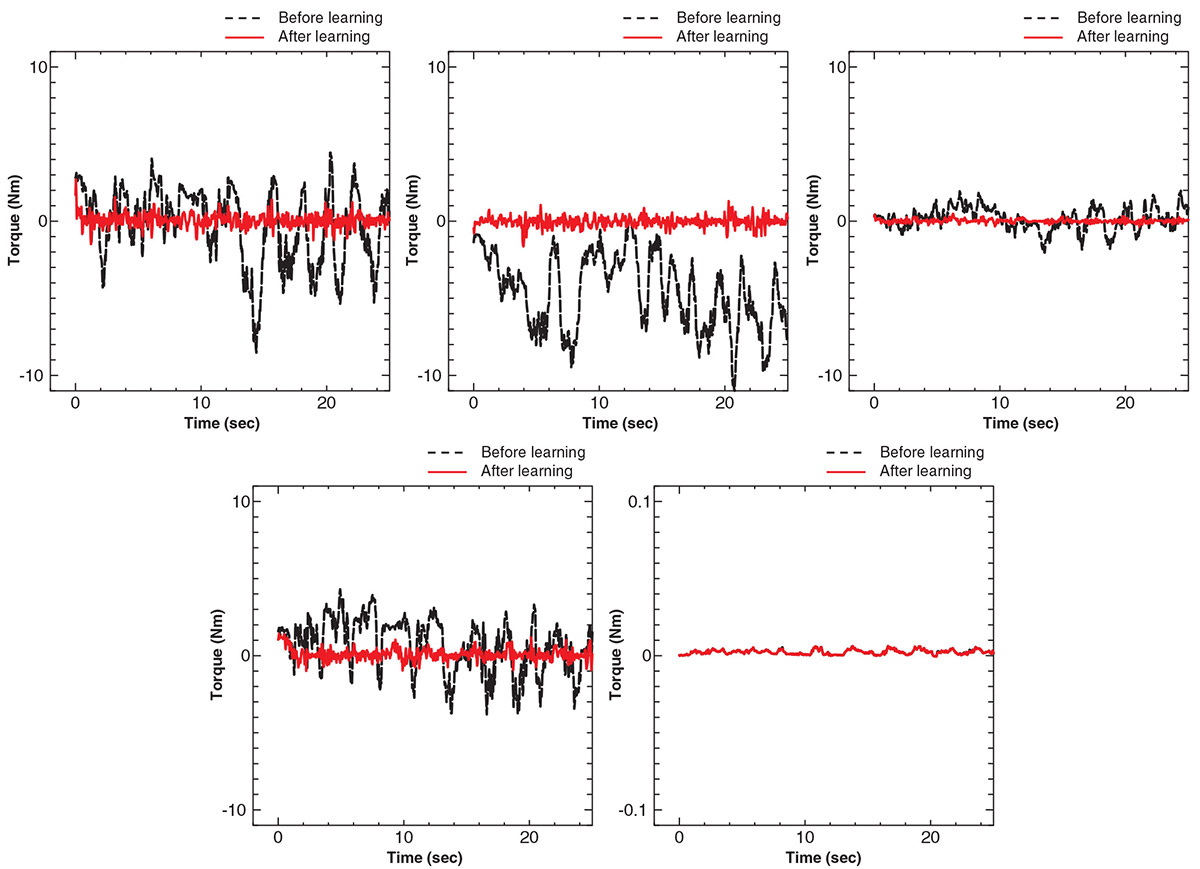 These results show that the user’s joint torque can be estimated and a certain percentage of the estimated torque would be assisted by the exoskeleton robot in real time. Thus, the power-assist is realized with the proposed EMG-based control method.

Recent progress of robotics technology has brought several exoskeleton robots onto the market. However, they are still not ready for daily consumer use. More advanced soft computing technologies need to be developed to make the power-assist robots more intelligent and flexible.  SV