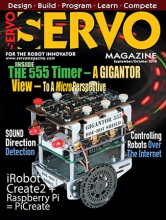 Unified Robotics: Bringing Everyone Together

Bring STEM to the Special Olympics.

See how easy it really is to hack a Roomba.

Build a functioning robot with ROS that knows how to follow humans.


The Biggest and Smallest 555 You’ll Ever See!

An up-close and personal look at the ubiquitous 555.


Controlling Robots Over the Internet

Controlling a robot from a remote location is easier than you think.

Sound direction detection for robots. How difficult could it be?

The Combat Zone
by Sarah Malyan
When a Community Comes Together
The birth of Bugglebots in the U.K.

Twin Tweaks
by Bryce Woolley, Evan Woolley
Putting BattleBots in Double Jeopardy
The evolution of the punkin chunker to a BattleBot’s contender.

Then and Now
by Tom Carroll
A Robot in Every Home
The state of things with capable home robots.

April is 11 years old and has been designing and building heavyweight fighting robots for two years.


Meeting your Heroes. Then fighting them to the death.


When a Community Comes Together

by Sarah Malyan
in The Combat Zone

The birth of Bugglebots in the U.K.

UFOs, Government Secrets, and the Unknown Laws of Physics
by Bryan Bergeron
Regardless of whether you believe in UFOs and regardless of whether they exist, I think it’s a useful exercise to envision a future and then work backwards to where we are today.

Improve Your Workflow with These Five Bots
by Donna Howard
Using chatbots to become more productive at work.