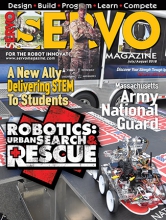 Meet Salto: The “most vertically agile” robot, capable of jumping better than humans.

Details on how a fixed mount laser alignment scheme works and can be easily implemented.

The Robotics: Urban Search & Rescue (USAR) competition is a SkillsUSA event for high school and postsecondary teams that the Army National Guard is helping to bring to schools.

Then and Now
by Tom Carroll
The Biggest Challenges in Robotics
According to a recent survey, these 10 areas represent the biggest challenges for roboticists.

Robytes
by Jeff Eckert, Jenn Eckert
Stimulating Robot Tidbits (07.2018)
Stimulating tidbits on the latest happenings in robotics for consumers, universities, professionals, and everything else in between.

by Charles Dubicki
in The Combat Zone

by Akhil Padmanabha
in The Combat Zone

A Robotics Infrastructure for the Experimenter: Hardware Accessories
by Bryan Bergeron in Mind / Iron
What you need hardware-wise when you’re setting up a robotics lab.