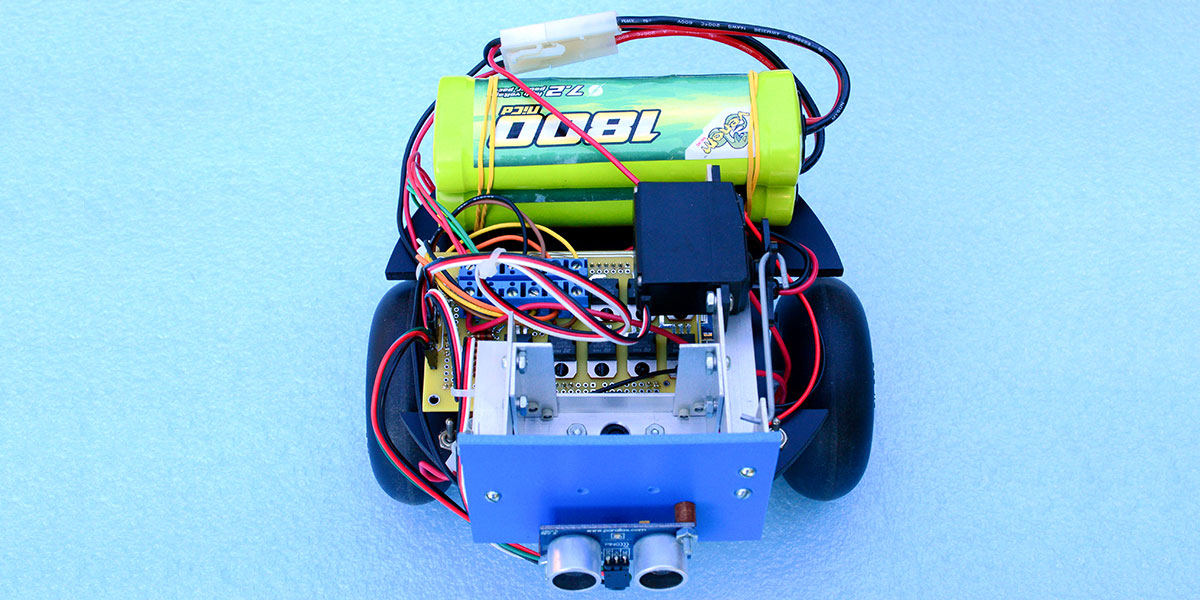 A few years back, I became interested in attempting to propel a wheeled robot using stepper motors. This is not the usual method for propelling a robot. A more typical approach is to use two traditional DC motors. Individual differences in the two DC motors are then accommodated by optical feedback that provides data which can be used to match the speed of the two motors.

The characteristics of stepper motors that appealed to me were their ability to precisely turn a wheel at a calculated distance and their ability to brake. Stepper motors are not a panacea for robot propulsion. They are heavier, use more power, and have far less torque than traditional DC motors. In addition, they cannot be operated at great rotational speeds and the faster they run, the less torque they have. One needs to be careful in selecting a stepping motor. It has to have enough holding torque for robot propulsion. In general, you will find the weight and size of a stepper motor needed to drive a given size robot larger than traditional DC motors.

Stepping motors are a very different animal compared to traditional DC motors. A good overview of stepper motors can be found at http://en.wikipedia.org/wiki/Stepper_motor. In addition, I noticed several universities are using an early copy of a Thomson/Airpax catalog which contains a very good review of stepping motors. A couple of URLs for this are www.ece.mtu.edu/labs/EElabs/EE2304/EE2304_website_2008/Stepper%20Motor%20Resources/Airpax_Catalog_Idx.pdf and www.ece.ualberta.ca/~ee401/parts/data/AirpaxCatalog.pdf. There is also a brief version at www.mpja.com/download/18304ms.pdf.

I constructed two robots using stepper motor propulsion. I used seven inch round, 1/4 inch thick expanded PVC for the base of my small model. (Included in the download material at the article link are some basic drawings of the seven inch robot.) For this small robot, I used two Airpax MA82818 stepper motors driving 3.5 inch wheels. These stepper motors can still be found surplus and eBay sometimes has them. They are rated at 12 volts and 47.5 ohms per coil, so at the rated voltage it will draw 252 milliamps. 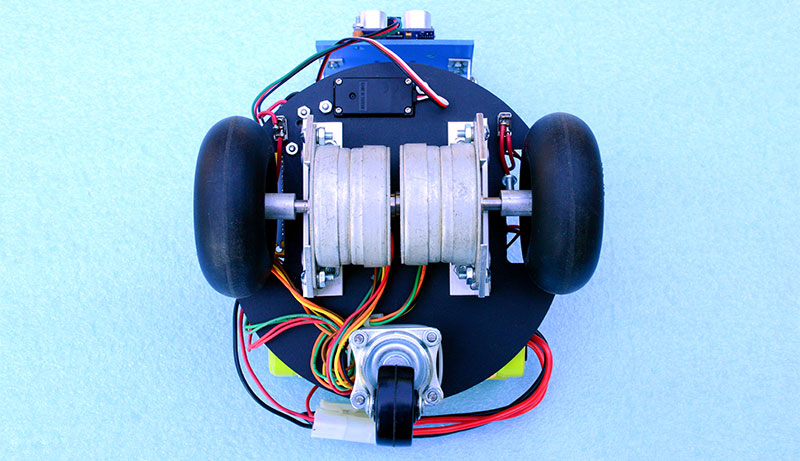 Another choice could have been a Mercury Motor 57BYGH213 which is rated at 6.2 volts and one amp with 9 kilogram centimeters of torque. I have used this Mercury motor in a barn door camera mount which rotates a camera at the same speed as the Earth revolves, allowing for photographing the stars. The holding torque (in general, its strength) is somewhat greater than the Airpax model.

The larger robot used two 14 inch round pieces of 1/4 inch thick expanded PVC for its body. I used larger Bodine stepper motors rated at 100 oz/in holding torque. These motors are 2.25 inches in diameter and 3.5 inches long, and are attached to six inch diameter lawnmower replacement wheels.

I previously used PICAXE and BASIC Stamp microcontrollers for these robots, but am now updating them with Arduino boards. This article will describe the use of an Arduino Mega 2560 board and the Airpax MA82818 stepper motors mounted on the seven inch robot.

The advantage of using the power transistors is that the circuit can be used for stepper motors requiring higher current. In addition, the exercise of writing the necessary software will help to better understand the operation of the motors.

It is not unusual to run stepper motors higher than their ratings — within reason. Not all the windings have current going through them at the same time, so the problem of heat dissipation when running at a slightly higher voltage is usually not a problem. I used two 7.2 volt NiCad batteries in series to drive the stepper motors, and tapped off 7.2 volts from one to power the Arduino board. Figure 1 is the schematic of the dual stepper motor driver. 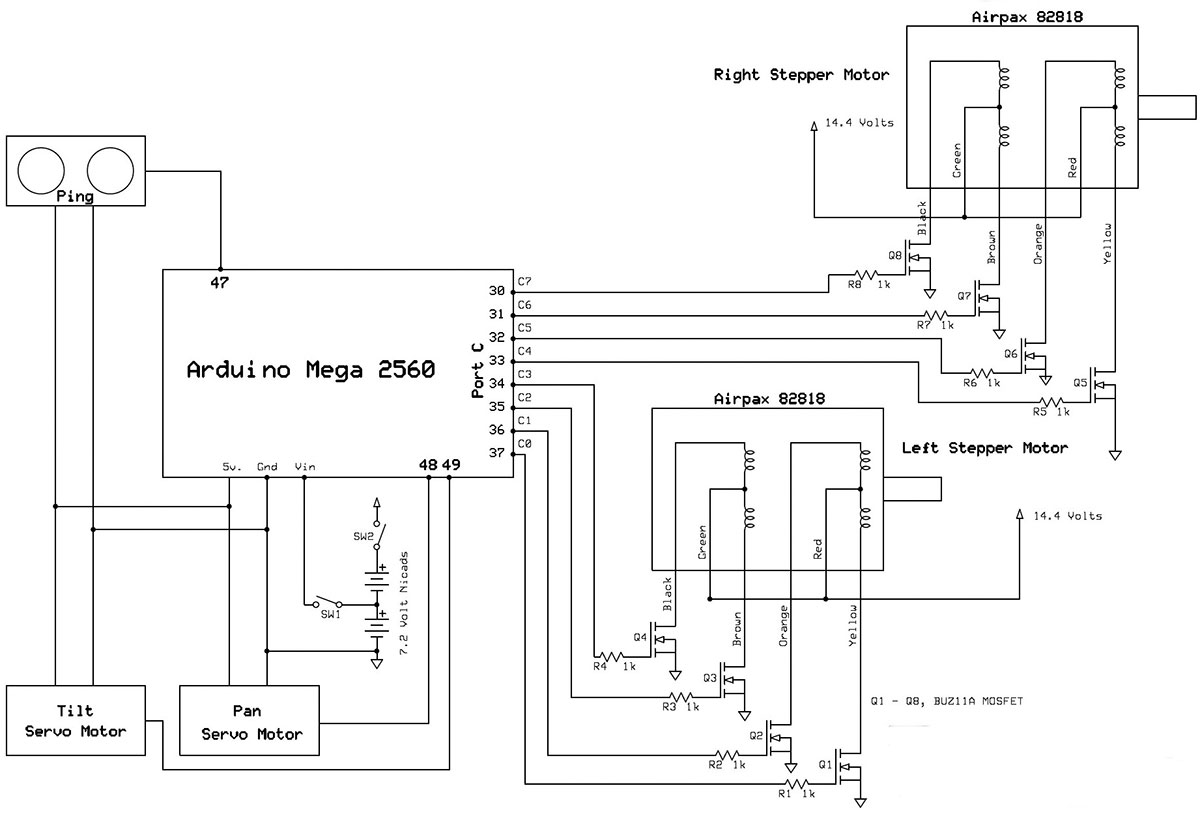 In addition to the Arduino driving the stepper motor, the circuit also interfaces with two servo motors which operate a pan-and-tilt platform which has a PING))) sonar device mounted to it. Because of the large number of connections, I designed a shield — a board that plugs into the Arduino Mega 2560 — which mounts all the driver circuitry. My choice of printed circuit board (PCB) manufacturers was ExpressPCB. They provide easy-to-use software and have a special service called Miniboard that provides three boards — 3.8 x 2.5 inches — for just under $65, which is just the right size for a custom Arduino shield. 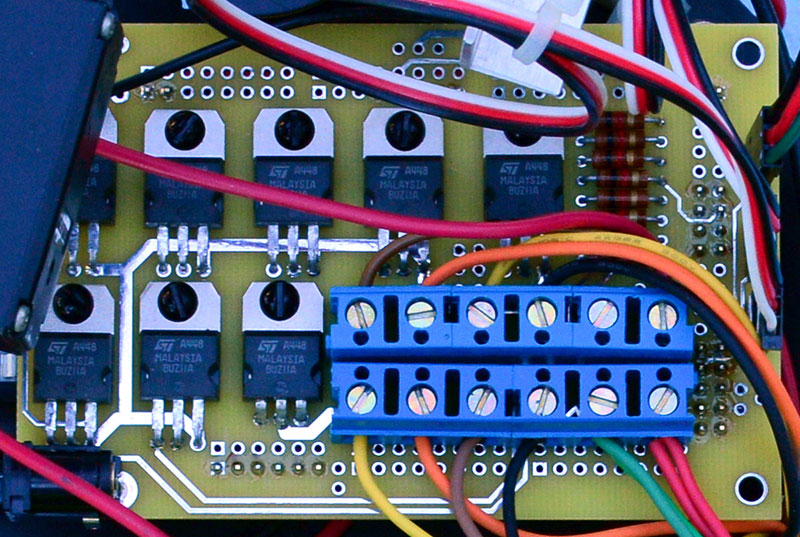 FIGURE 2. Close-up of the printed circuit board that mounts the driver circuitry; the Arduino Mega 2560 is underneath.

The board mounts the MOSFETs, the gate resistors, reset switch, terminal blocks for easy connect/disconnect of the stepper motors, and six three-pin headers for easy plug-ins for the servo motors and PING))) sonar. The ExpressPCB file is included at the article link.

Along with the voltage and current ratings of a given stepper motor, the step angle in degrees is also provided. In the case of the Airpax MA82818, it is 7.5 degrees. So, the shaft on the stepper motor will turn 7.5 degrees for every set of step commands sent to it. Dividing 360 degrees for a full turn of the shaft by 7.5, there are 48 steps for each full rotation of the shaft. So, if the shaft of the stepper motor is connected directly to a wheel, one full rotation will move the robot ahead the same distance as the circumference of the wheel.

The wheels used are 3-1/2 inch smooth model airplane versions. I chose these because they were the right size. A better choice would have been wheels with some tread on them as the smooth ones tend to slip a little — especially on carpet. I constructed simple wheel couplings from 1/2 inch aluminum rod, then placed a threaded hole in the end to attach the wheel, and a threaded hole in the side for a set screw to attach to the stepper motor shaft.

Table 2 lists a sequence of eight different patterns called the half step sequence. So, sending this sequence will rotate the shaft one half of the step angle or 3.75 degrees, requiring 96 steps to turn the shaft one rotation.

With four coils in each stepper motor and two motors, a one byte command can control all eight coils. Each one of the eight outputs on the Arduino will be connected to a BUZ11A MOSFET which will turn on the current through the coil in the desired pattern. Using the Port commands available for the Arduino will work very well here.

In thinking about the position of the stepper motors on a wheeled robot, the output shafts will face away from each other and be connected to the wheels. This means that for both wheels to turn in the same direction, one will have to turn clockwise and the other counter-clockwise. Looking from behind the robot and in the direction desired to move it, the stepper motor on the left needs to turn counter-clockwise and the right one clockwise. Using the four-bit high nibble of the command byte for the right motor and the four-bit low nibble for the left motor, the pattern of commands for two stepping motors to move forward would be:

Repeating this pattern keeps the motors stepping forward. To move both wheels backward, just reverse the order. The same holds true to use the half step pattern, except a pattern of eight commands instead of four must be sent:

To make the robot turn, one wheel needs to turn forward and the other backward. This will rotate both wheels in the same direction. Here is a sample code fragment to move the robot forward:

Another feature of stepper motors is that by just stopping the sequence of commands and leaving the current flowing through the coils as dictated by the last command, the stepper motors act as a brake. If all the driver transistors are turned off, the stepper motors will be released from the brake condition. The Arduino program I wrote included the following definitions:

The functions include the following:

If you are using different stepper motors, these values may need to be changed. Note that with the FORWARD and REVERSE movements, the number of steps defines how far the wheels will turn. With the ROTATE_RIGHT and ROTATE_LEFT movements, the number of steps defines how much of a rotation there will be. These latter values can be changed to accommodate different stepper motors and how far to rotate the robot.

The following four functions all behave in a similar manner and all are used in the stepper driver function to take single steps. The direction is defined in the function call and then both motors take either a full step, a half step, a full step rotate, or a half step rotate. The latter two functions have the motors going in opposite directions which rotates the robot in place:

Here is the entire fullstep_motor function. The others can be found in the code sample included at the article link.

The Pan and Tilt Mechanism

Actually, it is an elevated design, and the Arduino boards fit under it. Except for the expanded PVC board that mounts the PING))) and the connecting wire, the entire device is made from short pieces of 1/2 inch x 3/4 inch aluminum angle that’s 1/16 inch thick.

The pieces are fitted together mostly with 4-40 machine screws and a few pop rivets. Figures 3 through 5 show the basic construction of the pan and tilt mechanism. Space was allowed on the expanded PVC board for a Pixy camera (a future addition). 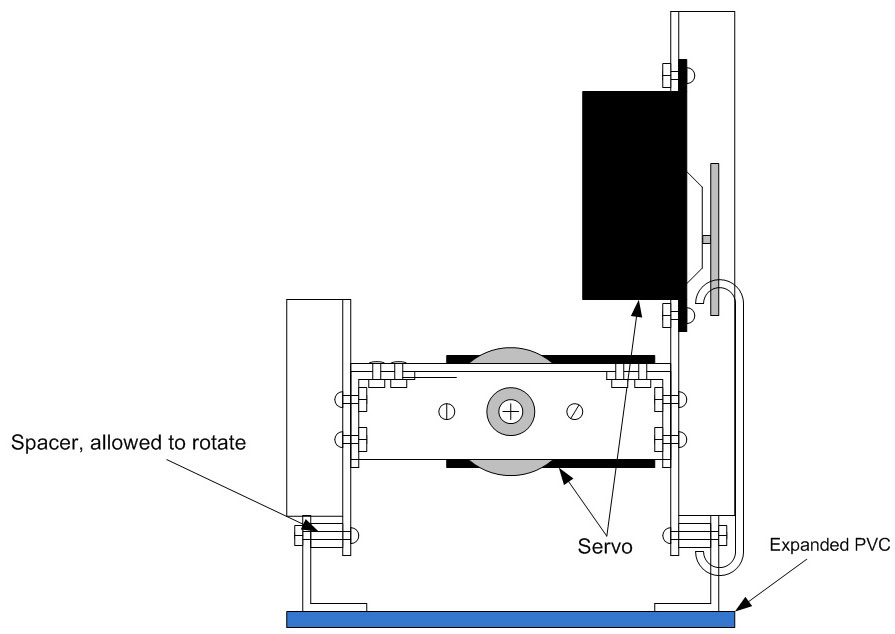 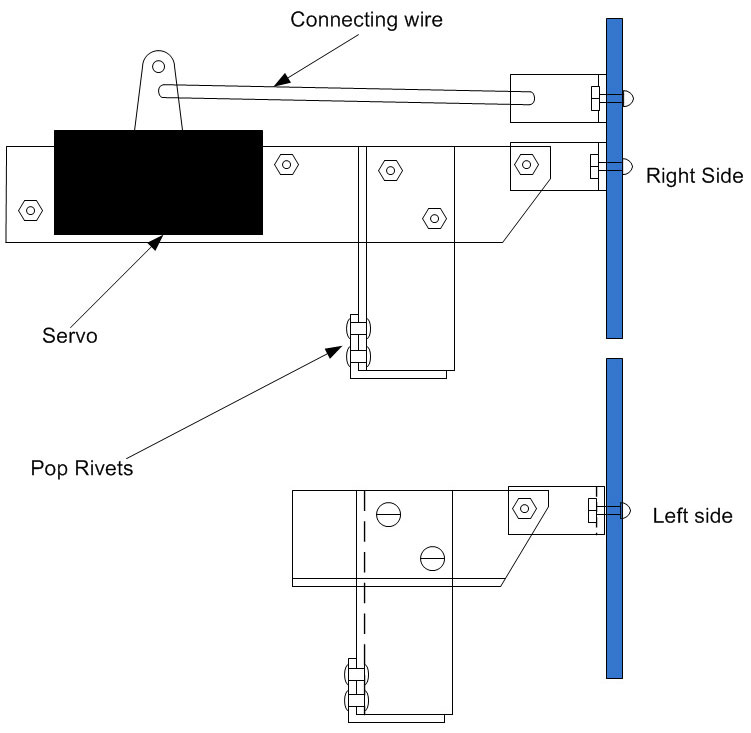 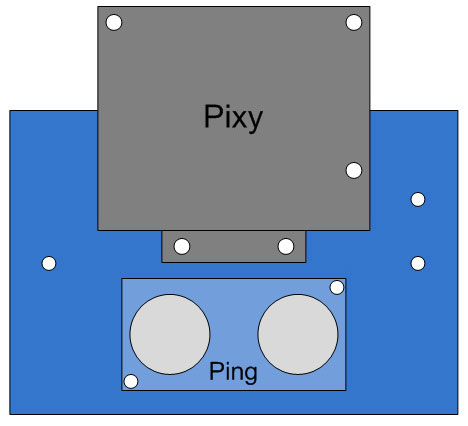 FIGURE 5. Front view of PVC Board.

Software for the Servo Motors and PING)))

The Arduino website (www.arduino.cc) provides a library for operating the servo motors. At the top of the program, the following statements are added:

Then, add in the setup portion of the Arduino program:

This creates two servo objects: one for the pan and one for the tilt servo. In the setup portion of the program, connect them to specific output pins on the Arduino. The particular pins have headers connected to them so the servo plugs can be easily attached. To position the servos so the expanded PVC board is facing forward (pan) and level (tilt), these statements are added:

Positioning the servos to control the pan and tilt of the PING))) board is just that easy. The values needed to come to a center position will vary based on the pan/tilt mechanism used and will have to be changed accordingly.

The software to send a PING))) sonar burst and obtain the distance of an object in front of it is also fairly simple. The following example was taken directly from the Arduino website, and was added to the program without modification:

// The same pin is used to read the signal
// from the PING))): a HIGH pulse whose
// duration is the time (in microseconds) from
// the sending of the ping to the reception of
// its echo off of an object.
pinMode(pingPin, INPUT);
duration = pulseIn(pingPin, HIGH);
//Serial.println(duration);
// convert the time into a distance
inches = microsecondsToInches(duration);
cm = microsecondsToCentimeters(duration);
}

The sample program is a simple avoidance sequence. The main loop contains the following:

The pan/tilt mechanism is set to pan to a forward position and the tilt then looks up, center, and down. It pings in each of the three positions and remembers with the Boolean variable temp whether there is anything less than 15 inches in front, or slightly down or up in front of the robot. If there is something in front, the robot rotates to the left a little more than a quarter turn (50 steps). Otherwise, it continues in the forward direction.

This concludes the building of a small robot propelled by stepper motors. The next step of this project will be to add a Pixy camera to the pan/tilt mechanism and experiment with its capabilities.  SV