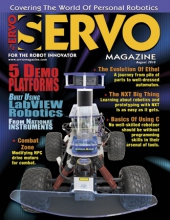 The Evolution of Ethel

This enthusiastic bot builder chronicles his robot’s journey from a pile of parts to a well-dressed automaton.

Time to break out that LEGO MINDSTORMS NXT kit! We’ll start with a basic build following step-by-step instructions and then in future articles, we’ll create some very unique projects utilizing things like Bluetooth and additional sensors.


Getting Down to Some Basics of Using C

Mechanically-inclined roboteers tend to gravitate towards the hardware side of things for solutions. However, they’ll soon C the beauty of having the tool of programming in their arsenal.

This next installment shows you how to develop a user interface for the VEX microcontroller using a DIY LCD display and a numeric keypad.

Then and Now
by Tom Carroll
Robot Applications
Robots have come a long way since the first industrial robots of the early ’60s.

The first blade I had created for our 3 lb beetleweight, Pure Dead Brilliant, had been done in a big hurry to meet weight for its first competition.

National Power Chair (or NPC) has been in business for many years, rebuilding and selling electric wheelchair motors and parts to individuals and wheelchair repair facilities throughout the country.

The BC8HP charger is an update to Bantam’s already popular BC8 model. In short, Bantam has kept all the good features, increased the power rating, and improved the ergonomics.

Ray Billings sent in this great selection of damage shots. All of these are results of fights against his HW Last Rites.