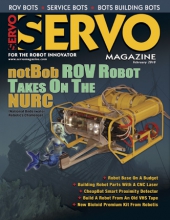 Learn the details of ROBOTIS’ latest offering in the humanoid league.

Follow this family team’s build of a submersible robot that captured the overall winner award at the 2009 NURC competition.

by Jose I Quinones

A CNC laser is a powerful and highly versatile tool. Learn some of the advantages, disadvantages, and basic techniques to have this machine build your machine.

See how using an optional PC interface can let your robot learn some dif ferent tricks.

This proximity detector incorporates a PIXAXE-08M so that it takes care of detecting obstacles and leaves the driving to the robot controller.

High-quality color graphics for your mechatronic creation are just a serial port away. Microchip’s new P32MX microcontrollers have six serial ports to choose from. This month we’ll use one of them to drive a 4D Labs ?OLED-128-G1 Display Module.

Remember VHS cassette tapes? Well, now you can turn them into robots!


Base on a Budget

Get a useable robot platform up and running with only a minimal budget.

GeerHead
by David Geer
Artificial Intelligence Brings Humanoid Robots to Life (Part Deux)
It is not so much the practicality of humanoid robots that drives interest in their development as it is the familiarity, sources say. “People are interested in things that are anthropomorphic. This makes interaction with [humanoid] robots easier,” says James J. Kuffner, PhD, associate professor of the Robotics Institute at the School of Computer Science, Carnegie Mellon University.

Then and Now
by Tom Carroll
A Brief Look at Service Robots
Let’s look at the service category, which can include sub-categories of personal and consumer robots (toys, vacuum cleaner robots, etc.), military and defense robots, security robots, academic and research robots, healthcare and hospital robots, and a vast array of remotely-operated vehicles.

by Chris Williamson
in The Combat Zone

First and foremost is lathe safety. You are working around very fast rotational parts with high torque. Please be aware of your surroundings, and remove all jewelry, long sleeves, and anything hanging that could stand a chance to get caught up in rotational parts.

Back in the November ‘09 issue, I ended the Hole Drilling story with a reference to sharpening drills. I have now purchased a Drill Doctor 750 sharpener and the results are surprising and worth sharing.

by Joey Daoud
in The Combat Zone

At Mayhem in Miami, it wasn’t without a bang that Fluffy earned the name Flamin’ Fluffy, and made the South Florida robotics event be true to its name.