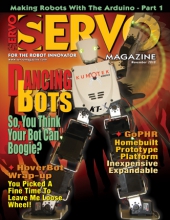 Dancing Bots! So You Think Your Bot Can Boogie?

The idea behind this homebrew build is to develop an open source hardware platform capable of performing useful household tasks, plus be expandable.

Microcontrollers aren’t always the most clever electronic components in a robotic design. In the case of the eM8, the abundance of basic circuitry consisting of some common CMOS latches, decoders, and multiplexers complete the design.


Making Robots With the Arduino — Part 1

It just makes sense to look at ways to leverage the popular Arduino development board for use in robotics, and that’s exactly what we’ll be doing. We’ll start with some basics and introduce ArdBot — the robot base we’ll be working with.

A feast for the sensors! This time, learn how to use two light sensors to accurately follow a line in any direction.


HoverBot: You Picked a Fine Time to Leave Me, Loose Wheel!

This time, we wrap up our HoverBot project with an explanation of the drive electronics.

GeerHead
by David Geer
University of Akron Competition Robot Roundup
Events such as RoboGames attract bright minds and hungry competitors from across the country.The University of Akron’s student roboticists were well prepared with well-designed, efficient, and intelligent mobile robots.

Twin Tweaks
by Bryce Woolley, Evan Woolley
So You Think You Can Dance?
his month, we have the pleasure of presenting the KT-X Bipedal Humanoid Robot from KumoTek. KumoTek is a Texas-based robotics company with products ranging from building inspection robots to hobbyist kits.

Then and Now
by Tom Carroll
Robot Cars
The idea of robot cars has been around for many decades and, in fact, “automatic mobility” vehicles were envisioned from the very first automobile, though total autonomy as we know it today was not possible at the time. There have been many unique robotic developments that have been employed in various personal transportation devices. Science fiction movies and TV productions have long used robot cars in their sets, and most depictions are a bit off in their technology.

On the ever interesting Robot Fighting League forum, I ran across this spontaneous product review. It meets my criteria for this column, which is “builder tested.” I am a firm believer that all product reviews should be after they’ve been “in the box."