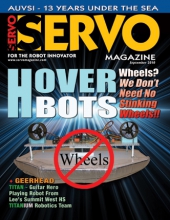 Whether you have Versapak tools or not, this circuit can be used to charge any NiCd or NiMH battery pack and can restore what you may have thought was lost (battery wise, that is).

Wheels? We don’t need no stinking wheels with this unique bot that’s lighter than air.

This time we get touchy-feely by first learning how the computer software included in the kit works. Then, we’ll use our first sensor to navigate our robot around a room.


The Wasp Embedded Processor Takes the Sting Out of C

If you’re already a C expert, you’ll be interested in the hardware discussed here. If you’re a hardware guru and want to know more about how C and an AVR microcontroller can work together for your robotic projects, there’s something for you too.

GeerHead
by David Geer
Titan, Baddest Guitar Hero Playing Humanoid on the Planet
A high school robotics team is tasked to solve complex programming and design problems in robotics to achieve a worthwhile goal for their age group in popular culture. Their resolution: a humanoid robot that effectively competes in a significantly high percentile in the Guitar Hero video game, defeating most opponents.

Then and Now
by Tom Carroll
Robot Manipulators
One of the most famous robot manipulators in use today is the RMS or Remote Manipulator System used on the Space Shuttle.

It does not matter how powerful your robot is, if you cannot transfer that power to the floor. Wheels are the single most important part of your robot because without them doing their job properly, the effectiveness of every other capability is reduced.

by Bradley Hanstad - Team Think Tank
in The Combat Zone

The world of plastics and composites is considered a space age science, yet the industry started in the 1930s. Over the years, the composite industry has evolved and so has the amount of information.

Dalton O’Conner of Team Massacre Robotics sent in this one. The bot is Sonic the Hedgehog from the 12 lb class.