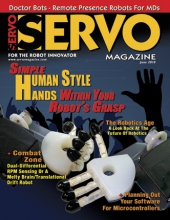 Give Your Robot a Better Grip On Things

Add a whole new dimension to your robot by giving it a helping hand (literally!).


Planning Out Your Software for Microcontrollers

The use of microcontrollers in hobby robotics continues to grow, but creating software for them can be intimidating. Matt takes you through his favorite process for developing software using a simple puzzle box project as his point of reference.

This article shows you how to implement PWM into your robotics design by demonstrating the principles through two simple projects.

Learn two methods of interfacing LCDs into your next build as we connect a low cost character LCD to the VEX microcontroller.


Add a Transceiver to Your ZeroG Trainer

Expand your Trainer project from last month by adding a transceiver to the mix.

Enhance Your Plain Vanilla Benchtop Power Supply With a PICAXE

A power supply is an essential tool for any roboticist’s workbench. This article presents a cost-effective upgrade to get the functionality and flexibility you’ll need.

GeerHead
by David Geer
Remote Presence Robots Put Physicians Within Reach
The Remote Presence (RP) robots from InTouch Health enable physicians to be literally anywhere — in the emergency room, the ICU, at home, the office, or even at the same or dif ferent hospital.

The Combat Zone
by Kevin Berry
MANUFACTURING: Tentacle Calculator Rehosted by Killerbotics
The combat robotics community was deeply saddened by the passing of Steve Judd last year. Steve was an icon in the sport, and left behind a lasting legacy in many areas.

Then and Now
by Tom Carroll
The Age of Robotics
A lot of people speak of the age of robotics. They’ve been doing that for decades. Sometimes these words are just hype by a book publisher to promote a book, whereas others are truly convinced that the period in which they live is the beginning of the age of robotics. They see robots everywhere in their lives — on TV, in the movies, cleaning their carpets, exploring space, and building cars world-wide.

Knowing exactly how well your bot performs in a particular configuration would be very useful ... like, exactly how fast is the blade turning? What current is the weapon motor drawing at start-up and at cruise? How much does the battery voltage sag at full power?

The combat robotics community was deeply saddened by the passing of Steve Judd last year. Steve was an icon in the sport, and left behind a lasting legacy in many areas.


Open Melt — Generous Sharing or a Threat to Society as We Know it?

The author — in a blatant attempt to up his word count and thus his income — summarizes material he’s already sold to SERVO once ...

This month, only one builder submitted to Greatest Hits. Going by the mystery handle “kkeerroo,” this Australian fighter highlights his bot — “Vendetta” — competing at RoboWars 7 in a semi-final fight against a spinner call Bender.

by Dan Toborowski
in The Combat Zone