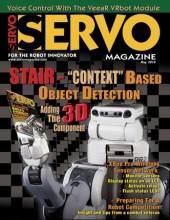 Researchers at Stanford and Cornell are pioneering new methods of teaching robots to interact more fluently with their surroundings using the STanford Artificial Intelligence Robot (STAIR) as the base.


How to Prepare For - and Maybe Even Win - a Robot Competition

Get some insights and helpful tips from a veteran of robot combat.

Our Navigation code will get a bit more complex, so this month the focus will be on how the individual sections work.

This time, we'll put everything together to turn that bucket o' bolts into a working ComBot.

Learn how to monitor systems, display status via an LCD, activate relays, drive solid-state relays, and flash status LEDs, all via the top of a tiny wire antenna.

GeerHead
by David Geer
Hot Dog! Robot serves up wieners!
If you want people to pay attention to your technology, blend it with something that lots of people already love. In this case, that turned out to be the all-American hot dog!

Twin Tweaks
by Bryce Woolley, Evan Woolley
Robonova – Come Here – I Want to See You
This month, we have the privilege to present the VeeAR VRbot voice recognition module which comes to us courtesy of Tigal. Tigal is a high-tech electronics distributor from Austria, and the VRbot module is designed for use with the Robonova-1 from Hitec (and with its Japanese cousin, the Robozak).

I recently completed our first drum bot — Weta, God of Ugly Things. And while it is a pretty conventional design, it does have one feature rarely seen in bots of this type: The drum is reversible, so it can spin in either direction.

by J Miles
in The Combat Zone

For those unfamiliar with CNC routers, I am building a three axis machine, meaning it can move in three different directions: backwards and forwards (the Y axis); side to side (the X axis); and up and down (the Z axis).


PARTS IS PARTS: Kitbots Rolls Out B-16 Gearmotor Mounts

Ihave a pretty solid policy that this column only promotes parts that are thoroughly “combat tested” by the fighting community. This month, I’m bending that policy.

Last month’s debut of this new feature generated a lot of buzz — or should we say crash!