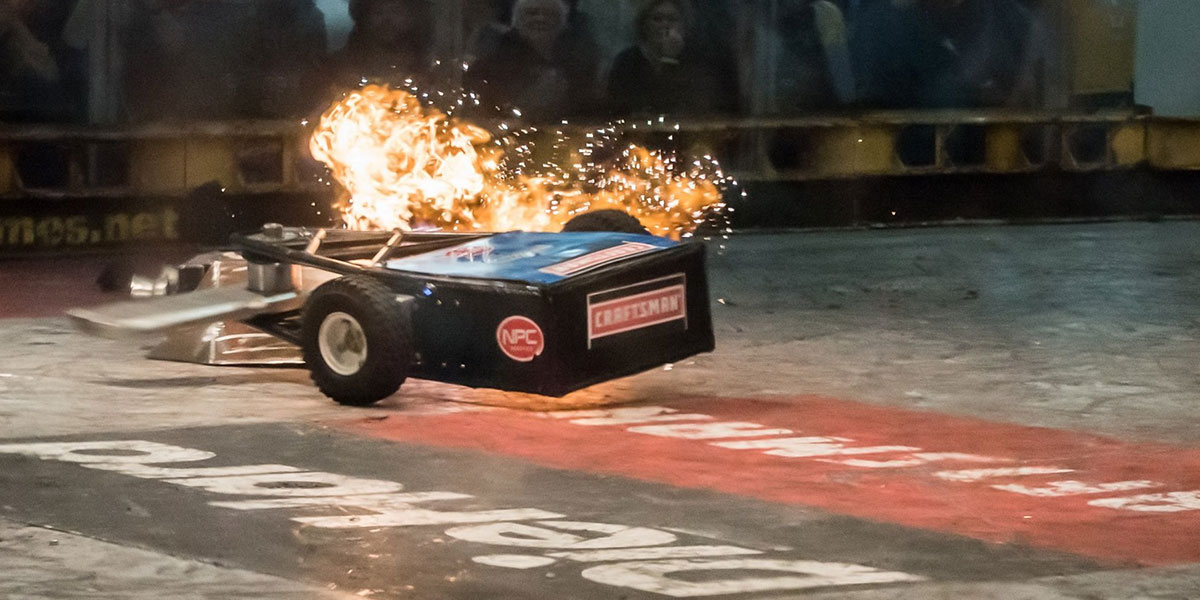 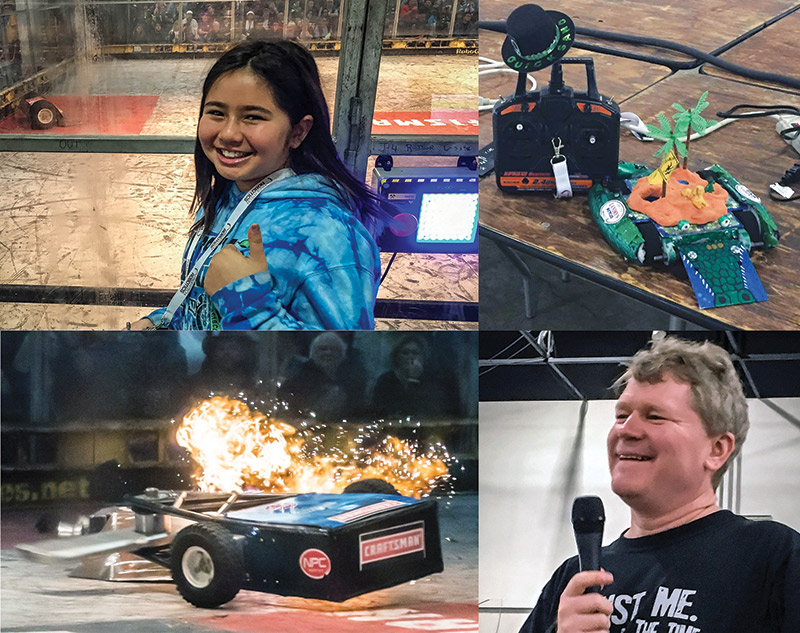 The crowd lights up. What was once a lethal 120 pound killing machine now lies lifeless on the arena floor; its batteries producing a white-hot flame that jumps from the gaps of its shell. The referee looks back and forth at the two members of the safety crew before declaring enough is enough as the buzz of the audience fills the room. Charging in, extinguishers blazing, the fire is quickly put out. The opposing robot is deactivated as quickly as its driver can charge through the growing veil of toxic smoke. With thunderous applause, the charred cadaver of the middleweight is hauled outside as the arena is left to air out.

It’s only my first day on the job, and chaos is already breaking out. Just as planned.

Like every member of the robot combat community, I know about RoboGames. David Calkins, president of the Robotics Society of America, started the event in 2004 as ROBOlympics, and it has only grown bigger since then. Gone are the days of frequency crystals and NiCads — nostalgia does not bring one closer to the coveted gold medals that have been the top prize in the sport for over a decade. Most machines have ditched their aging ETeks and Vantecs for high power brushless motors and the latest in speed controller technology: the Ragebridge 2 or Victor BB.

In the interlude, I walk through the pits, observing the plethora of bots in all weight classes being readied by their crew members to fight on a moment’s notice. Kelly Smith works to fit a new leading edge onto Psychotron’s wedge — it’s the first time the robot has fought at competition since 2004. So too, is the case for Knucklehead, the lightweight who ended up being knocked out of the competition in the first round, as it had been back in 2002. On the far side, Original Sin — a multi-time champion and one of the bots favored to win — is getting some TLC from Gary Gin, whose strategy of powerful four-wheeled wedges has netted him multiple gold and silver medals over the years — even a ComBots Cup.

Last Rites — the perennial machine of death and total destruction — sits nearest the arena as Ray Billings and Rick Russ work on the former. Considering that a decade ago, their machines were a thwackbot and a heavyweight with ‘active armor,’ it becomes ever more amazing to gawk at the beautiful design of Last Rites’ spinning weapon. So too, is Swamp Thing — the durable spinner killer sporting its front wedge with two steel additions; in time, these too will be chewed up by the infamous Brazilian machine.

The Brazilians stayed together. Team ThundeRatz, Team U!airrior, and the infamous Team Riobotz — all work frantically on their bots, punctually stating their needs for parts and tools in Portuguese to one another. The love of the sport and camaraderie showcased by them — teams who have regularly battled one another in Brazil for years — almost appears to make Calkins smile as he walks by. Nope, must’ve just been imagining things.

For those of you who don’t know anything about RoboGames, it’s the largest open robot competition in the world. A massive variety of mechanical disciplines are practiced over a period of three days at the event, which brings forth the absolute best competition from around the world. All desire to do the same thing teams do at the Olympics: to bring home a medal and gain further glory for their country in the electronic arts.

Ten categories generally detail the sorts of challenges found at the event. While RoboGames is most known for being the home of extremely brutal robot combat in eight weight classes, it does have far more going on than that. Humanoid robots compete against one another in kung-fu, or Sumo — sometimes they get fitted with airsoft guns and shoot at one another. A wide variety of more traditional tracked and wheeled Sumo classes are found as well, in classes ranging from 25 grams to three kilograms. Bot-hockey is a popular event, and a wide variety of artbots (some of which mix and pass out drinks) often enamor the crowd, dazzling them with spectacular displays of light, sound, and action.

Kids — being an integral part of the community — have always been welcomed at RoboGames, with the Junior League existing especially for them. For most, it wouldn’t be fair for them to tangle with professionals with decades of experience straight away. Most is a relative term, however. During the 2016 event, I was informed that three kids — all under 13 years old — had swept the adult three pound combat category, taking gold, silver, and bronze and leaving the 40 year old men to sadly go home medal-less.

Saturday grew more ecstatic as the tournament proceeded. T-800 sent itself flying around the arena as though it were channeling the essence of Tornado Mer, balancing on its side as it rolled across the arena, trying to right itself and bash the Brazilian bot, Apolkalipse into immobility.

Vlad the Impaler II is back again, as well. The creation of Gage Cauchois — a veteran of the original robot combat events — has seen much action, passed between builders. This year, the Hjeldens are driving as it faces off against Robot Wars competitor, Foxic. The last time Vlad II fought a British robot, it suffered a humiliating defeat. However, this time, it’s the orange machine that suffers a breakdown, leaving Vlad’s luck pointing upwards.

Craig and Chris Danby — both of Team Danby — are the only British team competing in the combat robot weight class. Their robot Foxic still bears the scars of its appearance on the BBC — and of Last Rites, whom it took excessively well. Craig dislikes the design, and indeed that Foxic would find itself completely replaced with a new machine, readied for next year’s event. The almost 20 year veterans of the sport intend to win the 2017 gold medal.

The Brazilians may not have worked together, but they were exceptionally successful. Touro Maximus’ win over Original Sin in the grand finals of RoboGames 2015 seems to have paved the way for Brazilian teams to keep winning. More medals were won by Brazilian robots in the three large weight classes than by American robots — the first time this has ever happened. Apolkalipse, Touro Classic, and Touro ensured that no American middleweight would win a medal, while Uairrior’s Federal MT claimed the gold from the American ProPain-clone Tastes Like Burning in the grand finale. Touro Maximus was not up to snuff, only taking a surprising third as Original Sin regained its crown for the first time since 2013. 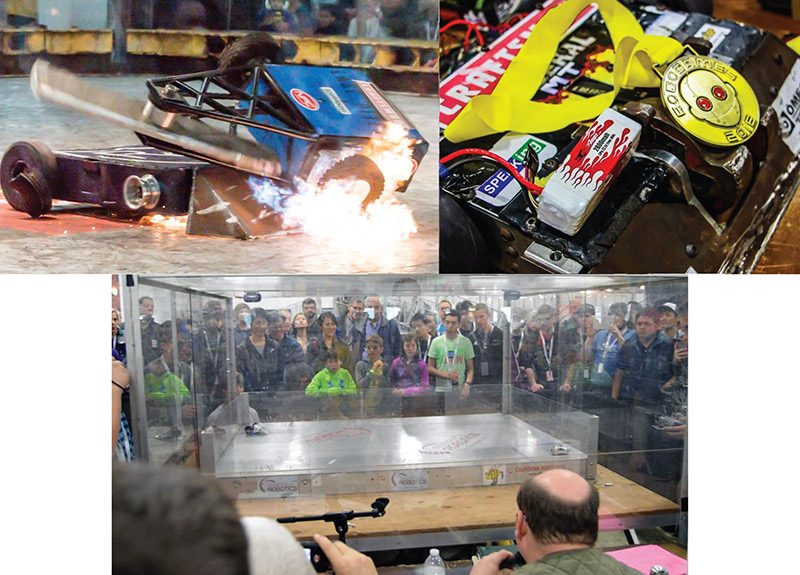 As time passes, registration opens up for this year, and registration is fierce. Half a dozen Brazilian teams intend to replay the Brazilian lightweight championship in California. Herr Gepounden makes a return, slipping into the last slot as lightweights completely fill up in record speed. The heavyweights soon follow, with robots like Sewer Snake and Megabyte making their return to the Combox. Team Echo signed up; though they lost to medalists last year, their performance was exceptional. Collegiate teams from the University of Virginia, University of Texas at Arlington, UC Merced, UCLA, and Georgia Tech all have sent teams to compete. School teams have been regulars at RoboGames. Universities and high schools have often found combat robotics to be a fun way of teaching engineering to students.

RoboGames 2017 will be an event to remember. With record numbers of registered robots, the highest quality competition in the world over multiple weight classes and events, and teams eagerly awaiting the contest this April, something special is certainly coming.