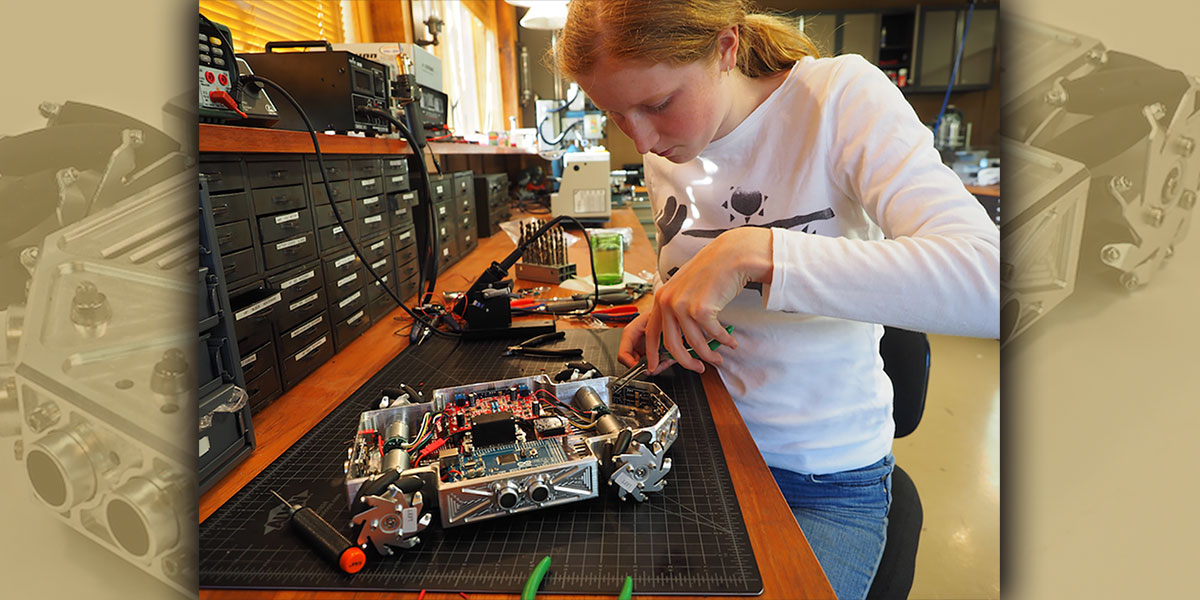 The fascination with robotics has a tendency to start at a young age — as kids, many of us had Jetson-like fantasies of robots doing all of our chores, leaving the humans to do the “important” things.

Robert Beatty’s daughters, Camille and Genevieve, have taken a more practical approach. They just want to build robots. Not just simple, beginner bots; they build custom rovers and drones. Beatty says it all started when Camille was about 11 years old, “She was getting curious about things around the house and started taking them apart. She’d take apart things like remotes, phones, and calculators, and bring them to me in a pile, and say ‘Dad, what’s this thing in here do?’”

Beatty didn’t have experience in robotics or engineering. He was in software development, so the family took to the Internet for answers and the kids took interest. “I suggested that instead of taking things apart, we could start building things. I was thinking of something like a kit — like an LED lighting up — because I didn’t know much about that at the time,” Beatty explained. “Camille immediately said, ‘I want to build a robot.’ That seemed a bit daunting, but I said we’ll see what we can do. It’ll take a while, but we’ll see what we can learn.”

After stumbling upon some maker-oriented distributors and video-blog roboticists, the family joined the maker movement as their learning progressed. “When we started out, we didn’t know how to solder, didn’t know what common ground meant, didn’t know anything about Arduinos or machining or tools. The only thing that I had coming into it was that I was a software developer in my previous corporate life,” Beatty admitted.

The robots started out simple, but quickly progressed as the girls made one after another. “As soon as we got one done, we’d build another one. Then, we built the website to share our creations with our family and friends. Soon, lots of other people saw the site as well, and it became very popular. Then, we got a call from the New York Hall of Science.”

The New York Hall of Science had seen a rover that the family built, and commissioned the Beattys to build a working replica for them. Since then, they’ve produced interactive rover replicas for various museums, including the Discovery Centre in Kuala Lumpur City Centre, and have been invited to the White House.

When hand tools were no longer providing the precision and consistency needed as the robots became more complex, the Beattys looked into CNC machining. “We cobbled together our own CNC by buying stepper motors, and Z axes, and built our own computer. We basically built our own homemade CNC.”

The needs of the three makers quickly outgrew their homemade machine, Beatty expounded, “In particular, we wanted to be able to change tools rapidly. Our homemade CNC was just a collet with wrenches — it was a pain to have to change tools. So much so, that we tried to design parts and our operations such that we didn’t have to change a tool.” They use a full array of 20 different tools for their robots.

The Beattys purchased a Tormach PCNC 1100 mill to complete their shop. The use of a power drawbar and an in-house designed tooling system made it a suitable replacement for the family’s homemade CNC machine. 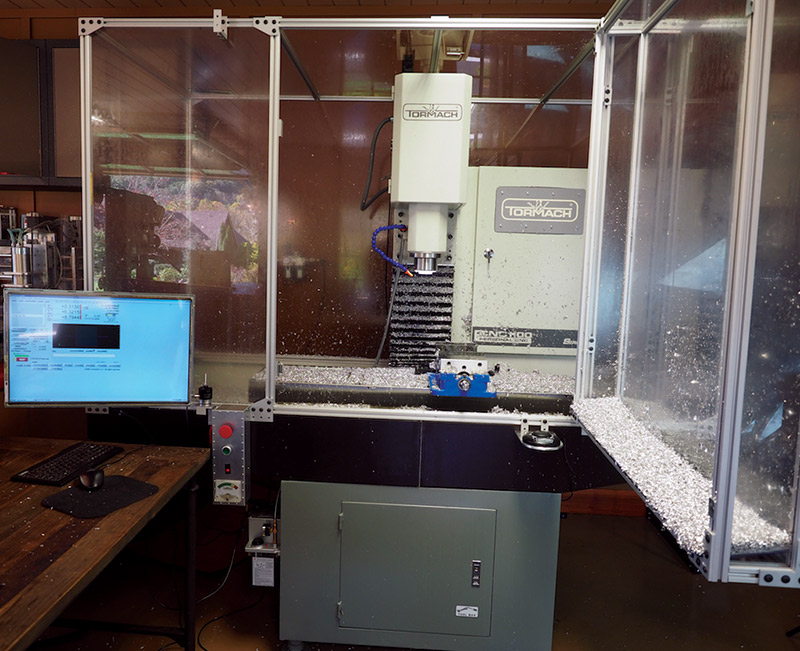 Being new to machining with these capabilities, Beatty liked the availability of Tormach’s components and resources. “I liked the fact that it was a turnkey solution — tools, software, mill, controller — it showed me that the company had a full breadth of capability and understanding of what was required.” 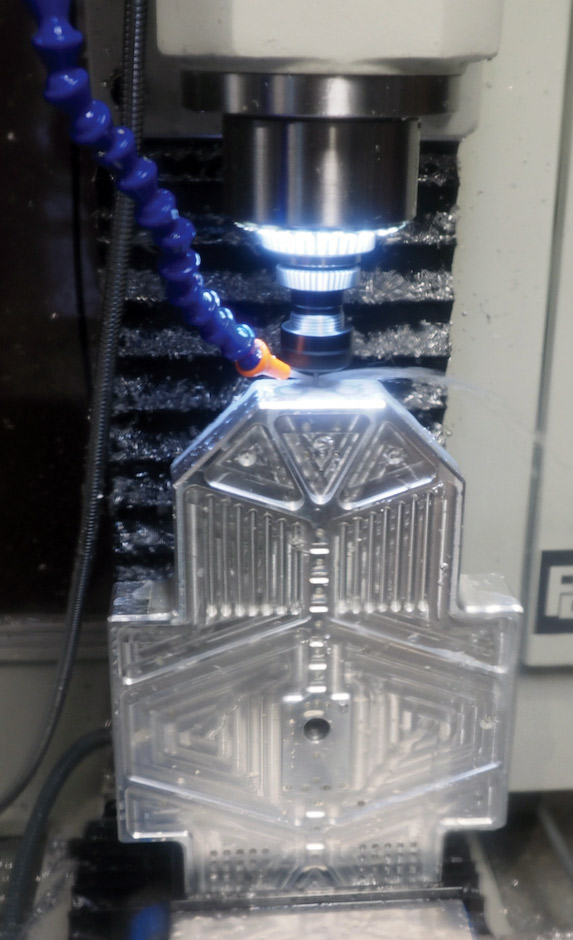 One of the first robots they did on the new mill was the Metalbot — a unibody design that made full use of the Z axis. Because of the unibody design, the part had features on every side, requiring the Beattys to clamp the part in eight different orientations. 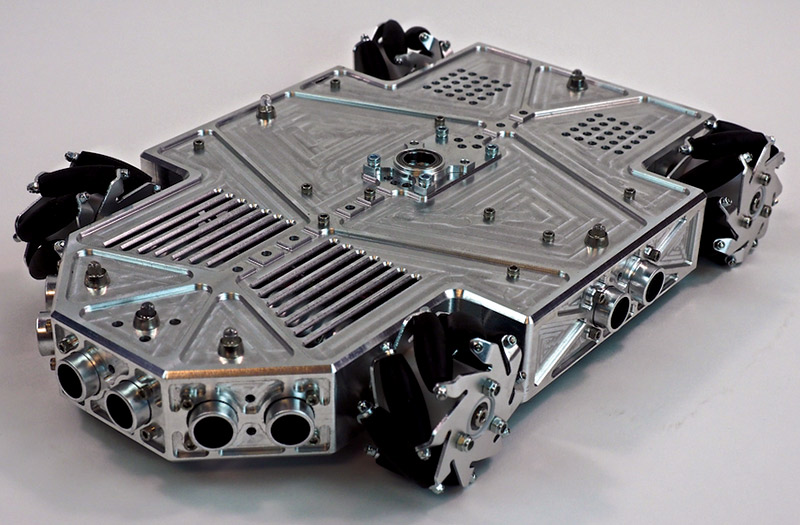 Everything starts with a concept from Camille and Genevieve. “They’re the ones driving it, so if they see something or think up something, we’ll start with paper sketches. Most of that is done offline, and then when we know what we want to do in terms of the wheels and the body, then we start thinking about the electronics that we’ll need.”

Their design process is focused on an end product, rather than the individual elements as they go. “We have a very good idea about where the electronics are going to go when we design and make the parts,” Beatty commented. The design can take days of work, while the actual machining only takes an hour.

Currently, they are working on more rovers for the New York Hall of Science.

Beatty takes a lot of pride in his daughter’s creations. “All along as we’ve evolved in our skills and capabilities, they have been doing the hands-on physical work. I guide the process. Sometimes I learn offline and teach it to them as we go, but they’re doing all the work.” 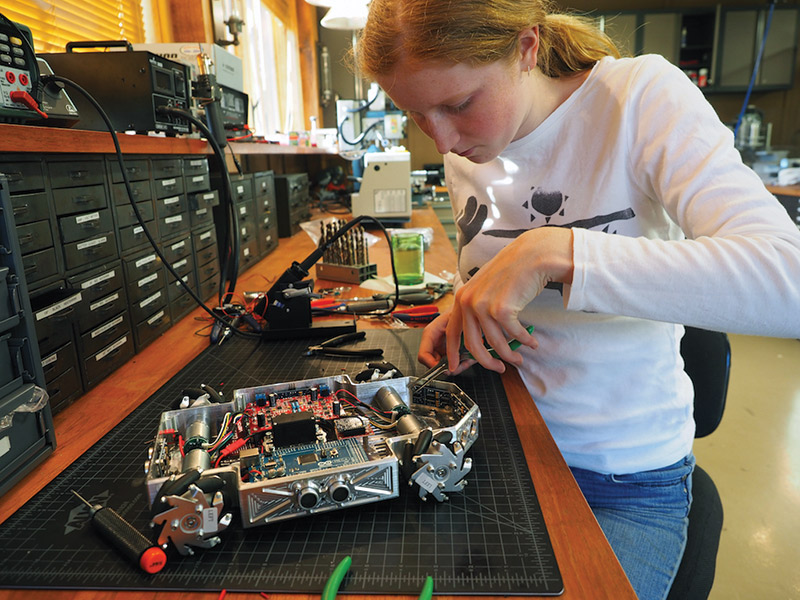 According to Beatty, the number one rule in getting your kids to have fun with stuff this complicated is to make them do all the work. “It doesn’t work if the parent does all the work and the kids are watching — that just bores the kids, and they’ll walk away from that. Have them do the work. Have them hold the drill or run the CNC or do the CAD work.”

The Beattys have been quite successful, but they continue to move their organization forward. The girls recently took on their first intern — a fellow classmate who had surpassed the high school’s robotics program — and they are progressing towards making better, more complicated robots.  SV