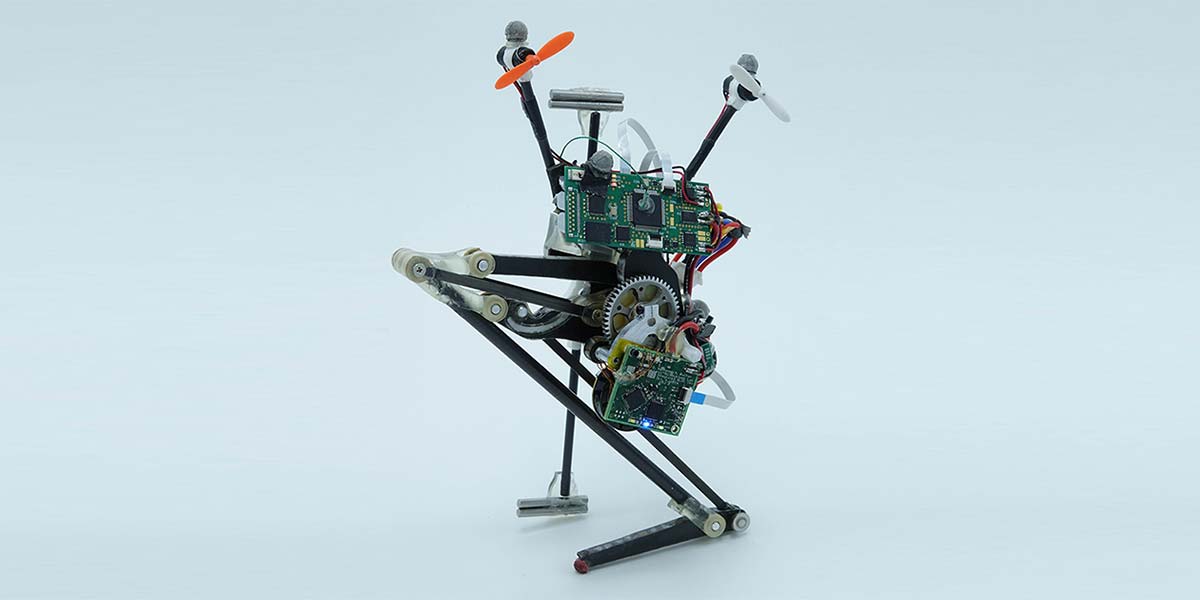 Meet Salto: The “most vertically agile” robot, capable of jumping better than humans.

When search and rescue workers respond to a structure that has collapsed, one of the greatest threats they face is another cave-in while seeking out survivors. Over the years, there have been several attempts to address this — from mobile cameras to audio sensors to drones and more — but they all face severe limitations when it comes to navigating unstable wreckage.

Researchers at the University of California Berkeley’s Biomimetic Millisystems Lab are currently working on a possible solution to this problem: a small, maneuverable robot inspired by a species known as galago senegalensis — more commonly referred to as a “bushbaby.” 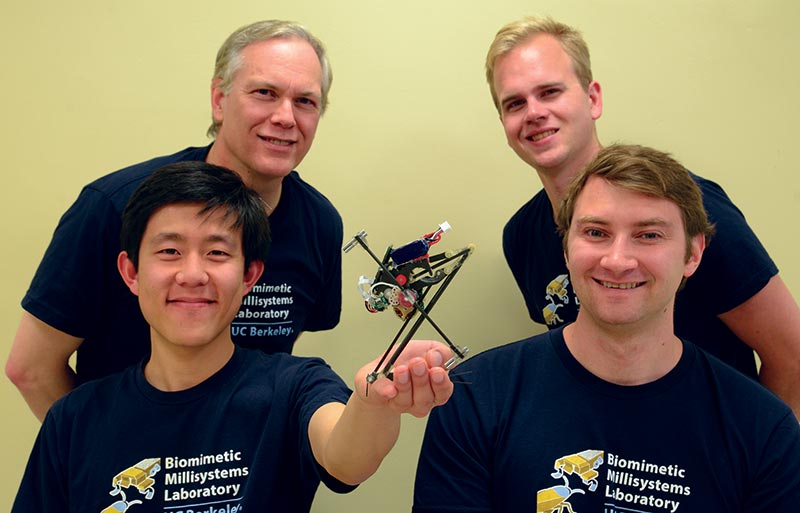 The bushbaby is a small nocturnal primate, typically no more than 30 cm long. They can often be found flitting from tree to tree at night, and their powerful legs can propel them to heights of 8.5 meters after bouncing five times in just four seconds. This is due in part to the elastic energy storage found in the tendons of their lower legs, making it possible to jump higher distances than relying on muscles alone.

The jumping abilities of bushbabies have been extensively recorded and documented by a host of researchers. That made the small creature ideal for the Biomimetic Millisystems team, as they considered new ways to harness features of animal movements and control strategies to improve the capabilities and performance of small robots. That led to the creation of their new project: Saltatorial Locomotion on Terrain Obstacles, or Salto for short.

The research was supported by the US Army Research Laboratory, which is interested in building robots that can maneuver through challenging terrain.

A recent paper in Science Robotics shows that instead of tendons, Salto has a motor-driven spring which stores energy as the robot enters a crouching position. The spring can be recoiled quickly, so Salto is ready to jump again and can leap to reach greater heights; galagos’ legs act in a similar way to how the pulleys in a compound bow make it possible to release an arrow with more power than arm strength alone. 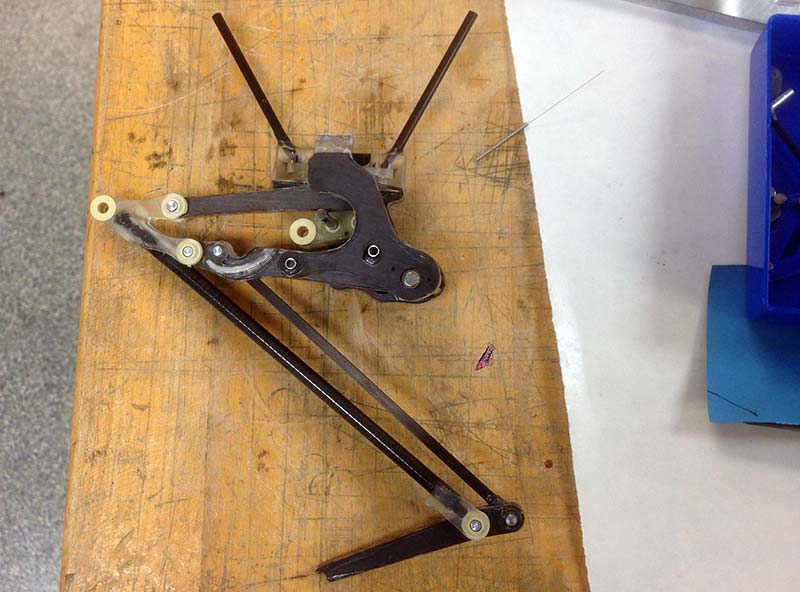 The bushbaby’s motion in flight also allows them to remain compact and then extend their feet at the last possible second, which enables them to chain huge jumps together — one after another — off multiple surfaces.

The previous record for the best vertical jumping agility was held by Minitaur, a slightly larger and clunkier-looking robot that can jump at about 1.1 meters per second. Salto doesn’t jump the highest, however, as the robot TAUB — modelled after a locust — can leap to 3.2 meters in a single jump.

TAUB — modelled after a locust — can leap to 3.2 meters in a single jump.

TAUB stands for “Tel Aviv University and Ort Braude College.” It’s 12.7 cm (5 in) long and weighs 23 grams (less than one ounce). The ABS plastic body of the robot was 3D printed. Its legs are composed of stiff carbon rods, and its torsion springs of steel wire. A small onboard battery powers the robot, which is remotely controlled via an onboard microcontroller. It was also developed to handle search-and-rescue and reconnaissance missions in rough terrain.

Obviously, Salto departs from the bushbaby in that Haldane got rid of a number of limbs. Why? Well, because he could, plus you don’t have to design a perfect mimic to harness an animal’s powers. “Salto has one leg right now because we wanted to see how far you could push a robot with one leg,” explained Haldane. “Even if you have one leg, we’ve shown that you can move in three dimensions.”

Although still very much a prototype, it can spring up, bounce off walls, and — in theory — move through small and unstable places quickly with relative ease.

The Vicon system offers pose tracking at 100 Hz over an area of roughly two meters wide by four meters long. Recorded data is then sent to a laptop running the Robot Operating System (ROS), which estimates Salto’s velocity based on the pose data. 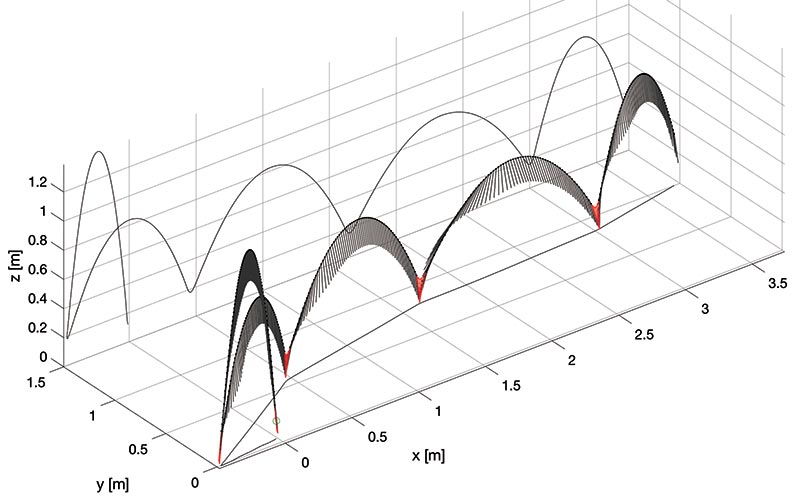 It then calculates control signals and sends necessary data back to the robot over an XBee radio connection. The Vicon system replaced a previous set of high speed cameras which lacked detail and required a separate system to process the data.

The current version of the robot — known as Salto-1P — features lightweight propellers to control its tilt and heading. It has a takeoff velocity of over four meters per second and spends around 70 ms on the ground during each stance. 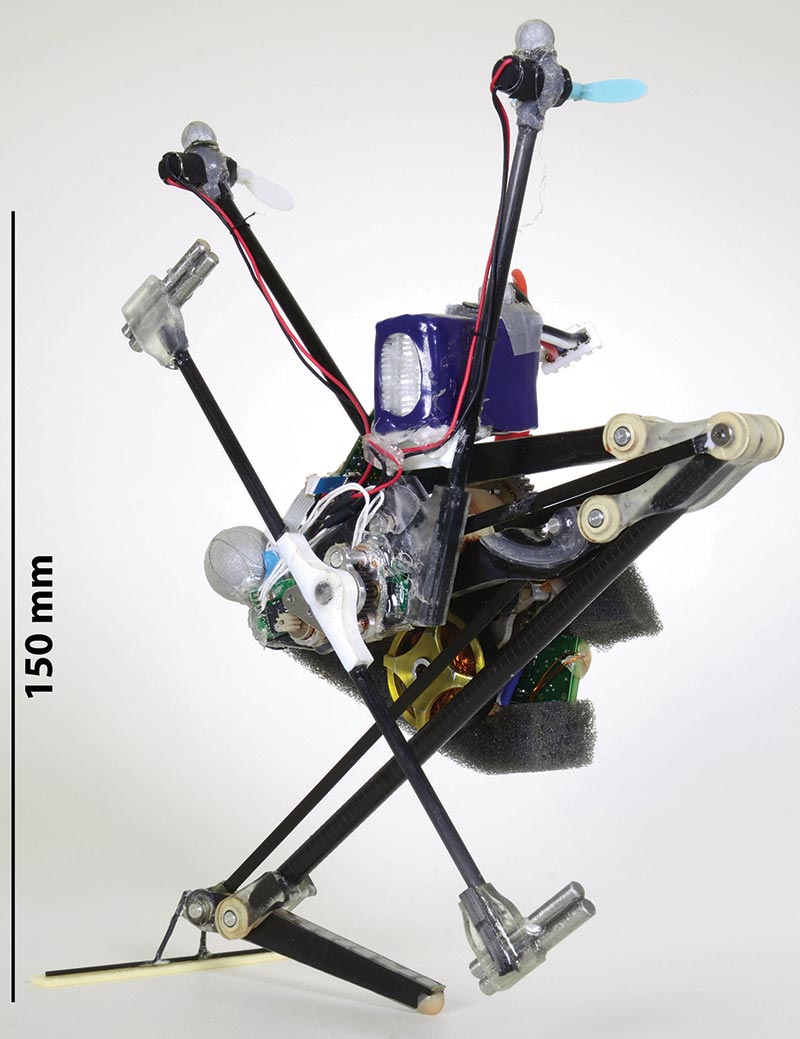 The team controls the battery-powered robot by setting its orientation in the air based on its location, how fast it’s going, and where it will touch a solid surface.

Once it lands, the optical system detects contact. The controllers then transmit a burst of energy to send it airborne again and repeats.

Ultimately, it will be up to the end users to decide how best to utilize Salto, including what type of controls and cameras or observation tools to equip the robot with.

There’s still a lot of work that needs to be done before the little robot can realistically be used in a real life rescue situation.

For now, the team will continue to work on precision controls, followed in the near-future by onboard sensors in the hopes that one day their little robotic bushbaby will help save lives.  SV