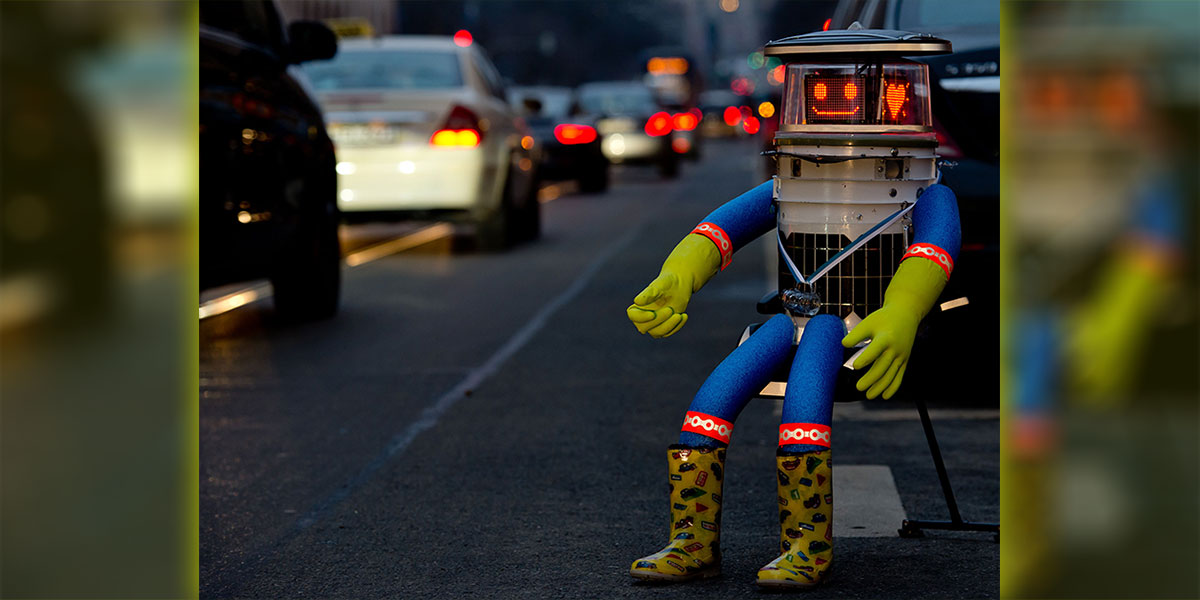 The Adventures of HitchBOT

Every once in a while, a project comes along that people can really rally around. One that people can cheer on and keep up with. Years ago, people could recall seeing the Google mapping car that scoured the streets of local cities; the DARPA Robotics Challenge captivated and entertained supporters while helping develop robotic support systems. A recent project named HitchBOT is a seemingly less meaningful, but much more endearing example. 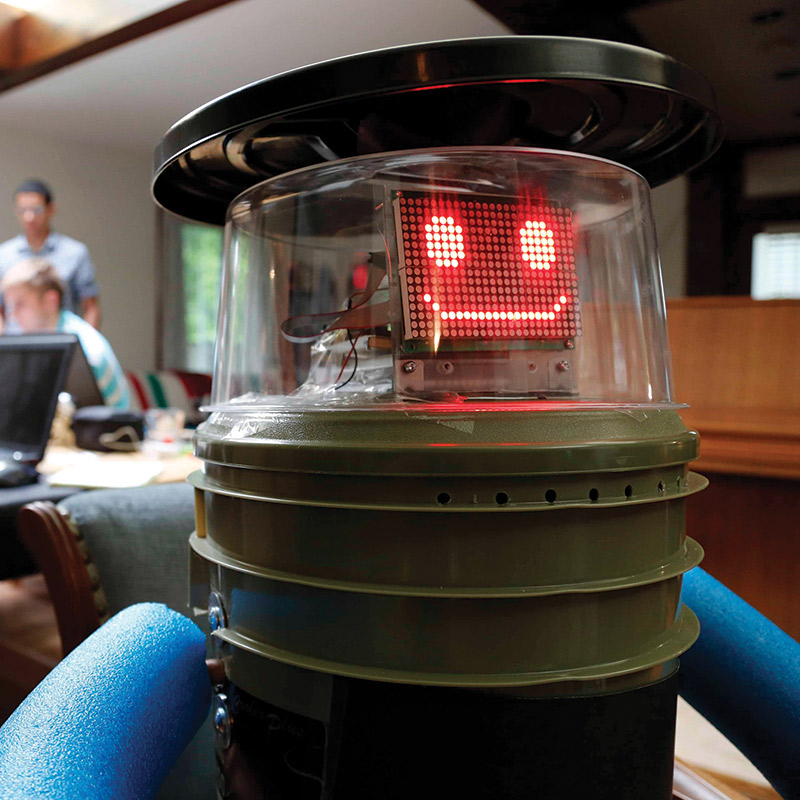 HitchBOT is a Canadian made robot that was created to hitchhike from one end of the country to the other. It would rely completely on the kindness of strangers to get it from one end of Canada clear to the other coast, then later through Germany, the Netherlands, and the US.

HitchBOT’s first trip from Halifax, Nova Scotia to Victoria, British Columbia was a complete success. It hitchhiked over 10,000 Km and traveled the distance in 21 days, hitching 19 rides along the way. 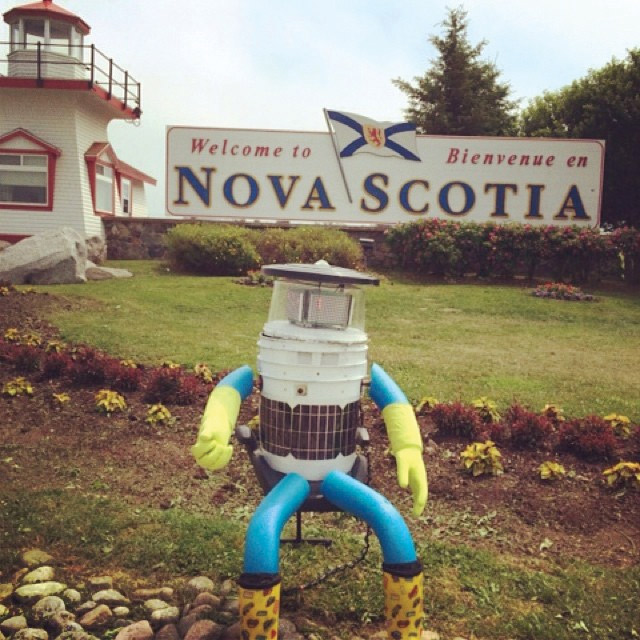 His route was fairly flexible — much like a hitchhiker’s would be. Because drivers are all heading to different places and traveling different distances, HitchBOT was happy with any ride that took him in the direction of his end goal. 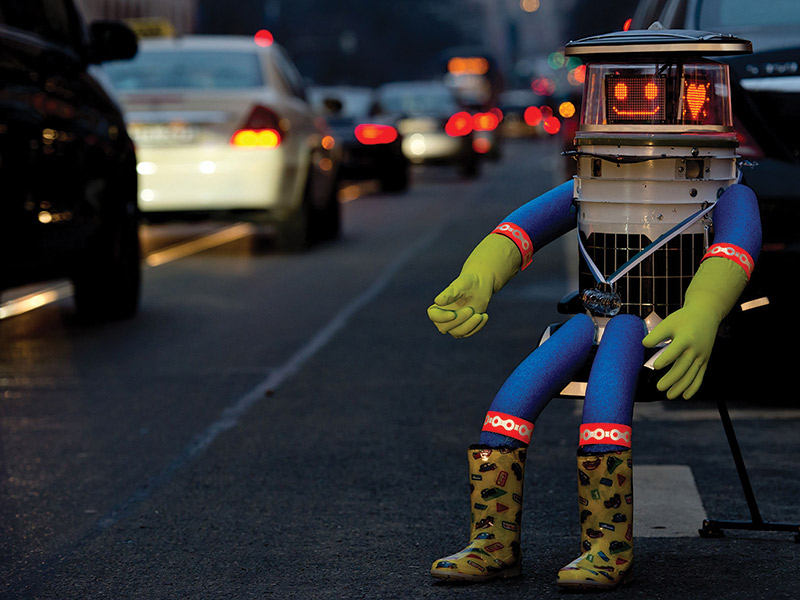 HitchBOT waiting to be picked up outside of Halifax, Canada.

His inviting smile and programmed blinking — along with his small body and goofy rubber glove hands — were all planned to make him appear more innocent and more likely to receive help. 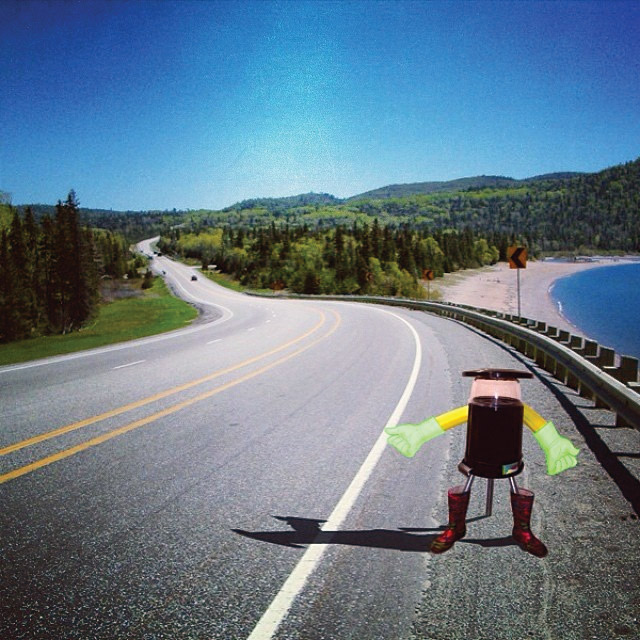 HitchBOT waits to be picked up on the Canadian highway.

The robot was picked up by varying types: couples, groups of guys on vacation, a group of campers traveling, single people — all eager to help make history. 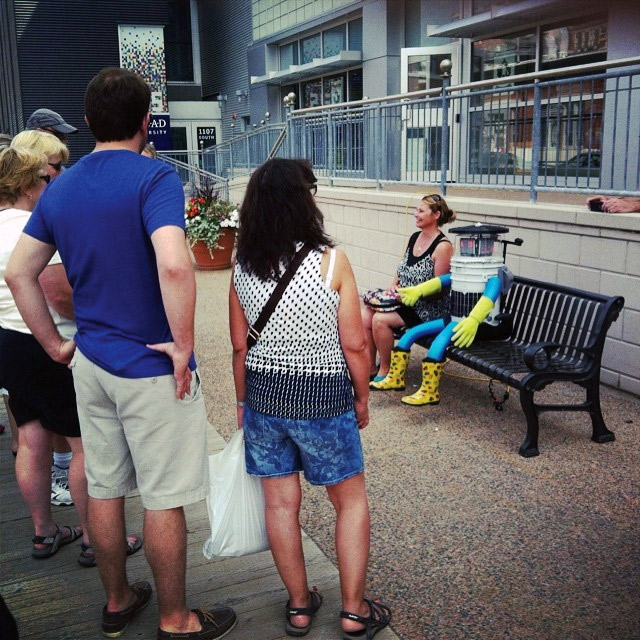 HitchBOT takes pictures with some new friends in Halifax.

On top of being all around cute, HitchBOT has the entirety of Wikipedia programmed into his robotic brain, so he could converse on just about any topic someone could think of — past the point of interest. 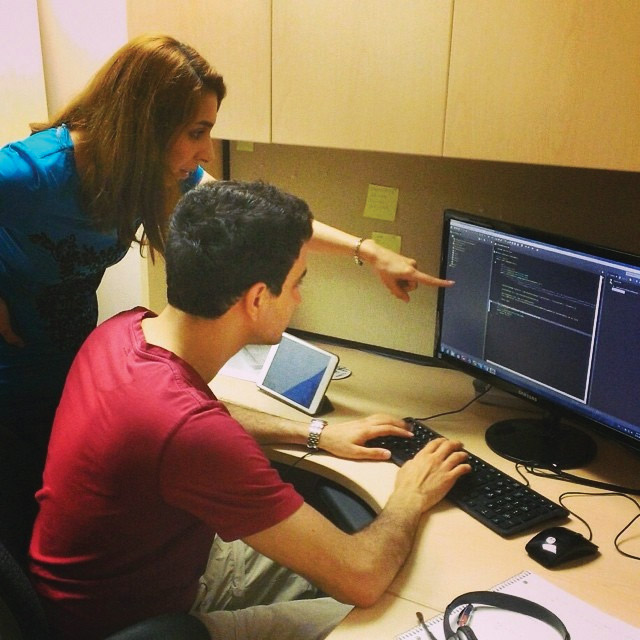 Two of HitchBOT’s creators testing his trivia knowledge. He has all of Wikipedia programmed into his robotic brain.

When drivers got tired of HitchBOT running the topic of sports, or cars, or the War of 1812, or whatever they initially wanted to discuss, he was programmed with a few commands to make him stop. You could kindly ask HitchBOT to “be quiet” or “take a nap” and he’d happily shut his robotic mouth for a few hours to enjoy the ride. 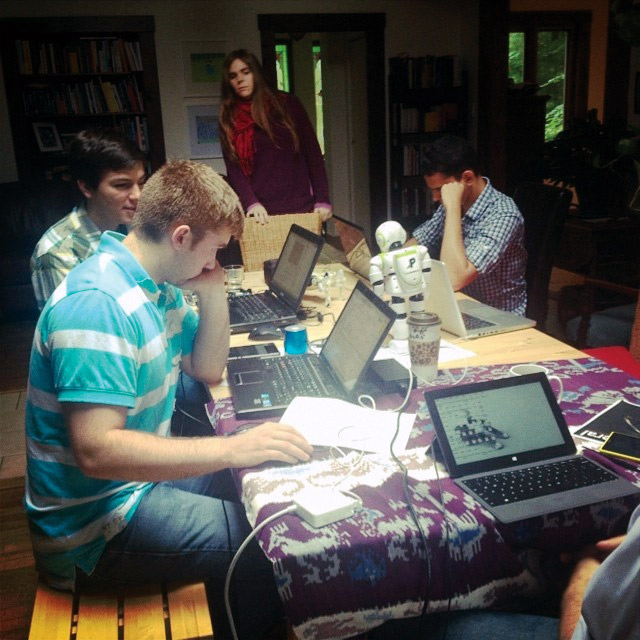 HitchBOT’s creators getting prepared and discussing his trip across Canada. 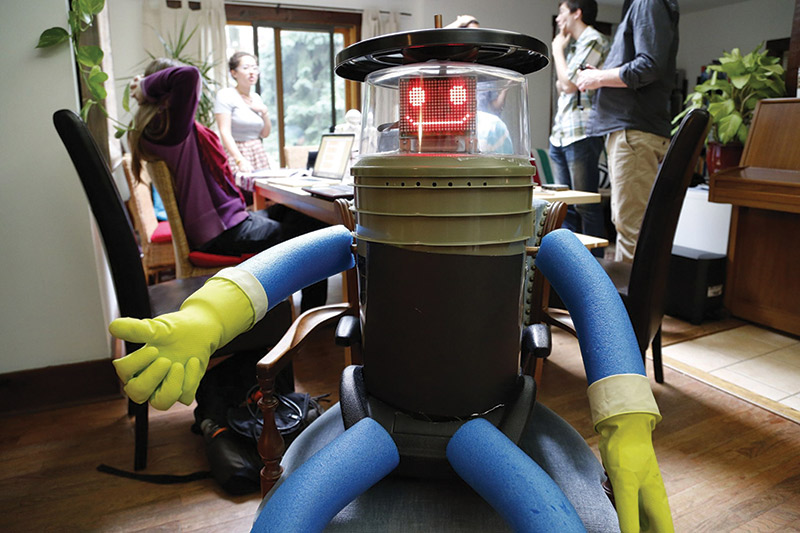 HitchBOT posing while his creators work out his trip details.

Many photos were taken along his journey. He attended a wedding, saw his original creator’s family in Toronto, and danced in Saskatchewan. 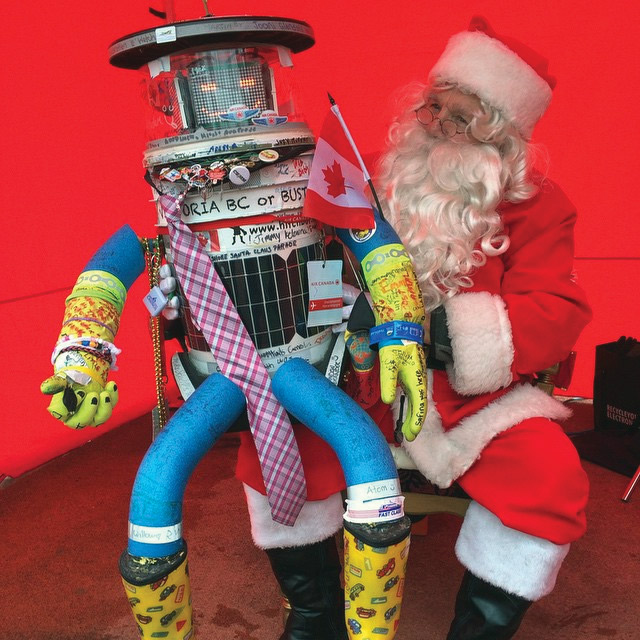 HitchBOT sits on Santa’s lap after the Lakeshore Parade near Toronto.

HitchBOT successfully completed his Canadian journey in mid August of 2014, and he never lost his smile anytime along the way. 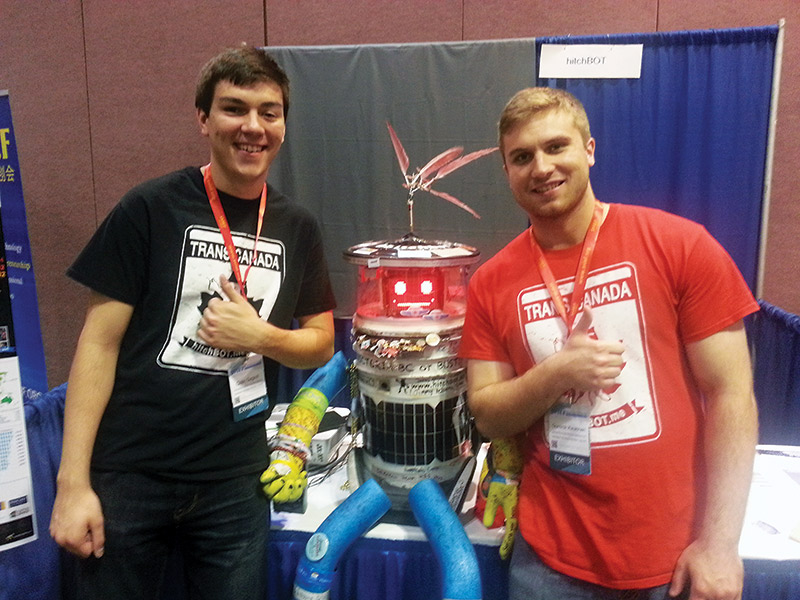 HitchBOT posing with two fans at a Canadian convention.

He was even given an official pilot wing pin from an Air Canada pilot on his flight back. The creators of HitchBOT — Dr. David Harris Smith and Frauke Zeller, along with their team of researchers — credit HitchBOT’s success to positive media coverage and the willingness of Canadian participants to see the experiment succeed.

Not long after the completion of the Canada trip, HitchBOT embarked on his next trip: from Munich, around Germany, then back to Munich. This trip was less than half of the Canada trip, lasting just 10 days. However, it was just as eventful. HitchBOT visited the Neuschwanstein Castle near Füssen — one of the most famous castles in Europe. Then soon after, as in Canada, he attended a wedding as an honored guest. He visited a carnival in Cologne with a marching band and marched in the Rose Monday Parade before hitching a ride in a sports car.

In preparation for the trip, the creators (obviously) programmed HitchBOT with the ability to speak in German. They asked participants via Twitter to suggest topics and phrases for HitchBOT to learn, so he was happy discussing national team goalkeeper, Manuel Neuer, Bavarian cream pies, or any other suggestions citizens could think of. HitchBOT’s journey continued with an appearance on a network talk show before he enjoyed a movie night in with a couple.

His final travel companion was German band, “Who’s Panda?” who enjoyed the publicity for their show later that night. He concluded his trip with a conference, where his creators gave a keynote speech and went over highlights from his trip. Once again, they credited social media and positive attention from German TV show, “Galileo.”

HitchBOT then continued his adventures in the Netherlands, where he went on an arts and culture “vacation.” He landed in the Amsterdam airport and then made his way to the region of Twente to explore some of the finest historical and cultural sights Europe has to offer. He visited art museums and had a portrait drawn of himself before conducting a band at the Kulturhus Borne — a culture center. It’s a mixture of theater, library, music school, recreational center, etc.

He, of course, didn’t leave the Netherlands without taking a boat ride and trying on traditional wooden clogs. Finally after an eventful vacation, HitchBOT attended a fare well party and got on the plane back to Canada. 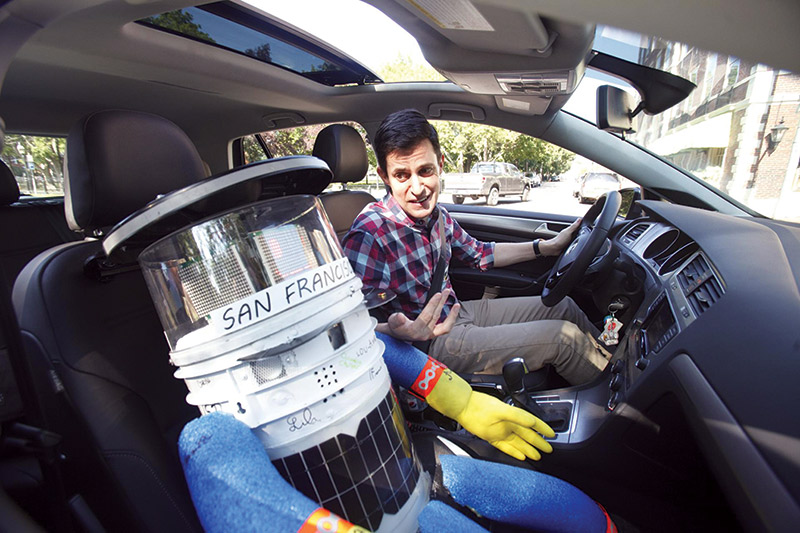 HitchBOT being interviewed in America before his attempted cross country trip.

HitchBOT soon announced his USA trip, starting in Boston, MA and going all the way — manifest destiny style — across the country to California. 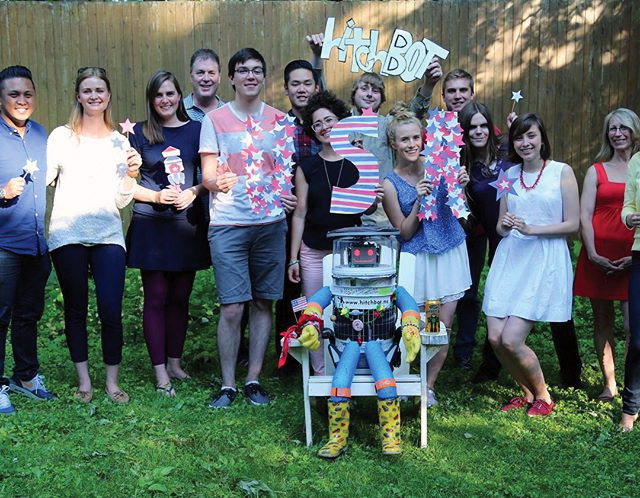 HitchBOT poses with some friends before he began his USA journey. 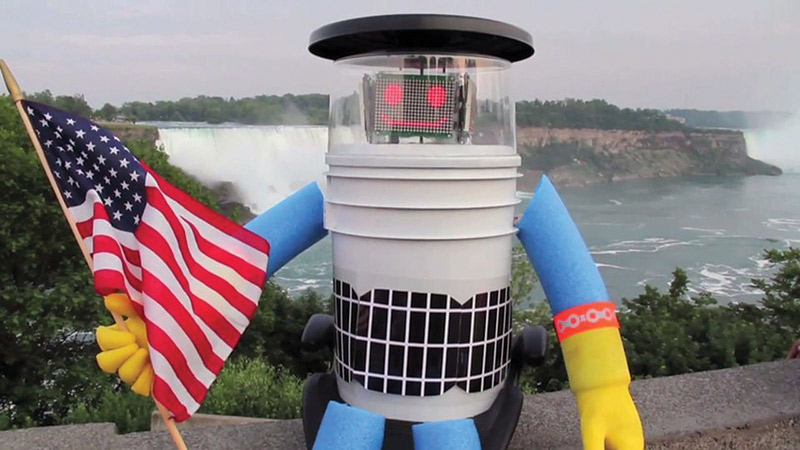 HitchBOT posing in New York at the beginning of his USA trip.

Like other trips, he got citizen input via social media to pick out his stops and bucket list items. This list included seeing Times Square, the fireworks at Walt Disney World, listening to jazz music in New Orleans, and, of course, spending a night at the casinos in Vegas. His end goal saw him traversing the US and taking thousands of miles to do so.

He arrived in Boston and had his launch party before hitching a boat ride and seeing some of Boston’s quintessential sights like Public Garden and Common and, of course, watching the Red Sox play in Fenway Park. He then traveled to New York City, where he would take his first ever subway ride and see the lights in Times Square, checking off another bucket list item. After this is when HitchBOT’s dream of hitchhiking across the country turned into a nightmare.

In Philadelphia, he was sitting in a popular tourist area waiting for his next ride. He fell into the wrong hands and was badly vandalized. This is a tragedy that embarrasses us in the technology community throughout the US. Many people would have loved to see HitchBOT, maybe pick him up and show him what they enjoy about their area. It is upsetting that a few selfish people could ruin a project and experiment that was loved and participated in by residents of multiple countries. But alas, in the words of HitchBOT himself, “Sometimes bad things happen to good robots.” 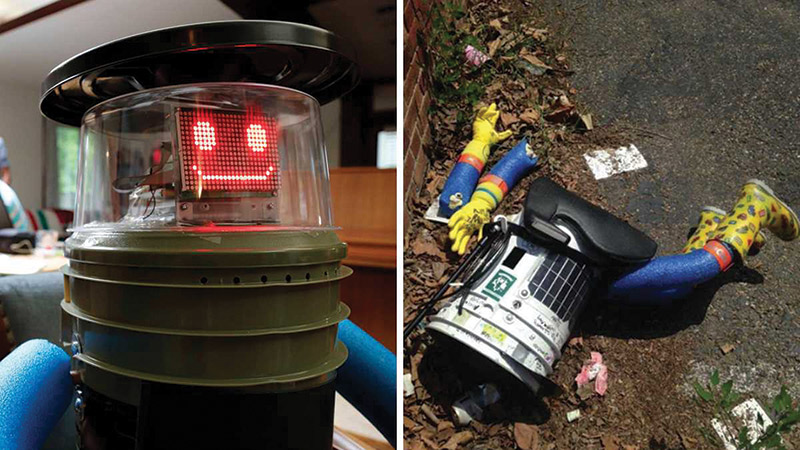 Before and after HitchBOT’s Philadelphia vandalism.

On a positive note that shows the “brotherly love” aspect of Philadelphia, many robot builders and programmers are offering their help with HitchBOT. “If we get the okay from the creators to repair or replace the needed parts for HitchBOT, we’ll be happy to do so,” executive director for the blog “The Hacktory,” Georgia Guthrie wrote.

Guthrie went on to say they understand if the HitchBOT team turns them down, and they may even build their own robot to finish out the experiment as a show of good faith. Many other members of the Philadelphia robotics and technology community offered their assistance, as well. The creators have seen an influx of builders and robotics hobbyists volunteering parts, time, etc., to help get HitchBOT back on his journey.

The creators of HitchBOT were not clear on his future, however. They haven’t decided whether a new HitchBOT 2.0 would be built or if they’ve already gathered what they wanted from the experiment. “As researchers, we wanted to know ‘can robots trust humans,’” commented Dr. Smith. It was an interesting concept, one that reverses the stereotypical, “will robots be our friends when they have AI” idea. “We’ve learned a lot about human empathy and trust. Everything we’ve learned will be borne out in the resulting research and in future planning HitchBOT’s adventures.”

Dr. Smith stated that there were multiple routes that could be explored with the robot: rebuilding, retiring, or maybe sending it to schools and allowing them to devise explorations for him as he travels — like a robotic Flat Stanley.

Although the future is unknown, one thing is for sure: While he was exploring, he showed that nearly all humans are willing to assist someone in need. He was the size of a small child and unable to walk. When he needed help traveling, people stopped, loaded him into the car, and took him as far as they could.

HitchBOT may be broken now, but his spirit and message will continue to live on and resonate for many generations to come.  SV