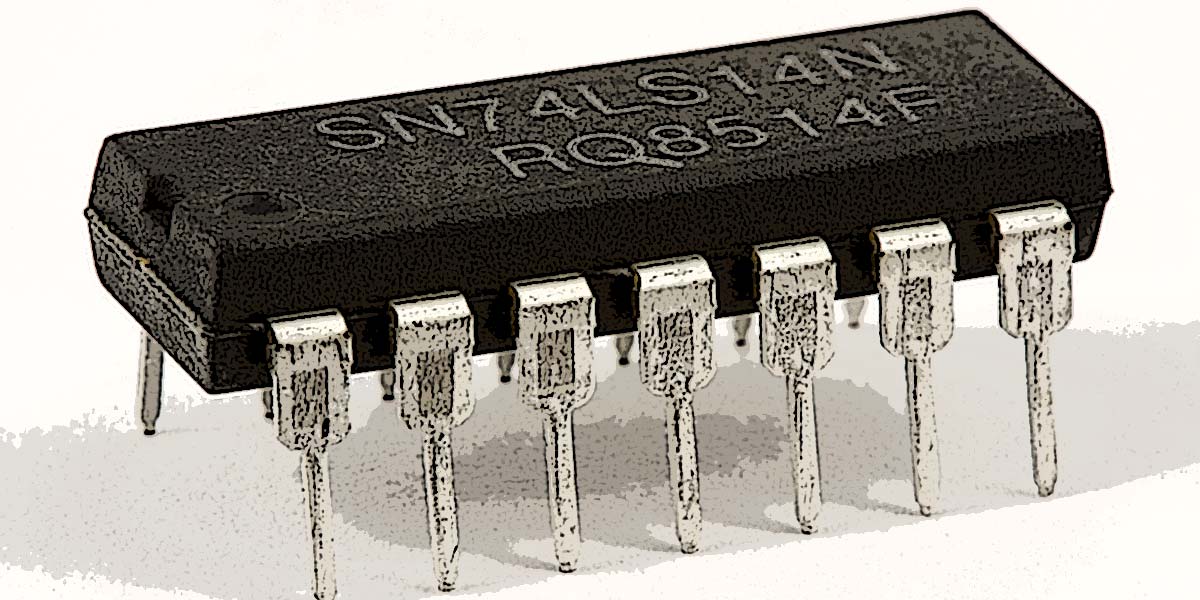 The Schmitt Trigger and How It Works

The Schmitt trigger is one of the most widely used circuits in the electronics industry. If you have to clean up a noisy signal, catch a slow rising voltage at specific points, or need to eliminate unwanted triggering in your robot line follower circuit, then the Schmitt trigger is the right tool for the job. 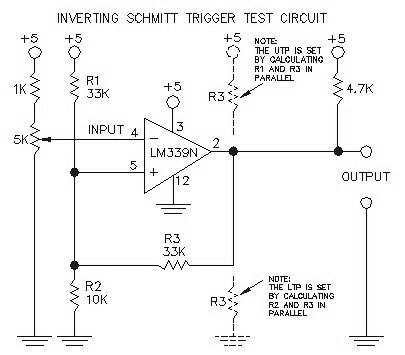 The nice thing about Schmitt trigger circuits is the fact that you can set up two voltage level trigger points — each of which can be selected simply by adjusting a few resistor values.

Let’s assume the input voltage level on the inverting terminal (pin 4) in Figure 1 is 0V. That means the output voltage (pin 2) is +5 volts. Remember I said that resistors R1 and R2 in Figure 1 form a voltage divider circuit? Well, with the output at +5V, R3 (at pin 2) is “seeing” 5V, and is technically in parallel with R1.

If we use the voltage divider formula, we can calculate the UTP as shown: 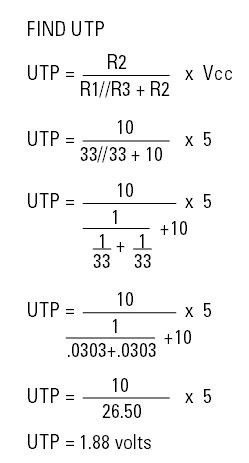 Now that we have the UTP set to 1.88V, the input signal voltage must rise above this point in order for the output voltage of the comparator to swing to the opposite level (zero volts).

Okay, what happens when the input signal goes above 1.88V and output swings low? Well, R3 now sees 0V at pin 2 and it is essentially tied to ground. This, in turn, makes R2 in parallel with R3. Again, we use the voltage divider circuit formula to determine the LTP:

This means that any input signal into the comparator will not affect the output voltage of the comparator until it has risen above the UTP or fallen below the LTP. Figure 2 shows just how this works. 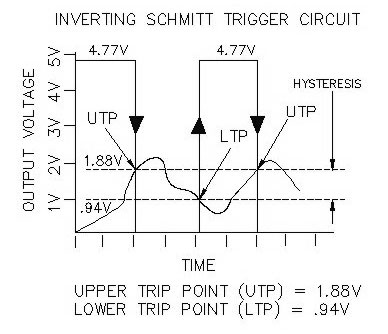 Again, let’s assume we have 0V at the negative input terminal (pin 4) and +5V at the output terminal (pin 2). Now, we apply a slow rising signal (0V to 5V) into the inverting terminal. Once the voltage rises a little above 1.88V, the output voltage of the comparator will swing negative (0V). This causes R2 and R3 to be in parallel and this, in turn, sets up the LTP.

You’ll notice in Figure 2 a “voltage gap” between the 1.88 volts and .94 volts. This narrow channel is commonly referred to as a “hysteresis” gap (i.e., UTP minus LTP). It serves as a “band gap” or dead zone for ignoring any input signals which fall into its constraints. The selection of resistors R1, R2, and R3 determines the hysteresis gap.

I set up a test circuit (refer to Figure 1 again) using an LM339N IC and made a chart of the inputs and outputs of the comparator in order to show you how the UTP and LTP actually work. Figure 3 shows the results of the test. 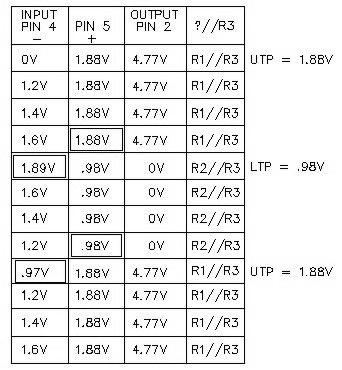 As you can see, the chart reveals a simple fact about how the Schmitt trigger comparator circuit works.

The input signal voltage has absolutely no effect on the output voltage of the comparator — at least not until the signal reaches one or the other predetermined set points (UTP or LTP).

So, to sum this up, there are two key points to remember about the Schmitt trigger circuit:

I hope this helps to clear up any confusion you might have about the Schmitt trigger comparator circuit.

Okay, now that you’ve got a handle on how the Schmitt trigger works, let’s take a look at a real world application. Figure 4 is a simple circuit you can wire together to control a single axis (east to west) motorized solar panel that tracks the sun as it moves across the sky. 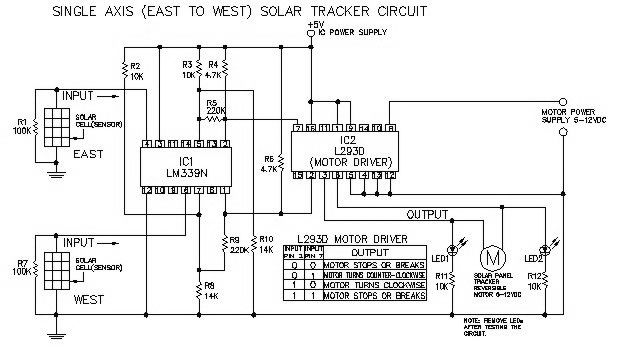 What the circuit will do is detect the amount of sunlight shining onto two small (14 mm x 35 mm) solar cells. The solar cell (i.e., sensor) receiving the most light will trip one of the two Schmitt trigger comparators (IC1). The UTP and LTPs on each Schmitt trigger requires two different levels of sunlight be present at each sensor before the circuit will respond. Now, when any one of the two comparators trip, it will set up a 5V, 0V or 0V, 5V situation at the two input pins (2, 7) of the motor driver IC (IC2).

These two input pins control which direction (CW or CCW) the solar panel motor will turn (see the chart in Figure 4). Also, any time both sensors receive an equal amount of sunlight or shade, the Schmitt trigger output pins 1 and 2 will present the L293D input pins with a 5V, 5V or 0V, 0V, and immediately shut the motor off.

In other words, we don’t want the solar panel moving when it’s aiming directly at the sun (i.e., correct alignment) or when the sun isn’t shining.

For example, let’s say the solar panel is facing straight up (12 noon) and the sun is just rising in the east (see Figure 5). 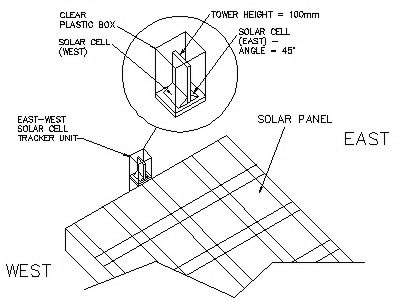 That’s nice and all, but what happens to the circuit when the sun is playing peek-a-boo with the clouds? Does the motor just keep oscillating between on and off? No! It’s not how rapidly the sun appears or disappears that affects the circuit; it’s whether or not there’s an imbalance in the amount of sunlight striking the two sensors.

The only time the sun can activate the motor is when the sun changes its position in the sky (i.e., sun light imbalance between sensors). The fact that the sun moves across the sky by one degree of arc every four minutes (15° hr) means it takes at least four minutes before the circuit senses any change in the sun’s position.

This four minute delay is what stops the circuit from cycling the motor on and off every few seconds as the sun plays its game.

Well, there you have it. A practical application for the Schmitt trigger. Now, how can you put it to use in your next robot project?  SV

On a side note, I was asked by the editor, Bryan Bergeron, “Why not hook up an Arduino or PIC microcontroller, and simply use a software defined Schmitt trigger?” Well, of course, that’s an acceptable alternative to soldering a bunch of components together.

I do love to code, however, there are times when buying a 50 cent comparator chip and adding four resistors beats using a microcontroller and spending hours creating and debugging 50 lines of code.

As they used to say, “Whatever rings your bell!”