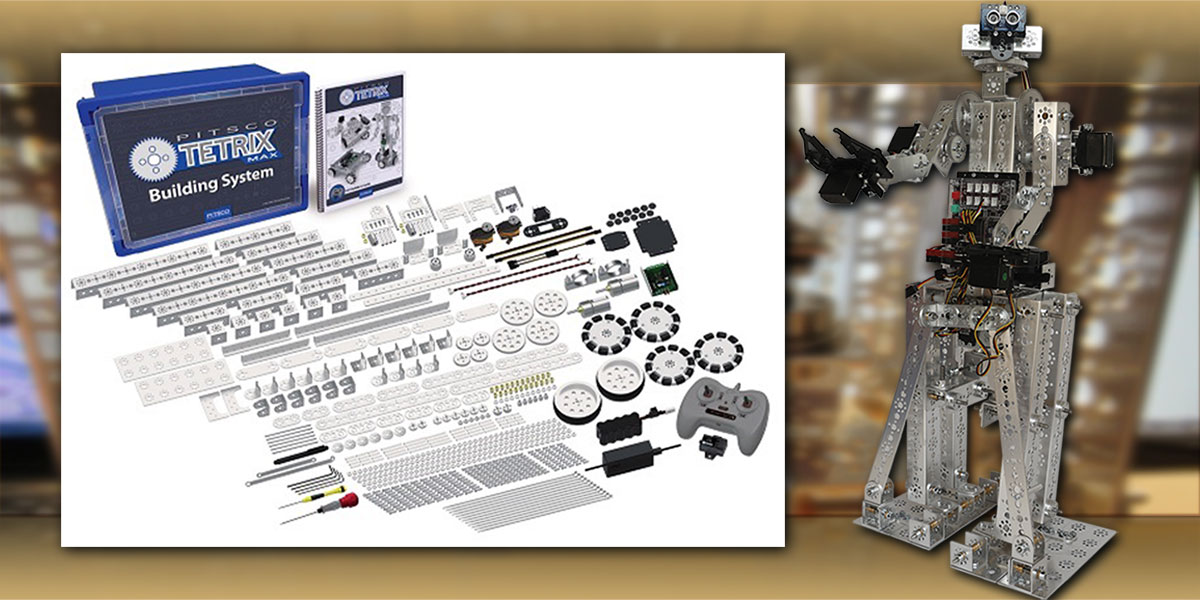 A Walking Robot Made from PITSCO/TETRIX MAX Parts

This is a project I did for the sheer fun and challenge of it. I have made smaller two-legged walkers in the past; one of my own design from Minds-i parts and the Parallax Toddler. Using TETRIX MAX parts, I could make a very large impressive looking two-legged walker. It was a challenge!

The basic design for this type of walker comes from an old-time robot created in the UK called Bigfoot. I was originally inspired to do these two-legged walkers after getting the Toddler. Parallax does not make the Toddler robot anymore, but there are a lot of them still available on eBay. 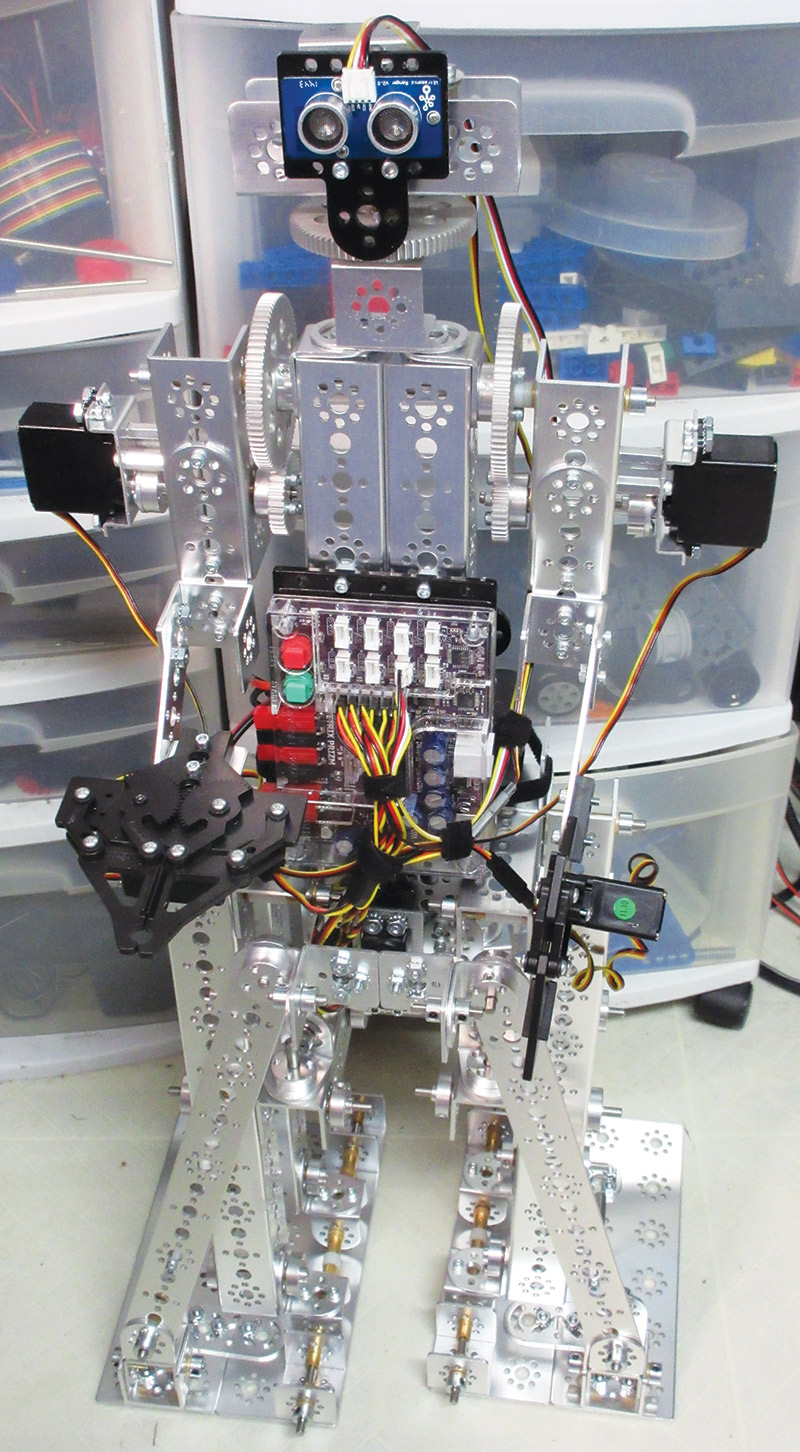 The hardest part was going to be the feet, so I started there. The robot must be able to tilt its body to one side and lift its other foot off the floor so it can move the foot forward. 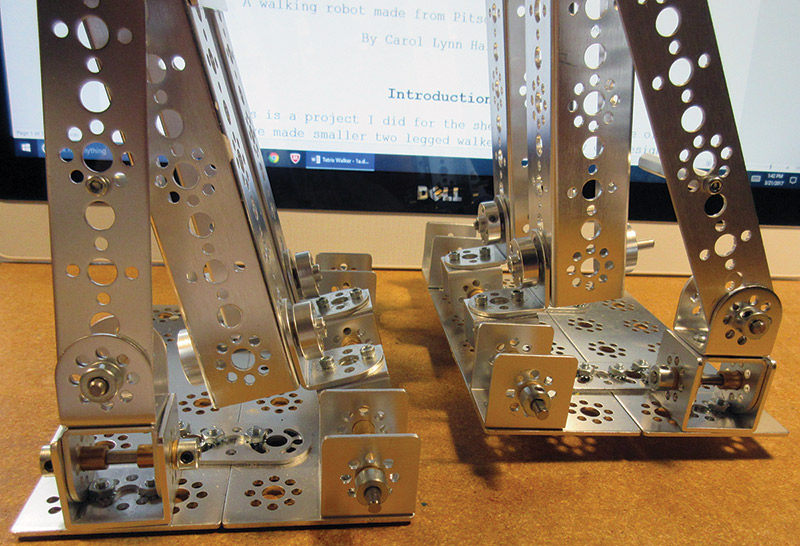 The foot must stay level with the floor, so the ankles on the robot need to have movement in three directions, yet be strong enough to hold the robot steady while balanced on one foot.

I put hubs on the bottom of the legs to allow for the lateral movement to keep the feet level when the legs move forward and backwards. Mounting the hubs on a long axle gave me the rotation needed for the body tilt to shift the robot’s weight. All of these are then attached to the foot plates which make the feet. 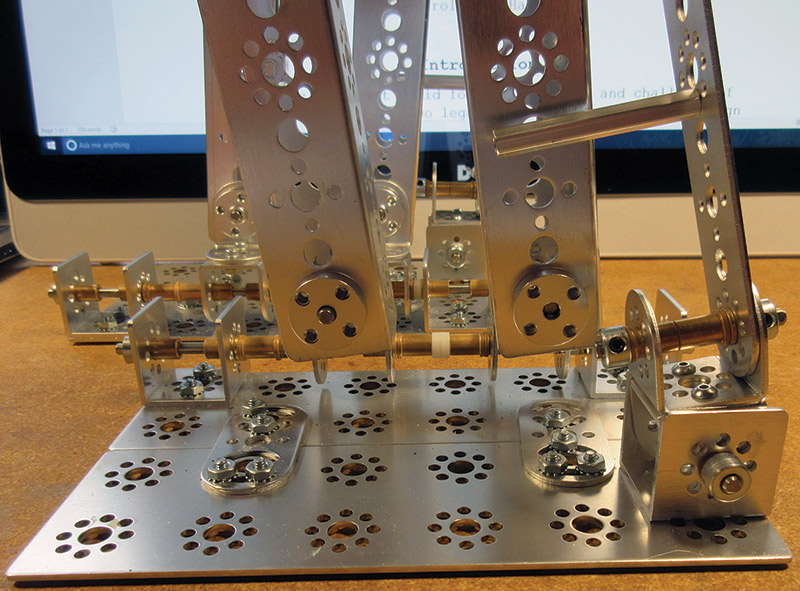 About halfway between the feet and hips are crossbars on the legs to attach to the servo to move the legs back and forth. These also need to be able to stay level when the legs move, so they are attached with rotating hubs. 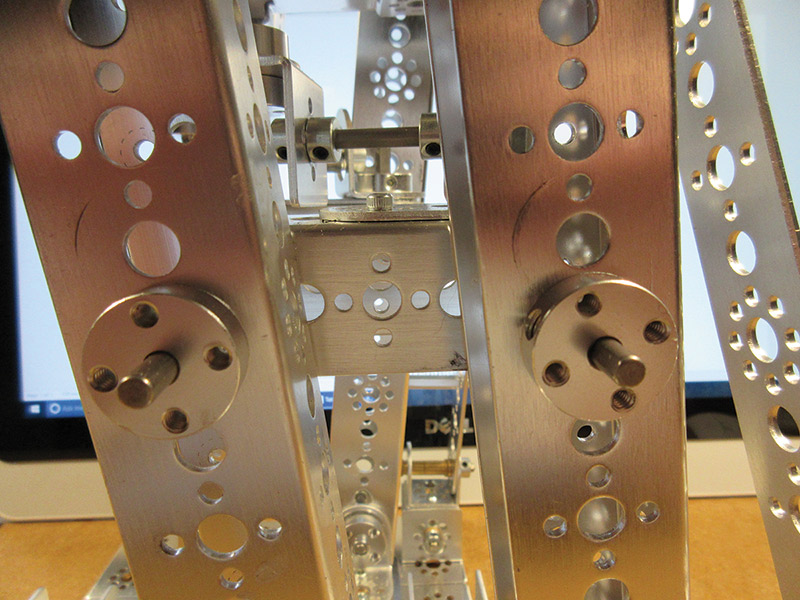 The servo for moving the legs back and forth is mounted to the bottom of the body between the hips, and has a crossbar connected to the servo horn which moves back and forth attached to crossbars on the legs. The bars which move the legs are slightly canted together at the back to increase torque. 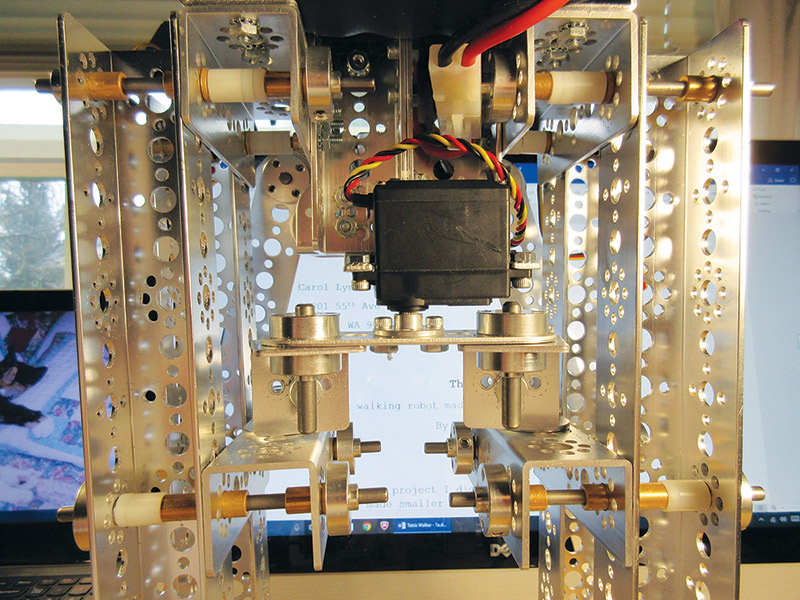 The legs are then attached with rotating hubs to the hips which keep them level when the legs are moving back and forth. 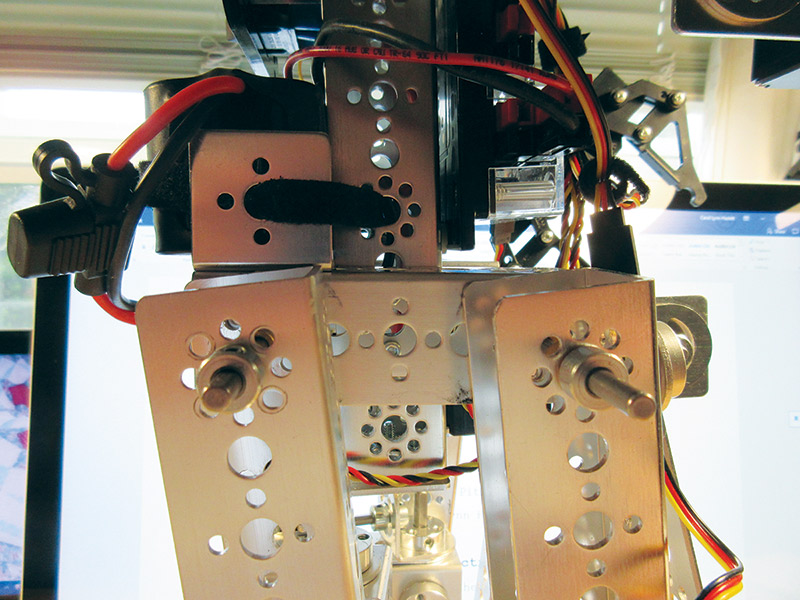 The body is secured to the inside of the hips and slightly canted backward to help with the balance of the robot. I put the battery pack on the back for the same reason. With the arms and grippers up front, the robot needs the added weight in the rear. 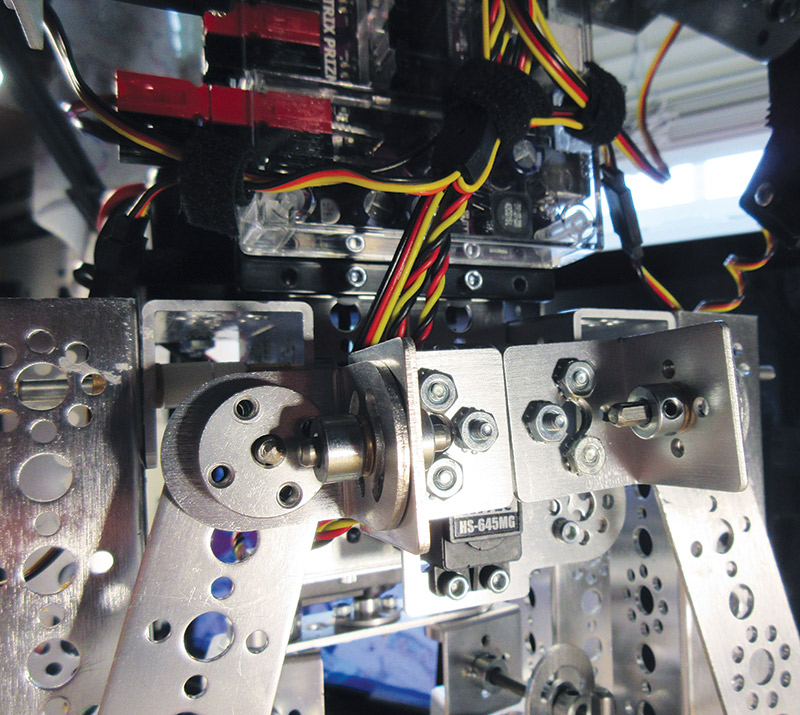 TETRIX MAX has a humanoid type robot with a moveable arm, but I decided to build my arms differently so they were closer inboard to the body; again, to help with balance. I tried the other way first, but the robot was too tippy.

Almost everything on this robot was remade and redesigned many times!

To tilt the body, there is a servo on the front of the robot attached to the lower part of the body that pulls up the foot on one side to make the robot lean over. The balance here is very crucial and once I had the build of the robot balanced overall, the speed and angle of the servo decides the balance point.

One of the more difficult parameters to determine was the servo speed. If it pulled up too fast, the momentum would tip the robot right over. If it was too slow, it would not lift the foot high enough to get it off the floor. Getting the right angle for that servo was just a matter of trial and error. Of course, if I changed one thing I had to change everything.

The walk sequence is easy: lean right, left foot forward; lean left, right foot forward. Between the mechanics and refining the program, it took many tries to get it right.

I added a servo to the head to make the robot capable of picking an open path for itself. When it encounters an obstacle, it swivels its head and based on the servo position where it sees an open path, it turns in that direction and then walks forward. If it cannot see an opening (such as walking into a corner), it will turn around 180 degrees and head out of where it is. 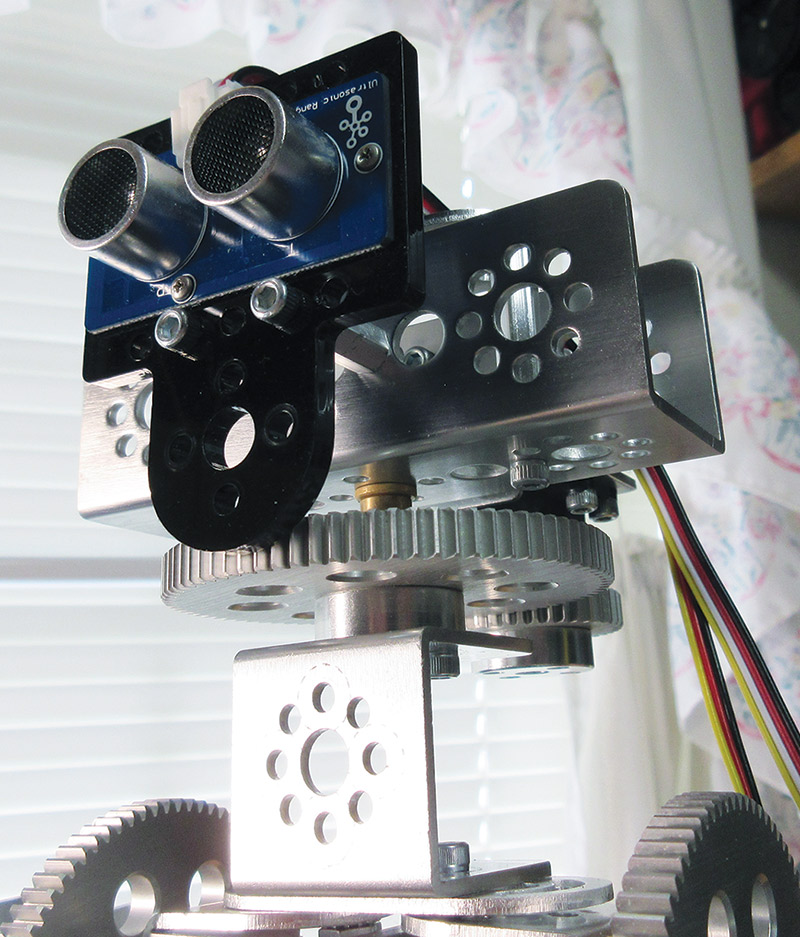 This behavior gives it a more appealing look that seems as if it is actively thinking on its own. The servo is programmed for five positions: left, mid left, center, mid right, and right. When the Parallax Ping))) sensor sees an open path, the servo’s position is fed back to the microcontroller and the proper turn is picked from the subroutines. This is where a lot of the work for this robot comes in: all the programming and part tweaking to make reliable turns and moves.

I have not decided yet what to do with the grippers and movable arms, but for now they add a lot of charm to the robot. 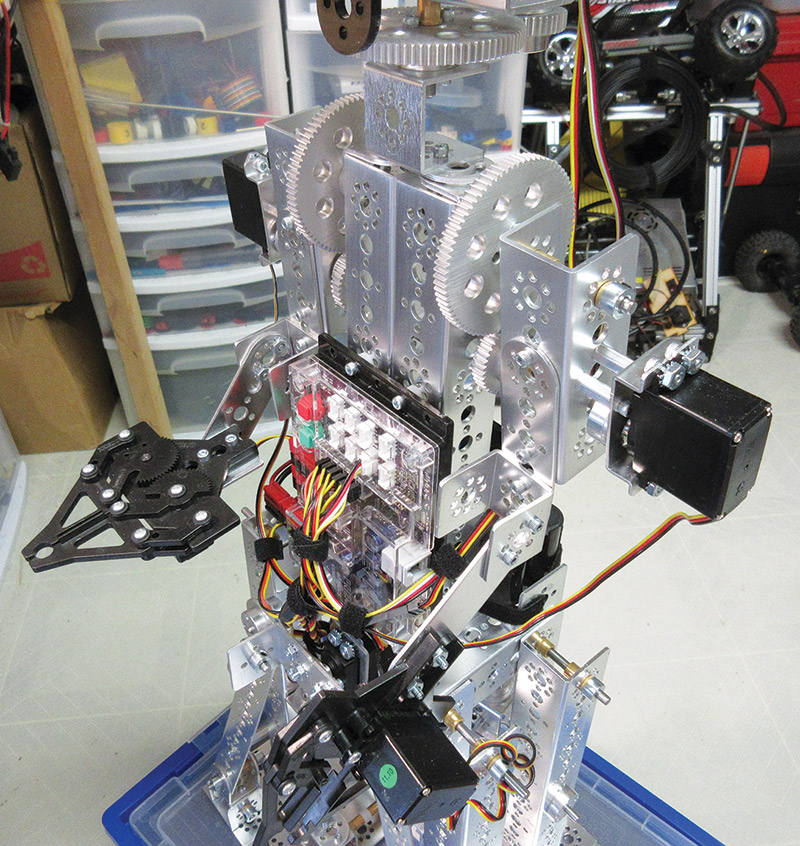 Close-up of arms and grippers. 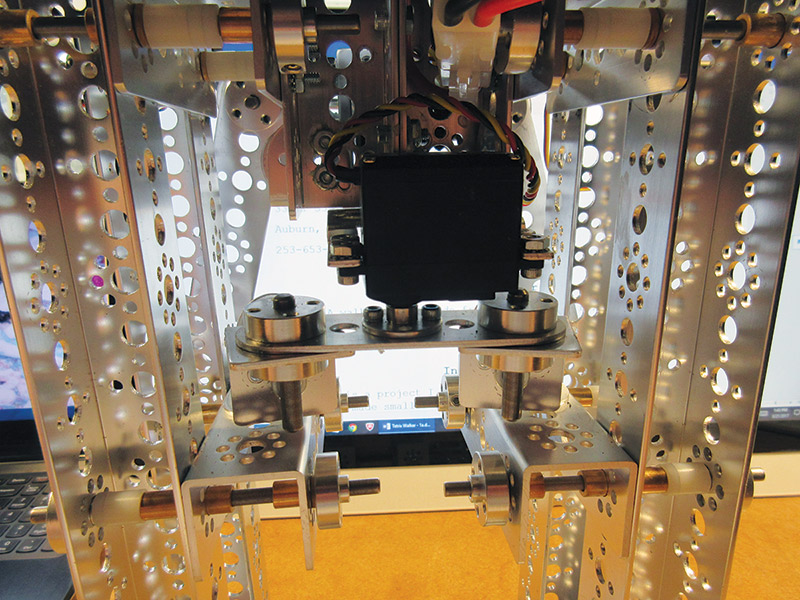 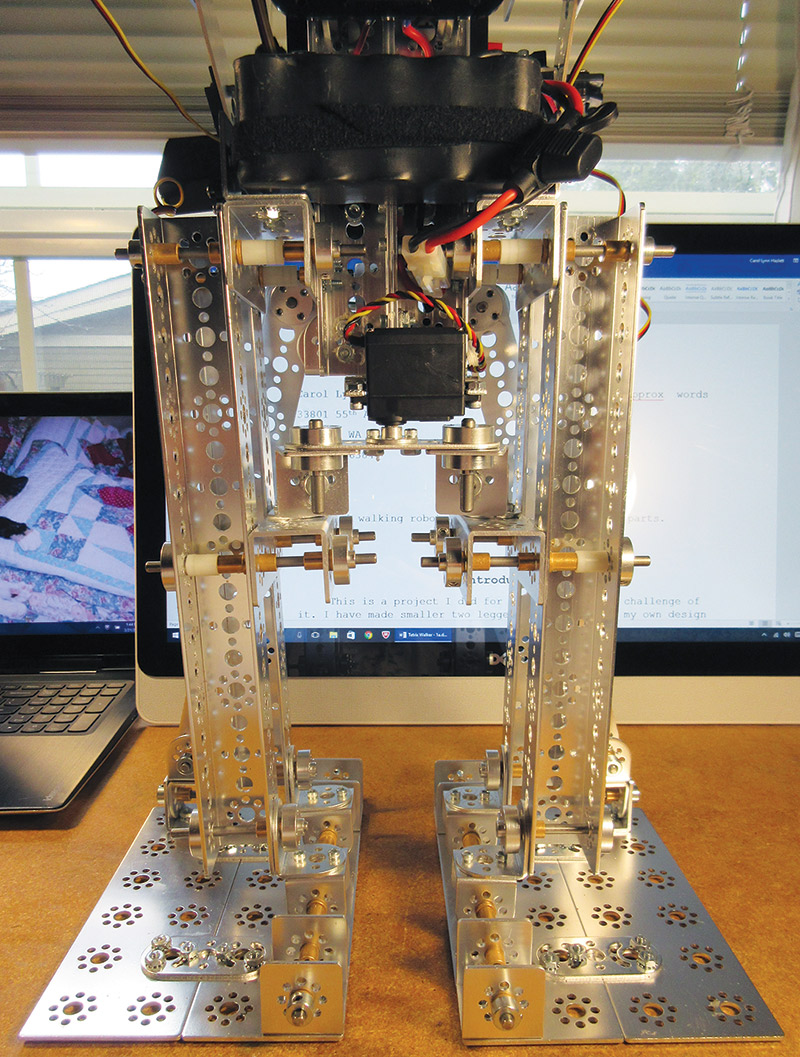 Does this make my butt look big?

The TETRIX MAX kit I have uses the Prizm controller made by PITSCO. It is based on the Arduino Uno and has a library of its own. It is simple to set up and use.

Plus, since so many of us have used Arduinos, the learning curve is very easy.

The Prizm does have its own set of commands for the servos and sensors, but I found them to be very easy to use and quite intuitive. It is a little easier to program this robot than using straight Arduino C. The only drawback is I would have liked to be able to program it wirelessly.

There are several videos of it on my YouTube channel and my Facebook page. It is hard to describe all the various joints and mechanisms on this robot in words, and still pictures can be confusing to try and figure out what you are looking at. So, I definitely recommend you view the videos of it.

This has been a very rewarding and enlightening project which I both enjoyed tremendously and am glad it is completed. Whew!  SV