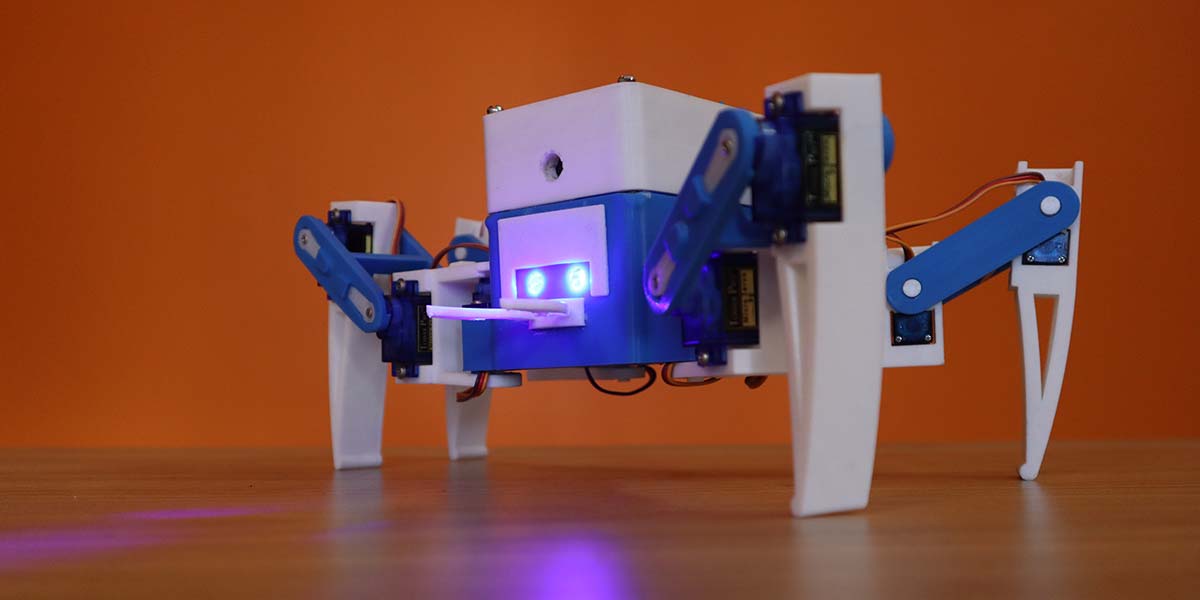 SPY-DER is a surveillance robot. Not just any robot, but one that can walk like a spider and work as a spy using its camera at the same time. Hence, the name SPY-DER.

SPY-DER could be controlled manually using voice commands as well as through a web based control interface. Technologies like hotword or wakeword detection ensure a simple call to its nickname “Bumblebee” will activate its voice command mechanism, where as speech recognition ensures the robot understands the commands.

Along with speech recognition, intent detection provides the ability of giving the same command in different ways, i.e., “wave your hands” or “say hello.” Both commands will make the robot wave its legs. Moreover, one can simply open a particular URL using any browser and access the web based control interface of SPY-DER. The interface contains several functional buttons which could be used to control the robot. Using another URL, a user can watch the live video feed from SPY-DER.

To build this project, the following hardware components are required:

At first, SPY-DER was a simple Bluetooth-controlled spider robot built using an Arduino Nano which could be controlled using an Android/IOS application. This was cool but not that impressive. Integrating speech recognition, web control, and surveillance was a big challenge.

Implementing all these features onto a single Arduino board was not feasible and demanded a more powerful machine. So, a Raspberry Pi Zero became the new computing device for SPY-DER. All the features could be integrated together using the Raspberry Pi Zero but the whole spider movement control code had to be rewritten in Raspberry Pi.

This can be cumbersome, so the RaspPi was connected to the Nano through serial communication. The Raspberry Pi controls the Arduino which, in turn, controls the spider robot’s movements with just a few simple modifications to the previous code.

All the codes for this project are written in Python for the Raspberry Pi. As for the web based control interface, the webpage was built using HTML, CSS, and jQuery using the Flask framework. The RPi-Cam-Web-Interface (https://elinux.org/RPi-Cam-Web-Interface) is used for live video streaming since the latency is very low.

Modified code of Picovoice (https://picovoice.ai/) is used for speech recognition and hotword detection. As the RAM and processing power is very limited with a RaspPi Zero, the accuracy results using local speech recognition systems weren’t that great, plus the latency was very high.

A few modifications were undertaken on an existing robot design (Figure 1). 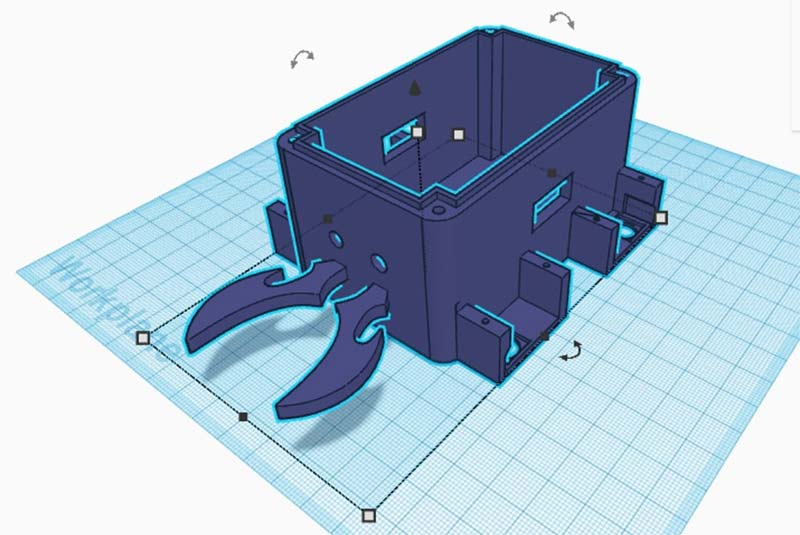 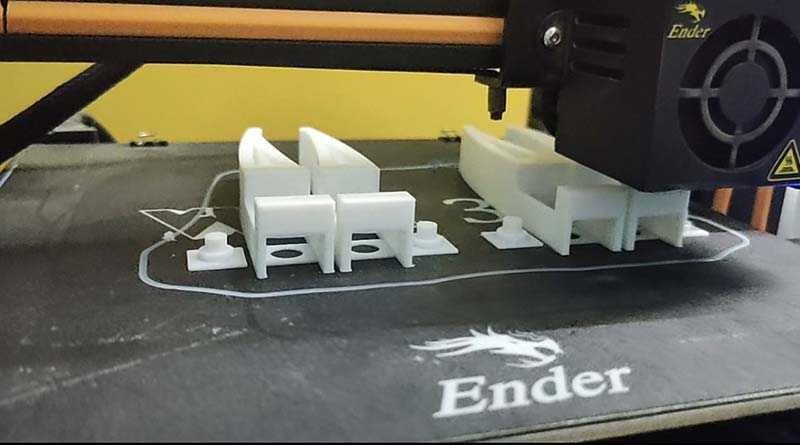 After 3D printing the parts, SG90 servo motors were attached to them accordingly (Figure 3). 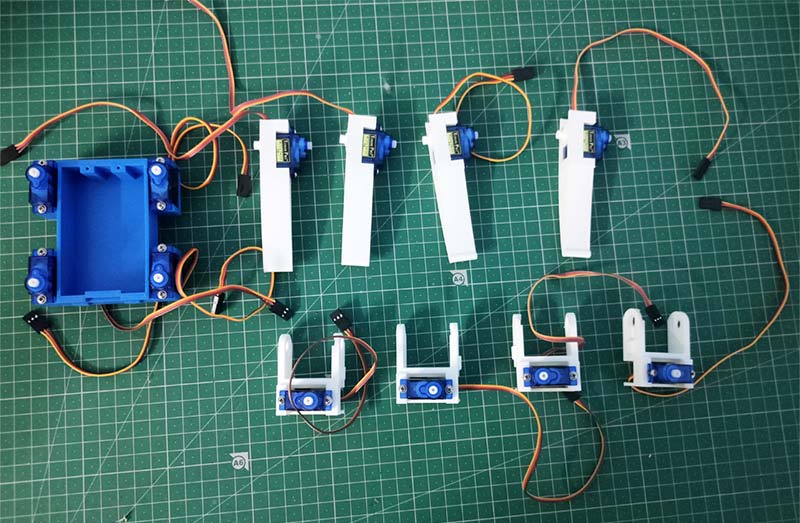 Connecting All the Body Parts Together

All the 3D printed parts were assembled together through the servo motors. Take a look at Figure 4 and Figure 5. 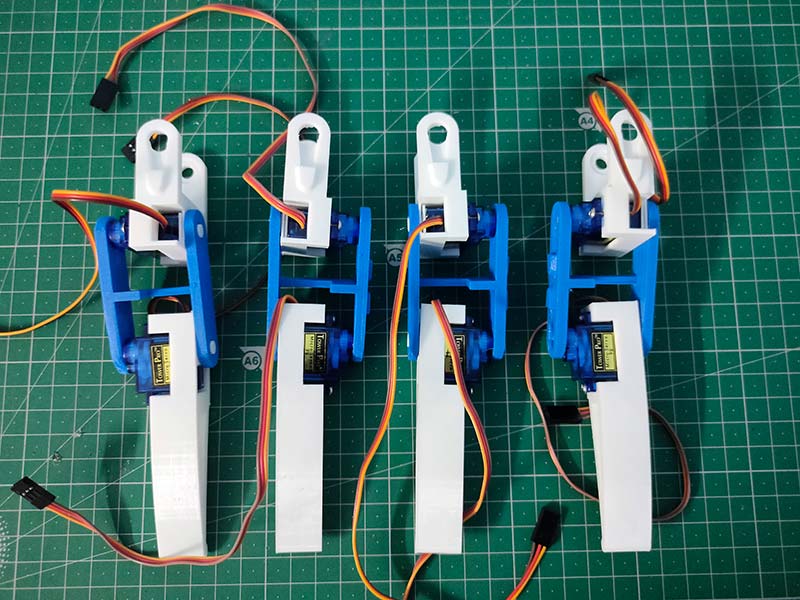 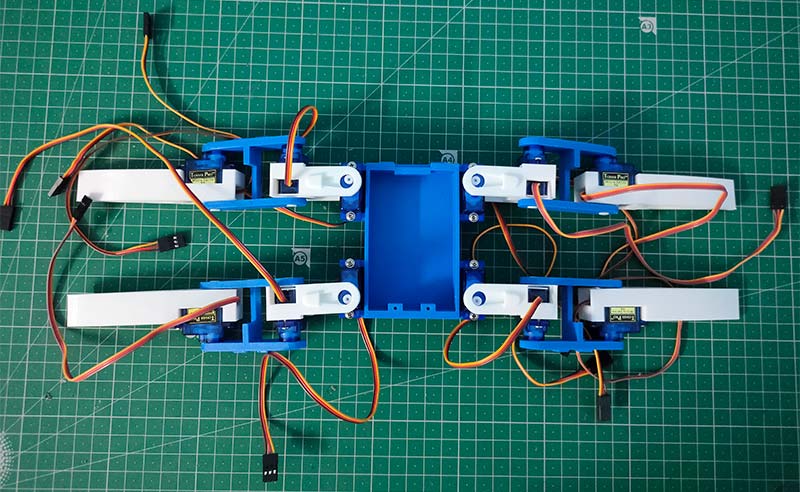 The battery management system and two lithium-ion batteries connected in series were attached to the robot, which provided 7-8 volts (Figure 6 and Figure 7). 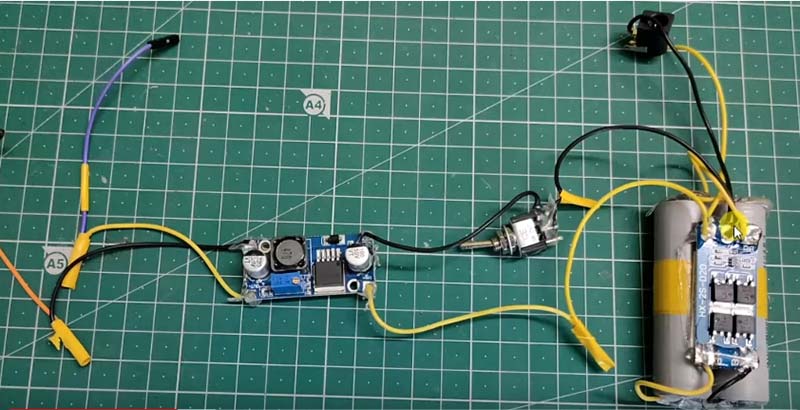 Figure 7: Battery and BMS attached in the body.

An LM2596 buck converter was used to reduce the voltage to five volts to provide power to the Arduino, servo motors, and the RaspPi.

Connecting the Arduino in the Robot

The Arduino Nano is connected to the IO shield along with all the servo motors. Special precaution must be taken while connecting servo motors to their designated positions as per the servo numbering figure and the circuit diagram. Refer to Figures 8, 9, and 10. 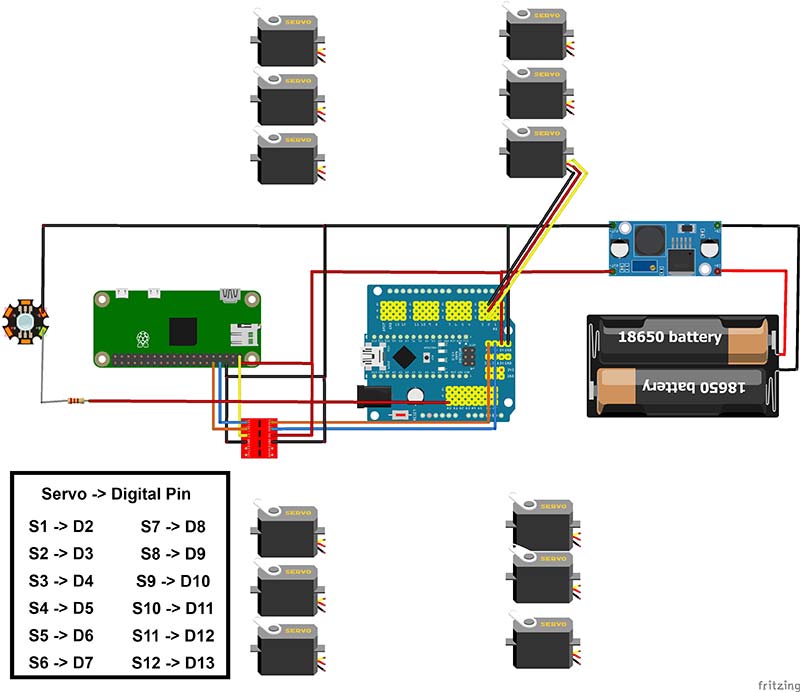 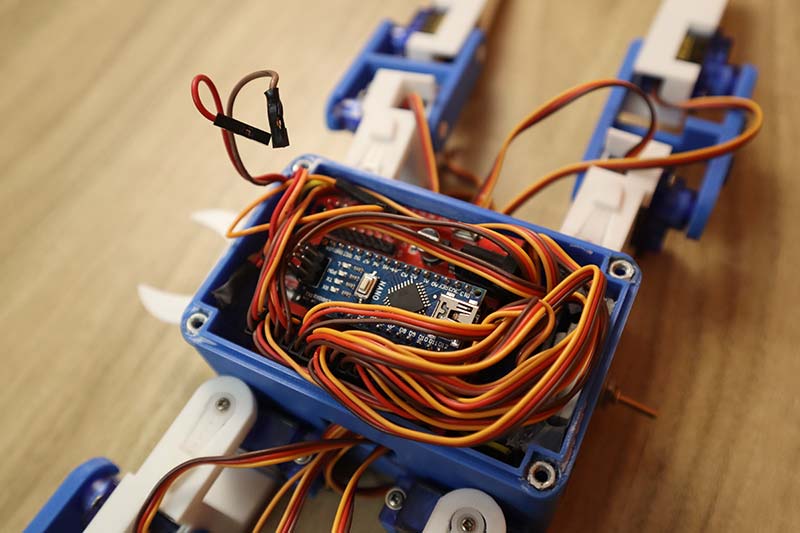 Figure 9: Arduino attached in the body.

Uploading Code to the Arduino

The code available in folder “Program1” can be used to validate the basic robot movement functions like forward, backward, right, left, etc. Go to https://www.youtube.com/watch?v=fnMmnd9k6q8 to learn more.

Lastly, the final code for the Arduino which will work with the Raspberry Pi (SPY-DER_Arduino.ino) file was uploaded to Arduino. You will find this code in the downloads as well. You can also go to https://github.com/Arijit1080/SPY-DER-A-Speech-and-Web-Controlled-Surveillance-Spider-Robot-using-Raspberry-Pi-and-Arduino.

Connecting the Raspberry Pi with the Arduino

The logic level shifter was then attached to the Arduino to connect the Arduino and RaspPi serially (Figure 12). 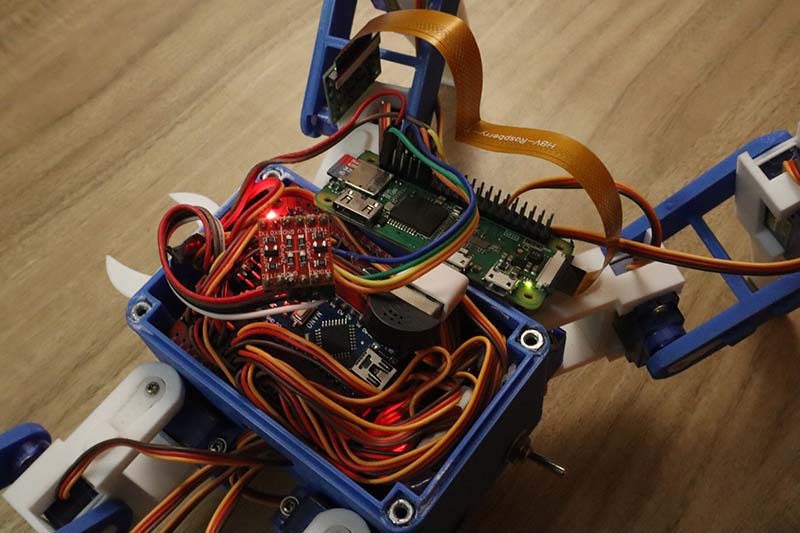 To set up the RaspPi, install all the required libraries and upload the codes available in the downloads. The mic and camera connection are to be tested herein.

Next, we need to clone the PicoVoice repository (in the downloads) and the required changes to that code.

For the web-control part, the required Python and HTML files are available in the downloads as well.

To install RPi-Cam-Interface for the video-streaming part, refer to the video available at https://www.youtube.com/watch?v=yzpqEw1kEGo for assistance.

Next step is to train the Rhino speech-to-intent model (Figure 13) so that for a single task, different commands (i.e., “open your eyes” or “turn on lights”) could be used to make the robot turn on its LEDs.

For this, the Rhino speech-to-intent context model which is a part of PicoVoice must be trained from https://console.picovoice.ai/rhn. The model can then be downloaded and uploaded to the Raspberry Pi.

Figure 13 shows a glimpse of this model. 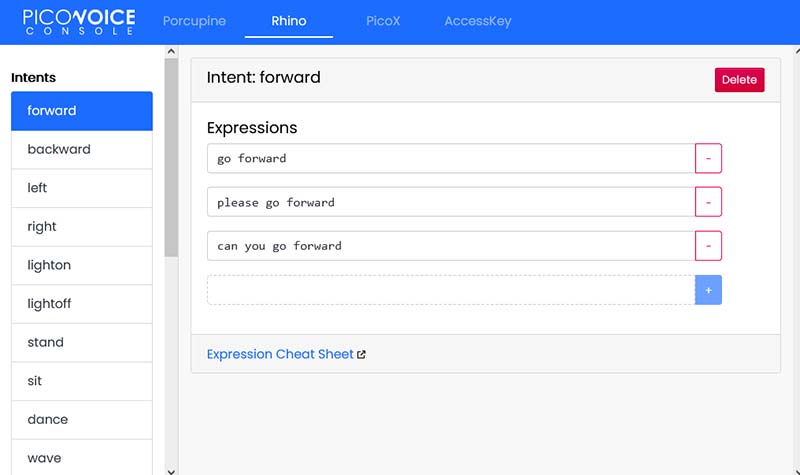 Figure 14 shows all the components connected.

The lid is finally closed after fitting everything inside the body (Figure 15).

Figure 15: After attaching the lid.

After the robot is complete, a few commands must be used for the Raspberry Pi to run the robot. To run the web control interface:

To run the speech control system:

Refer to the video at https://www.youtube.com/watch?v=KkZiZggtvIU if you need help on how to run the codes properly. To access the web-control interface from any browser (Figure 16), use Raspberry_pi_ip:5010. 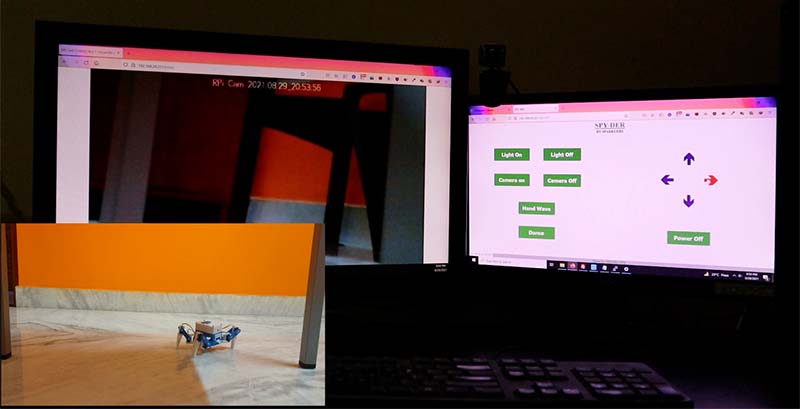 That wraps up my build for this project. Of course, there are many different ways that can be used to complete a project like this. Modifications like a local speech recognition system, using image processing, and AI based features for the camera could be done for this project as there is plenty of room for future improvements.  SV

Demo Video of this Project
https://youtu.be/3edXTxIZ_2U

Code for this Project
https://github.com/Arijit1080/SPY-DER-A-Speech-and-Web-Controlled-Surveillance-Spider-Robot-using-Raspberry-Pi-and-Arduino

Using the Camera with the Raspberry Pi Video
https://youtu.be/oo0A_yRrIxQ

What’s In The Zip?
Code/Necessary Files