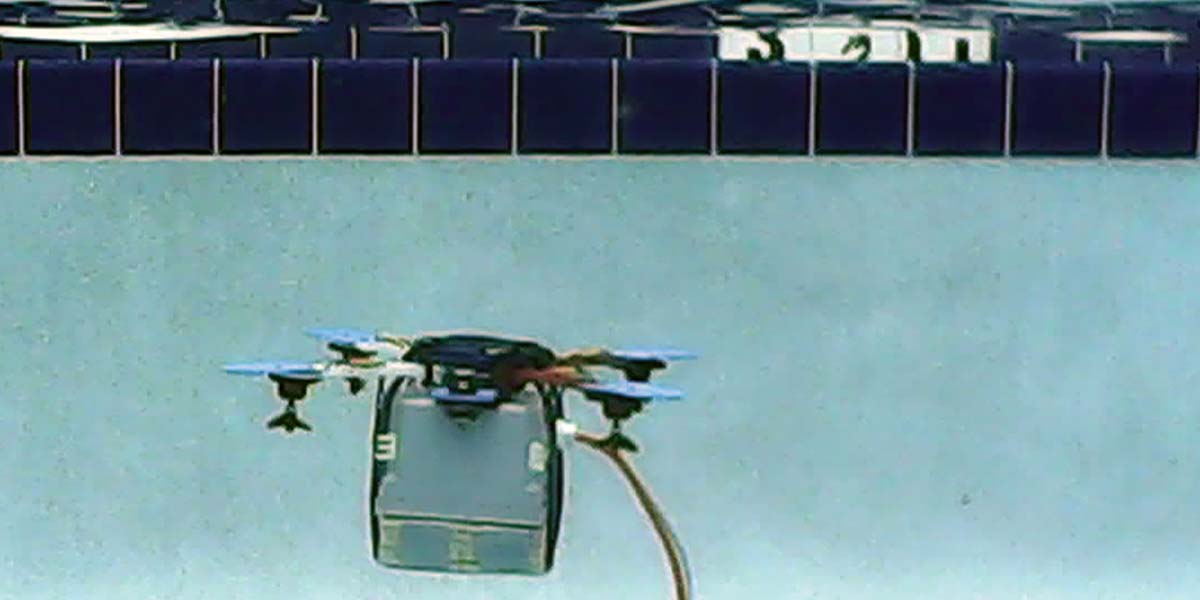 Make a Splash with an Underwater Quadcopter ROV — Part 2

We pick up our project this month with a description of the redesigned printed circuit board (PCB) that was produced to reduce its size, tidy up our circuit, and minimize the length of the signal lines.

After getting all the bugs worked out both in hardware and software, a new compact PCB was designed for a four inch box. This PCB (shown in Figure 1) contains all the original features of the prototype design with some additions mentioned in the "Thoughts on Improvements" section. 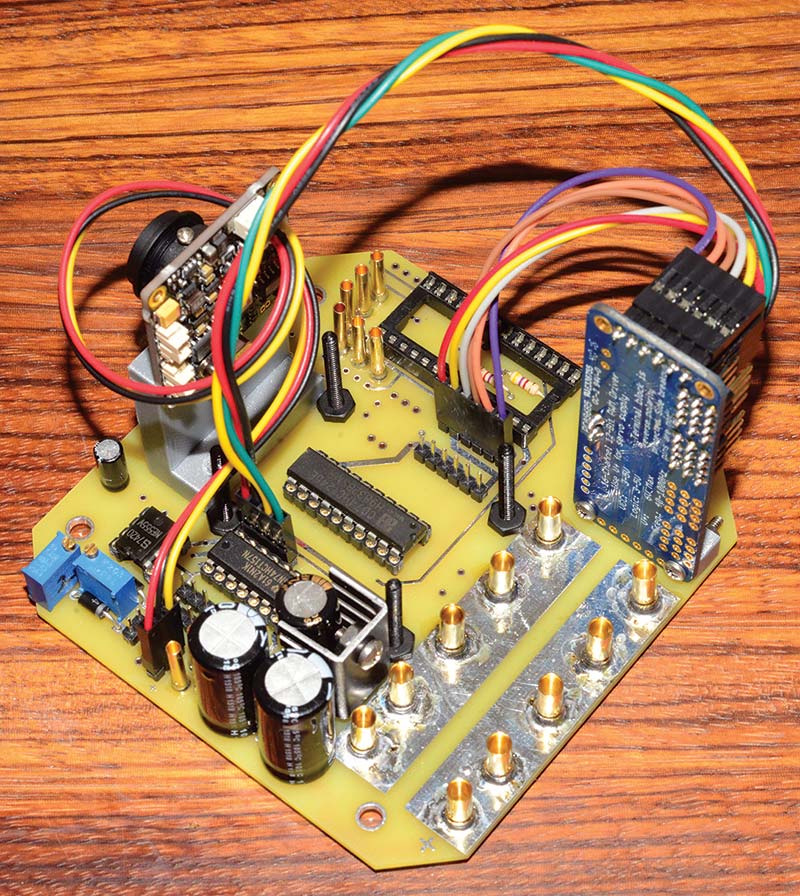 Figure 1. The four inch PCB with all components soldered and partially assembled.

This 3.8 inch square PCB can be installed in the 6 x 6 x 4 inch Cantex junction box as shown in Figure 2, but should also just fit into a 4 x 4 x 4 inch Cantex box when its corners are cut off. 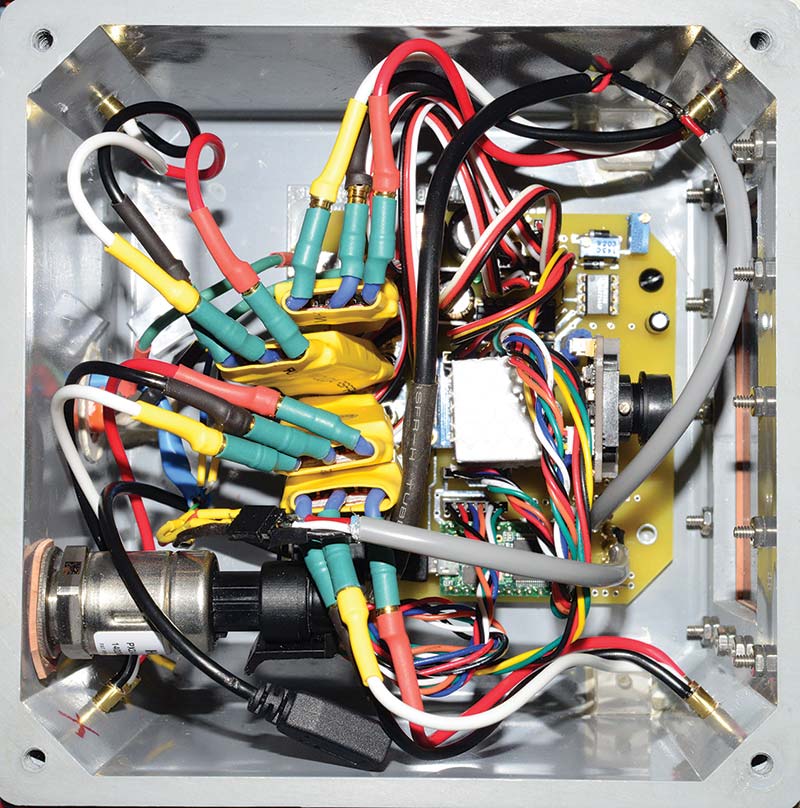 Wire placement will be a challenge in a 4 x 4 x 4 inch box. Be aware that there are other brands of these size junction boxes that look similar to the Cantex boxes, but their inside dimensions are smaller.

An ExpressPCB layout of this PCB is in the downloads for this article. It includes the part positions on the board. If you don’t already use ExpressPCB, it’s an easy matter to download their free software so you can read the layout and see the part positions.

Here are some important things to know about this PCB: 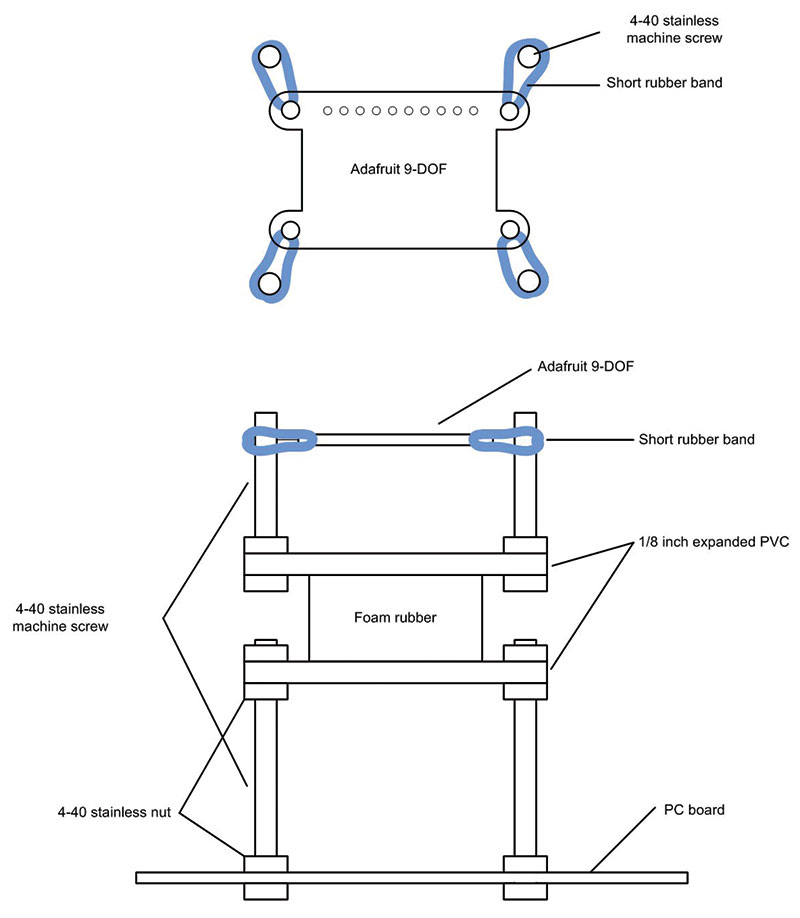 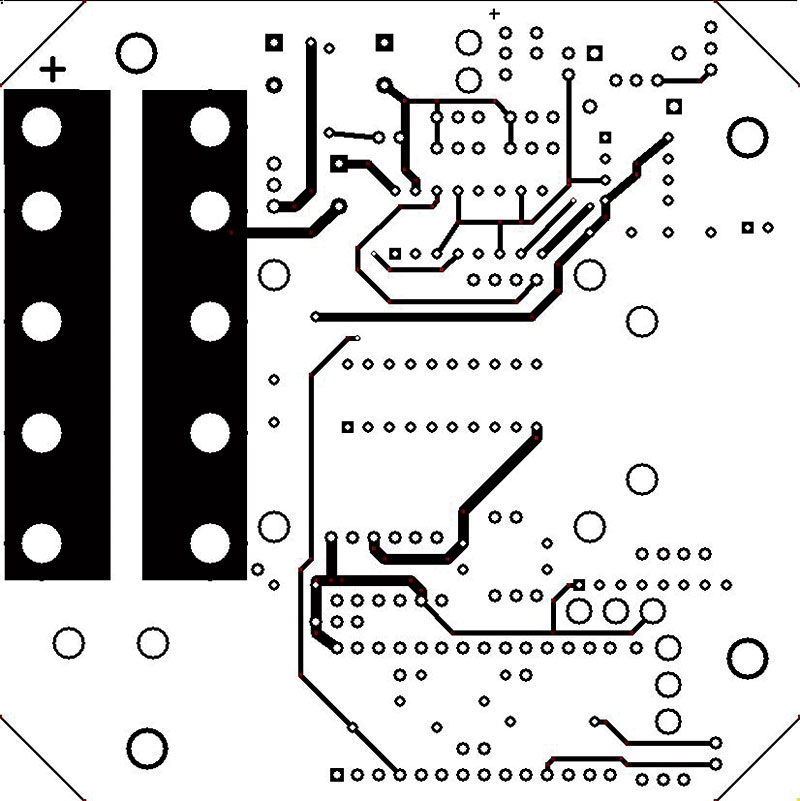 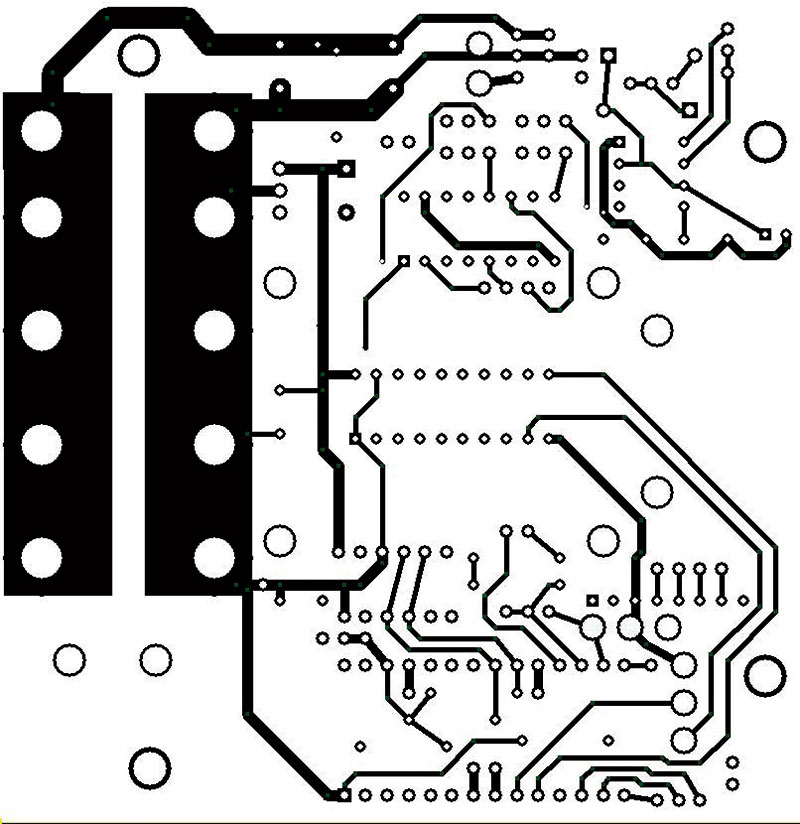 Quadcopters employ PID controllers in their software to implement the necessary fly-by-wire system. A quadcopter has four degrees of freedom — pitch, roll, yaw, and height — and the Quad_ROV replaces height with depth. It’s impossible for a human to smoothly control all four of these variables using two joysticks manually.

When the two joysticks are allowed to go to their neutral position, the Quad_ROV should hover in place with the software reading the sensors and maintaining equilibrium. PID stands for Proportional, Integral, and Derivative, and is basically a feedback loop system to insure that changes in the motor’s speed are done smoothly.

The cruise control in a car is operated by a PID mechanism. If your cruise control is set for 70 MPH and you slow to 45 MPH, when you re-engage the cruise control it rapidly accelerates up to 70 MPH. However, just before it gets to 70 MPH, it slows down the acceleration so that it will not overshoot the 70 MPH limit. This is the function of a PID controller.

For a full treatment of PID controllers, check out the Wikipedia article at https://en.wikipedia.org/wiki/PID_controller.

Another good reference is Chapter 7 in the book, Pro Arduino, by Rick Anderson and Dan Certvo, Apress, 2013.

Fortunately, we don’t have to write our own software for this complex algorithm. There is an Arduino library available that does this. It can be found at https://playground.arduino.cc/Code/PIDLibrary.

Using this library is pretty straightforward. Here’s a very basic example from the author of the library:

//turn the PID on
myPID.SetMode(AUTOMATIC);
}

The simple example above does not use the SetOutputLimits() method, which has default values of 0 and 255 for the minimum and maximum. Instead of 0, the minimum is set to –255 in the Quad_ROV controller software because our Setpoint values (the angles) will include negative values. The controller program also uses the SetSampleTime() method with a parameter of 10 milliseconds, which produces 100 Hz updates.

The direction parameter in the PID object is normally set to DIRECT. However, for the depth PID, this must be set to REVERSE. The motors will need to slow down to allow the depth to increase.

The challenge of getting a PID controller to work correctly involves setting the Kp, Ki, and Kd gains correctly. There are books written on this subject; however, the Wikipedia article has some good animations that help to clarify this subject.

Figure 4 is a basic flowchart of the software controlling the Quad_ROV. 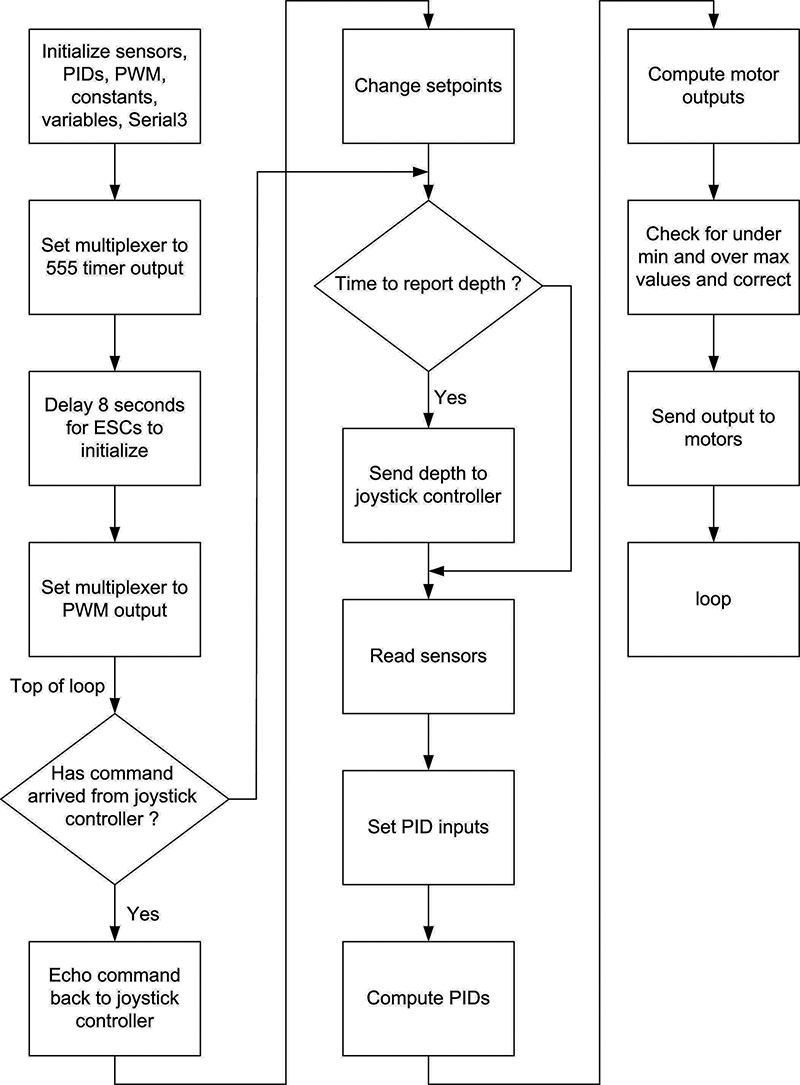 Figure 4. Flowchart of the controller software.

The complete software for both the Quad_ROV controller and the joystick controller is available in the downloads for this article.

Following are some of the more important software fragments from the controller program.

In Setup(), the ESCs need to initialize normally. First, the 74LS157 multiplexer is immediately set to send the 555 timer signal to the ESCs. Next, the Adafruit servo driver board is started and the minimum signal (minus a little) is output. It’s important that the MIN_SIGNAL value is set so that the motors will always be turning.

If MIN_SIGNAL allows the motors to turn off, the result will be an uncontrolled wobble of the Quad_ROV. This is because there is some inertia to overcome when the motors restart, causing a delay in response. After the ESCs have had a delay of eight seconds to start up, the multiplex signal is set low to allow the signals from the servo driver board to connect to the ESCs for normal operation:

delay(8000);
// Wait for ESCs to initialize
digitalWrite(MULTIPLEX, LOW);
// ESCs should be powered up so switch input

This next fragment shows the basics of the main loop().

The first section checks for any serial commands coming from the joystick controller. If something is received, it is first echoed back to the joystick controller to indicate it has been received correctly. Then, using the first character in the received string (which is a letter), it determines what setpoint must be changed, and with the extracted value changes that setpoint.

The values for the roll and pitch setpoints are multiplied by 2.0; this can be adjusted to determine how aggressive the roll and pitch will be. The yaw setpoint goes from 0 to 360 degrees, so overflow and underflow are dealt with if necessary.

The same is done for the depth setpoint which insures the Quad_ROV will not go below 50 feet:

The portion of the main loop() that actually controls the movement of the Quad_ROV is next.

The sensors are read from both the Adafruit 9-DOF and the pressure sensor, and then each value is sent to the smoothing functions.

These functions contain a circular buffer which averages the last 30 sensor reads. This helps in smoothing out the sensor values, which tend to vary slightly. With the new averaged sensor readings, the four PIDs compute a new output value. These values are then used to generate a new thrust value for each motor.

Note that the depthOutput is added to all four motors. If only the depth needs to be changed, these four motors will all run at the same speed, and increase or decrease their speed depending on whether the Quad_ROV needs to go up or down. With the rollOutput variables, the two motors on either the right or left are increased in speed while the opposite motors are decreased in speed. This will roll the Quad_ROV to the right or left.

The same happens with the pitch and yaw output values, but the + and - signs differ on specific motors to create the pitch or yaw motion. After the four motor values are computed, they are checked and truncated if needed to stay within our MIN_SIGNAL and MAX_SIGNAL limits.

Note that the divisor variable can be adjusted to change the overall thrust of the brushless motors. This may need to be adjusted depending on what motors and ESCs are used. The motor[] values are then sent to the motors by assigning them in the four servo driver pwm.setPWM() methods:

How do you view the live video signal produced by the small camera inside Quad_ROV? Here’s the simple method I use. There are several small video adapters available on Amazon or eBay that make this task easy.
Figure 5 shows the model I have. 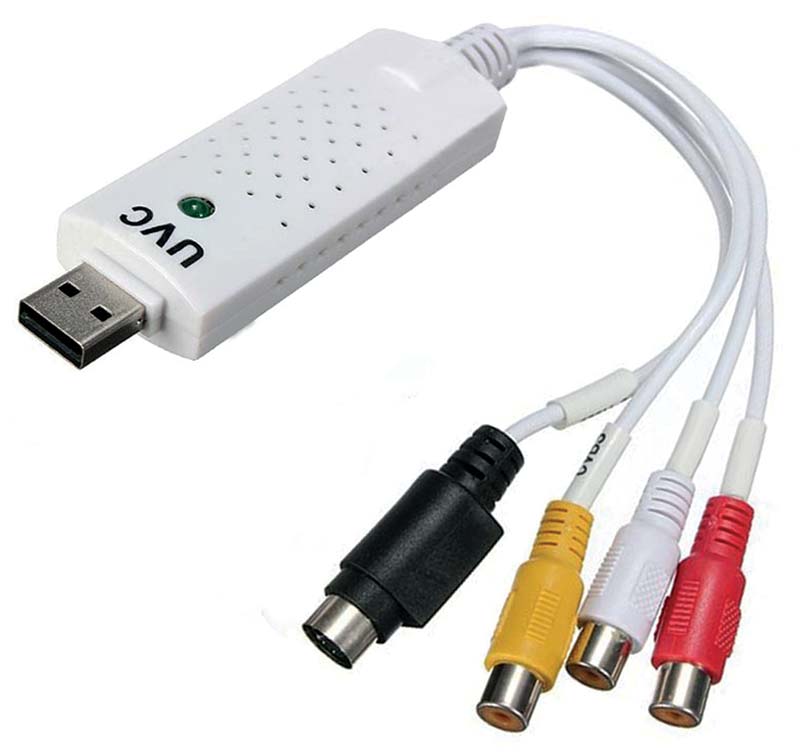 It came with a mini DVD containing software that not only displays the video signal, but will record it as well. The adapter plugs into a USB port on your laptop and the NTSC video signal from the Quad_ROV goes into the yellow RCA jack on the adapter. This model also has a red and white jack for audio, and a black jack for S-Video input, which are not used.

The Quad_ROV that I built is really a prototype. Here are some thoughts on changes I would make for improvements: