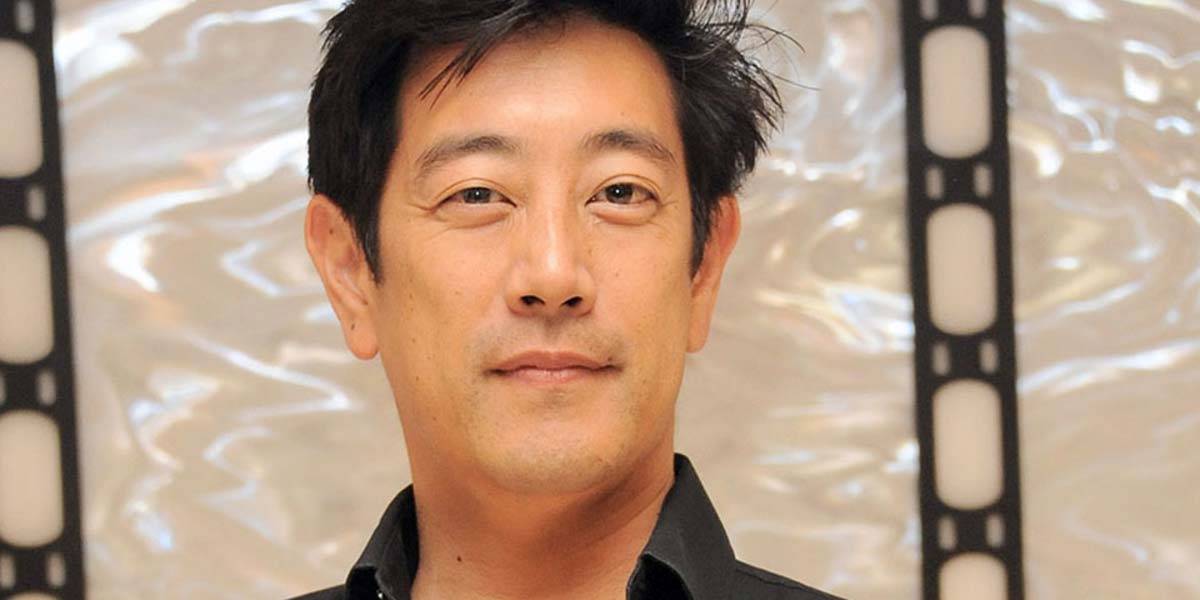 Whenever we talk about the famous, we call them “stars.” The dots of light in an otherwise black sky. However, stars aren’t the only things in the night sky. About once in our lifetime, we get to see something even bigger and more memorable — we are graced with a comet.

A comet isn’t just one point of light in the sky. It flies across the stars leaving a giant trail of lights. That was Grant. It wasn’t enough that he should be a dot in the sky. Everywhere he went, he made sure that there was a streak of countless glowing points following in his wake. Comets are rare and bring with them wonder and magic. You know they’re special the second you see them.

I first met Grant in 2000, and I knew he was special. We were just chatting about the nascent field of robots, and he listened to everything I had to say. He was one of the few people I’ve ever met that really cared about your opinions. He wasn’t just waiting for his turn to talk. He wanted to learn from you, about you, and what you could share with him. 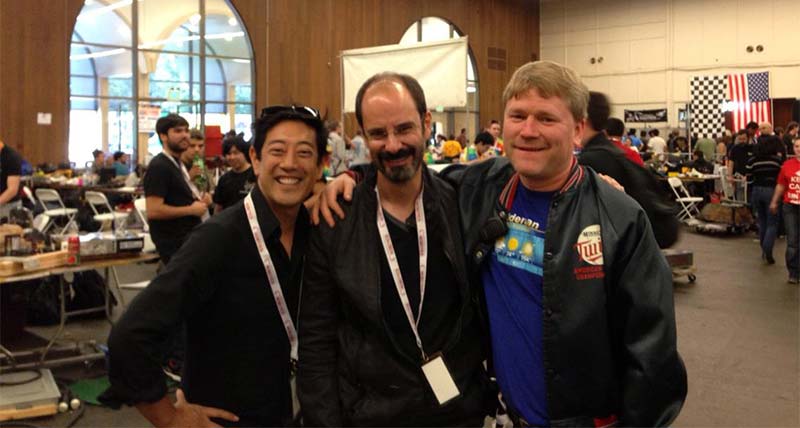 When he did talk, it was invariably about ideas or other people. Never himself. We bonded over a similar upbringing by single moms without a strong male influence. Which is an all too common thing. But Grant didn’t just discuss it casually. He was immensely grateful to his mother for her hard work in raising him, and he was forever talking her up. How many people actually talk about their moms and how important they are?

He was already living the dream, working at ILM and in the incredibly unique position to play both R2-D2 and C-3PO. When The Phantom Menace went into production, he not only got to build and drive R2, but he frequently put the C-3PO suit on for public appearances.

He taught me a lot about transparency in those days. When he drove R2, he’d keep the R/C behind his hip and drove blind. Not to show off his crazy driving skills (man, could he drive). No. Just the opposite: to hide them. He’d subtly cling to a back wall so that people (especially kids) would only see R2. He completed the illusion with wonder and amazement. He didn’t want the accolades. He wanted to make people happy. To help them believe the magic. To make them shine. And so, a few more points of light were born, and trailed him in the sky.

A few years later, he joined Mythbusters. Rather than shirking the “geek” label, he reveled in it, giving all of us other geeks a path to follow — unashamed of any labels that people might put on us. He helped drive the societal shift to embracing the inner geek in us all.

While most people might be happy to shine as a popular TV star, Grant didn’t grow distant. He continued to help every chance he could with anyone and everyone in the community. For several years, he mentored a high school robotics team, long after most others who had achieved fame would have pulled away. No matter how tired he was from TV shoots or how many times he had to cross the Bay Bridge in a day, he made time for those kids, even donating considerable money to ensure that they could glow in the night sky as brightly as he did. And so, even more points of light appeared in the sky behind him.

As his fame grew, so did his generosity. When old friends from ILM needed his help on small independent projects, he was there for them. Not for the money, but because he could help them. His kindness and cheerfulness were ever present. Working alongside him late at night at FonCo on various projects, he was always the one who was the most sparkling of us, no matter how late at night (or early in the morning). We all shone a bit brighter when we were around him ... and more lights followed him in the sky.

No matter what time it was, Grant the comet just glowed. His smile and optimism were contagious, and he stood out in a crowd even if you had no idea who he was. He cracked jokes, slapped you on the back, and saw the good in everyone and everything. He wasn’t good to others to keep up his image. He was kind and generous to everyone because that was the only way he knew how to be. When he helped you, you always knew everything was going to be just fine when you saw him nod and arch his brow. 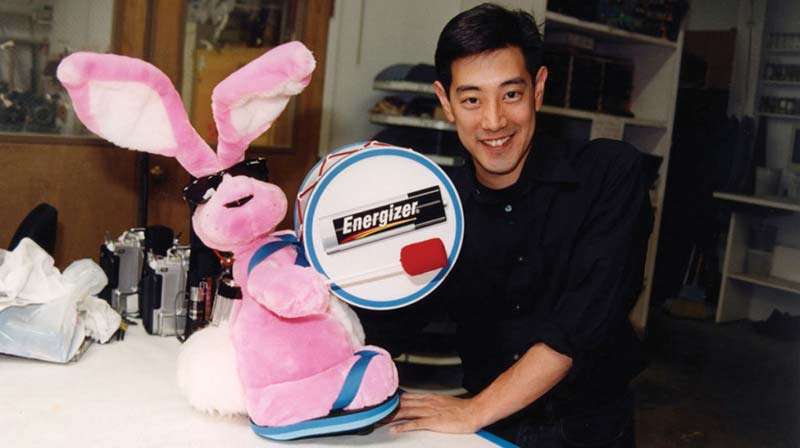 I had the great fortune of being a close enough friend to go out socially with Grant. One night at dinner, as we discussed solemn non-roboty things, a little girl approached the table. Grant never hesitated and went from being dulled by the discussion’s clouds to glowing and listening to everything she had to say. I don’t think it ever occurred to him to shoo her away ... and one more light in the sky was born.

On several occasions, when we geeks would go out “marauding” (as he called it), he was often approached by fans for photos. He never turned anyone down and didn’t just take the photo. Grant made sure to thank them for their fandom. To ask them about their lives. And to truly listen to them as they shared their hopes and dreams with him (on more than one occasion, the fans got more of him than we did).

At the height of Mythbusters, he called me out of the blue to go to dinner. It wasn’t just a casual dinner between old friends, but he looked gravely at me and said, “You know, now that I’ve made it, I want to help everyone. What can I do to help RoboGames?”

This was typical Grant. He could have bought a bunch of fancy cars and hidden away in a condo on a beach somewhere, but he never forgot where he came from. So, he MC’d a bunch of events to help everyone. (You can watch one of them at https://youtu.be/a45qx2bV6JQ. The first 1:26 of him and Kiki is great. You can see his passion and honest excitement. Grant doesn’t appear for the remainder of the clip.)

He didn’t just help host. He roamed the pits and made contestants from around the world feel special. He wasn’t basking in his fame. He was a kid in a toy shop. He just knew that he could make things better (even helping teams fix their robots). And, while helping everyone else, he always made sure that he took care of his mom (which is far more than most of us can say ...).

While a lot of stars might turn to product endorsement, Grant only ever used his name to help others (other than the McDonalds thingy ... but most people have forgotten that). He was always teaching and sharing to help people. If you saw his comet streaking across the sky, it was telling you how to make cool stuff and always focused on education.

Time is always more precious than money, and Grant was most generous with his time. Even with all the demands of work and travel, he always found time for others. When a close friend was having a Sailor Moon themed wedding, he spent months making a movie-worthy perfect giant Cutie Moon Rod which lit up for the bride.

Even his personal robotics projects weren’t to be kept in his living room. He made a replica BB-8 and a Baby Yoda not so much for himself, but for kids in hospitals who needed something to cheer them up. How many people who could do that, would? 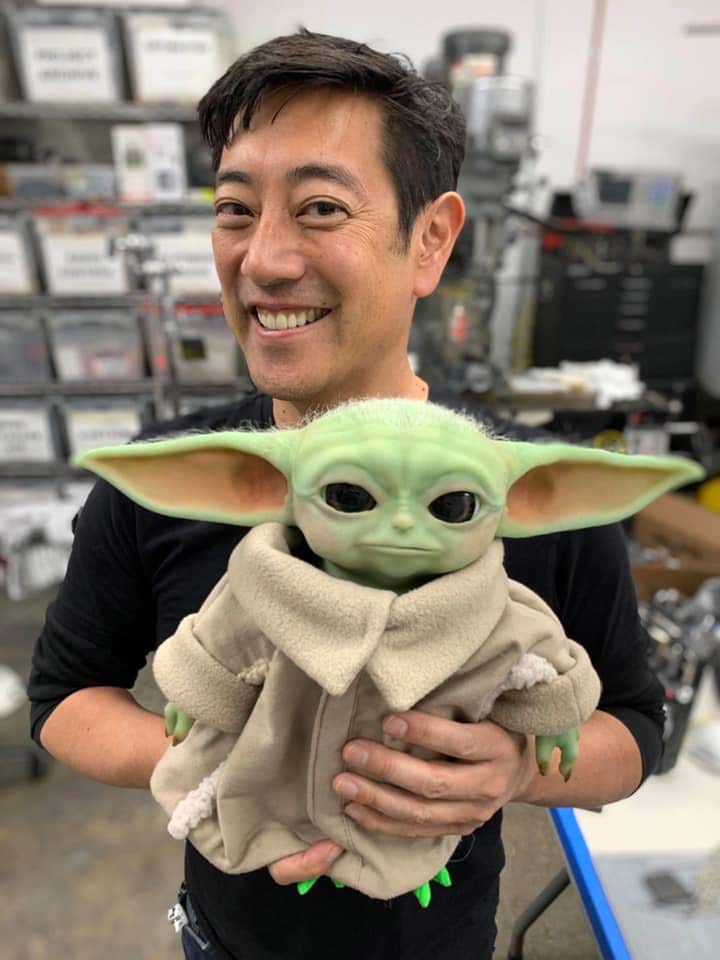 The trail he left — as all comets do — can be seen more for the countless points of light trailing it, rather than the single star at the front. There are hundreds of stories of Grant’s generosity, just like the sparkling dots of light left in a comet’s wake. He was rare and unique, fitting seamlessly into whatever group of people he encountered. But like a comet, his presence in the sky was all too short, but never to be forgotten. He stood apart in a field of endless stars, and it’s his light that will be remembered.

You’re lucky if you get to see a comet once in your lifetime. Grant was that comet.

When you look up to the sky and you see a comet streaking across it followed by an uncountable number of twinkling lights, look to see if it has that sly smile and an arched brow.