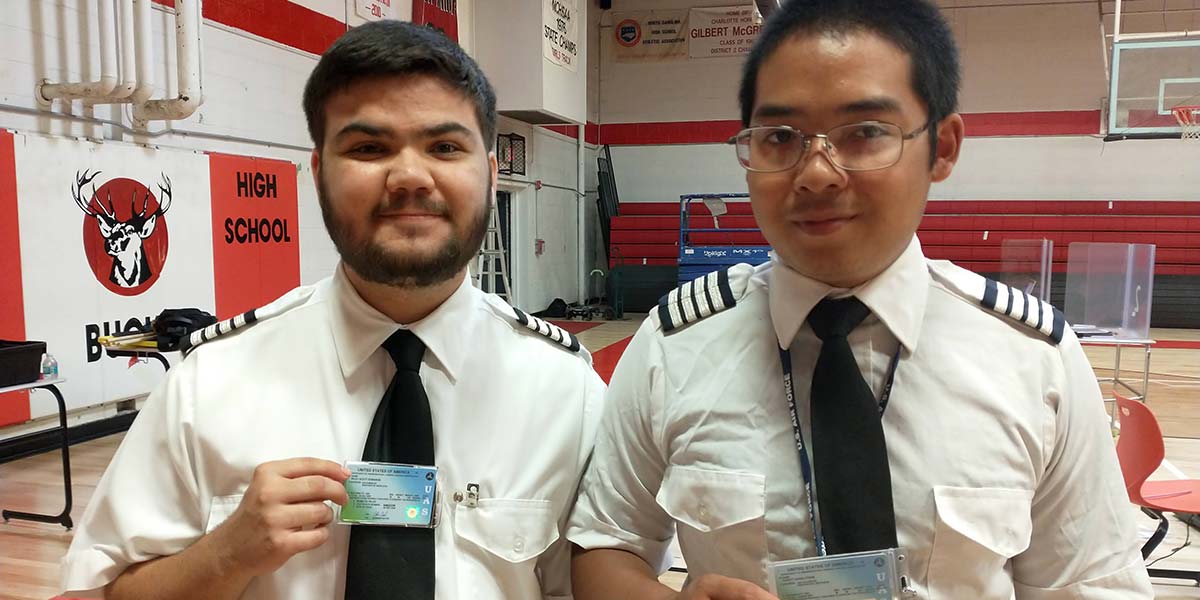 Danny Pham dreams of a career in the Armed Services. At one time, he imagined being in the Army but, during his senior year, he experienced a change of heart. Now a recent grad, he has enlisted in the Air Force and has his sights set on becoming a pararescuer: a special operations role tasked with entering dangerous environments to provide medical treatment and recovery of wounded troops. The program has a reputation as one of the most grueling in the Air Force. It requires extreme dedication and perseverance in challenging circumstances.

When Pham enrolled in “Drones I” at Hoke County High School in Raeford, NV, in 2020, he expected drones to be just “a fun little thing” — a sharp contrast to the demanding conditions of his future career. Pham couldn’t foresee the adventure that lay ahead of him over the next school year.

New Horizons in Education and Competition

As drone operation becomes increasingly relevant as a workforce skill, this knowledge area has begun to find more footing in career and technical education (CTE) courses. Teachers naturally want their students to be aware of the growing opportunities available to them in industries ranging from agriculture to construction to media to military.

And, while there are no numbers yet, state and school officials are listening as well. Drone programs at the middle school and high school level are clearly proliferating.

When North Carolina sought out schools to pilot a new high school drone program, Hoke County High School was among the chosen. CTE teacher Mario Malabunga had the background and experience to recommend his school to the state. Not only is he a seasoned teacher, he also operates drones on the side professionally, lending his services as a drone pilot to clients with diverse needs: a farmer needing to capture crop data with a multispectral camera; a realtor desiring bird’s-eye footage to promote their properties; or a contractor needing to inspect a bridge.

Malabunga’s students benefit from his ability to provide firsthand knowledge and exposure to a wide array of drone technology, ranging from entry-level classroom drones such as the Tello EDU all the way up to professional-level drones such as the Inspire 2 and DJI Matrice M200 that he personally uses for jobs such as roof inspection.

His “Drones I” class prepares students to take the FAA Part 107 exam, which certifies pilots to fly their drones under the open skies in a variety of circumstances. It also serves as the gateway to the “Drones II” class, which focuses heavily on applications.

Malabunga was pleased with the group of students he was able to recruit for the first year of the pilot program. Unfortunately, the COVID pandemic provided unexpected obstacles.

“I am proud that my kids still pushed through studying for the FAA Part 107 exam,” he said. His students took the exam at the FAA site at the local airport, and many students got their certification that day, opening the door to a potential future career path.

This dawning trend has opened the way for innovation and new alliances. CrossFlight Sky Solutions has teamed with other STEM (Science, Technology, Engineering, Mathematics) education industry leaders such as PITSCO Education to put classroom solutions into the hands of teachers and drones into the hands of students.

In addition to the courses and resources the company offers to professionals, CrossFlight offers a complete high school curriculum that can lead a group of students totally new to aviation all the way to being equipped to pass the FAA Part 107 aeronautical knowledge test.

The creativity and passion of pioneering educators today are laying the groundwork for a movement in STEM that is beginning to take flight. Hoke County High School teacher Mario Malabunga offers a prime example. 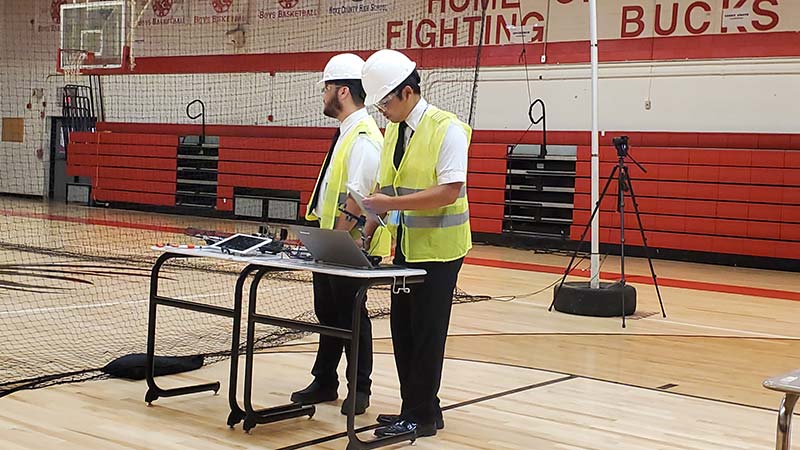 Protocols for flight safety are a major emphasis in the testing materials for the FAA Part 107 certification (which students Edwards and Pham both earned), as well as in CrossFlight’s drone curricula.

A longtime CTE teacher with professional drone experience, Malabunga (called “Mr. Mario” by his students) describes his drone program as “a guinea pig for the state,” as he (along with a few other teachers) has been working closely with the North Carolina Department of Public Instruction to define the needs and aims of drone education.

Guinea pig or not, Hoke County’s pilot program has in one sense already escaped the bounds of the state: two of Malabunga’s students — Pham and classmate Riley Edwards — teamed up and took the national title in the new SkillsUSA® sUAS Commercial (Drone) Competition.

The event — developed by CrossFlight Sky Solutions, MINDS-i Robotics, PITSCO Education, and the University of Florida’s Herbert Wertheim College of Engineering — brought student teams from across the nation into (remote) competition to test their drone knowledge and skills. Students qualified for the national-level event by first winning at state-level competitions. 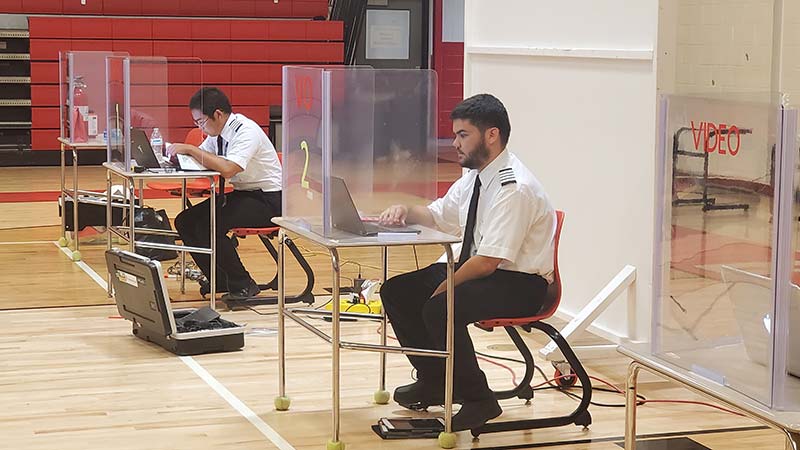 CrossFlight Sky Solutions Vice President Justin Robinson stated that his company’s aim is to formally educate students so they can one day become FAA-certified drone pilots. “CrossFlight is excited to be a part of the first truly cross-disciplinary commercial drone competition in the world and to share in this opportunity with students from across the United States. CrossFlight has a mission of safe integration of drone technology into the aviation community and feels that what better way to achieve this than to start with the future workforce.”

Edwards, also a 2021 graduate, knew Mr. Malabunga long before taking “Drones I” as a high school senior. As a middle schooler, he enrolled in a robotics class taught by the teacher. Edwards vividly remembers the enjoyment he got cutting metal TETRIX® robotics pieces to customize his design. 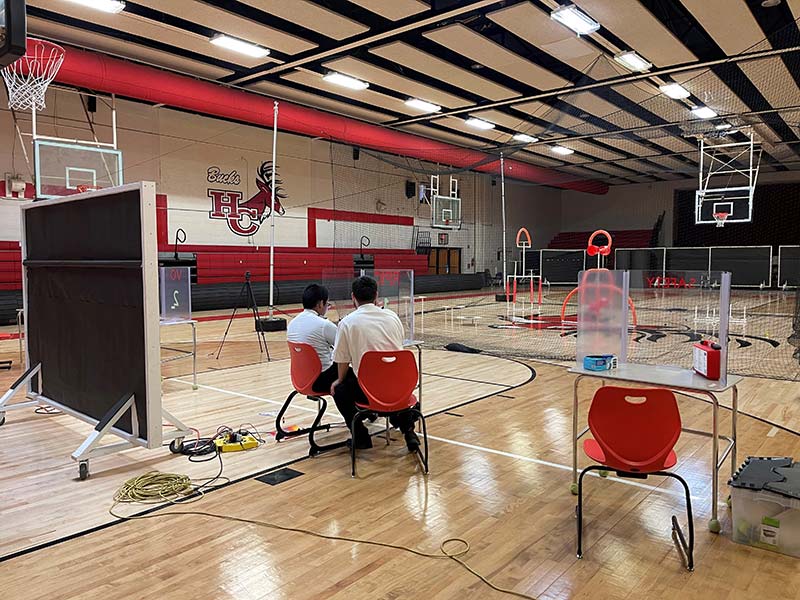 Because the national event was held remotely, a drone flight arena was set up in the gymnasium at Hoke County High School. Under supervision, the student team helped set up the foam obstacles, cameras, and the arena itself, and afterwards disassembled it quickly to accommodate the school’s wrestling team.

While Edwards hasn’t worked out all the details of his career ambitions, he loves math and anticipates a rigorous course of study beginning with a deep dive into applied physics at the University of North Carolina at Pembroke before transferring to NC State. His future plan is to become a mechanical engineer, and he admits he wants to connect this discipline with his interest in drones.

Edwards served as the visual observer during the flight portion of the SkillsUSA drone competition in winning the North Carolina state competition and then again at nationals. This meant that while Pham served as a remote pilot-in-command and operated the controls from a blind spot, Edwards visually surveyed the course and gave flight directions using appropriate FAA-sanctioned terminology. He explains, “If I need him to move left or right, I have to say ‘roll left’ or ‘roll right.’ If I need him to go forward or backward, I have to say, ‘pitch forward’ or ‘pitch backward.’”

“Our main focus was making sure that what we ask of students mirrors what is asked of drone professionals in an industry setting,” says PITSCO Education Curriculum Specialist David Meador, who was involved in planning discussions for the first-ever Commercial sUAS (Drone) Competition held at SkillsUSA nationals. “The team went through different ideas, but it always came back to that.”

The national competition had four tasks:

The event was developed by CrossFlight Sky Solutions, MINDS-i Robotics, PITSCO Education, and the University of Florida’s Herbert Wertheim College of Engineering.

Edwards was excited to win the national competition but — thanks to his inquisitive mentality — speaks with nearly equal excitement about the behind-the-scenes work.

Because nationals were held remotely, Edwards and Pham helped set up the playfield, arrange cameras, and assemble foam obstacles. They even poured cement in tires to make the anchors for the net. (Teams connected with SkillsUSA judges via Zoom. The PITSCO Education Drone Arena was set up on-site with a supervisor.) 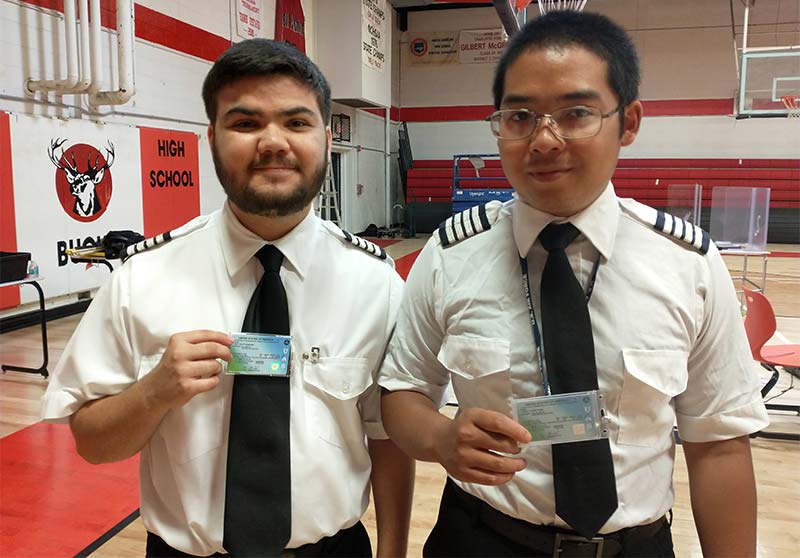 Riley Edwards (left) and Danny Pham (right) on the day they took the sUAS Commercial (Drone) Competition championship title at SkillsUSA nationals. Both students found relevancy in the competition for their chosen career paths — mechanical engineering and the Air Force, respectively.

It seems natural, then, that Edwards takes the wider view when it comes to what he has learned in the class and the competition. “It’s not exactly the components I learned that matter,” he says. “Drones showed me how advanced the technology is. I learned things like using infrared cameras on drones and how that could help with agriculture. I learned different things that drones could do. And maybe I could take them and change them up to use them in a different way.”

During competition, Pham experienced a connection with his career ambitions in a surprising way. The final component of the competition involved meticulously planning a search and rescue mission. He admits he was a little intimidated.

“There were so many things to take account of,” he explains. “There were different nearby areas — a hospital, a jail, a courthouse. It was a heavily populated area. But I took the time to see all the areas and think about what could go wrong.”

He likens this to the situational awareness and planning necessary for pararescuers: “When you go out on a mission, you have to have intelligence about where everyone is and what the situation is on the ground.”

Though the specifics of this search and rescue scenario surprised Pham, both he and Edwards were able to draw heavily from the safety protocols they learned from Mr. Malabunga.

And indeed, safety is king for the teacher: “The foundation, the number one priority, is safety because people’s lives are at risk. My students always ask me, ‘Mr. Mario, why do we have to learn all these things?’ I tell them, you guys are sharing airspace with everybody — with helicopters, with the Army, the Air Force, with commercial aircraft. We are trying to teach them to be respectful and law abiding.” 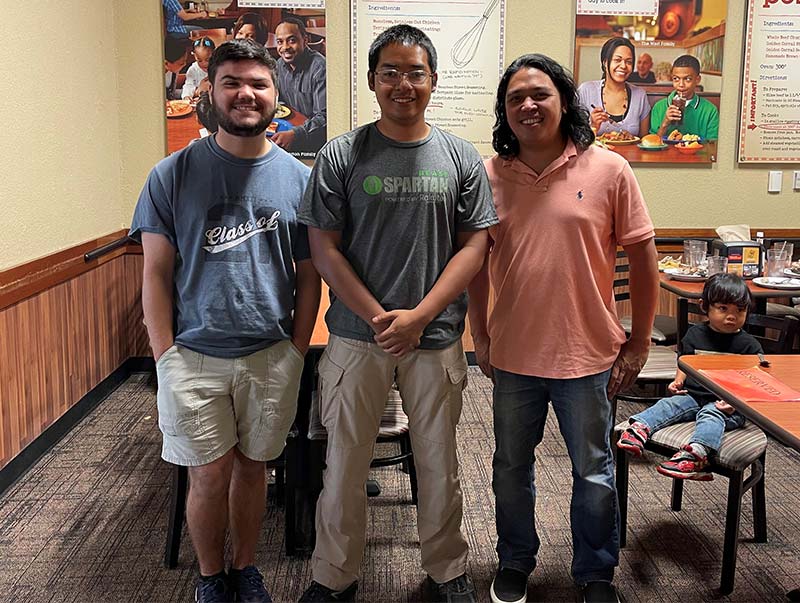 Hoke County High School CTE teacher Mario Malabunga joining with the winning pair for a post-graduation celebration and a hearty meal before Danny Pham ships off to Air Force training.

For anyone interested in starting a drone exploration program with younger students, PITSCO’s middle school curriculum is an excellent entry point.

Malabunga sees the big picture. “Teaching drones is not just teaching how to fly drones. It is respecting the people who started aviation like the Wright Brothers and the industry that tries to keep it safe for everyone. It is very important to me to stress to my students that drones can do good.” But, he explains, this depends on young people rising to the challenge. “They have to study the basics, learn the laws, learn to communicate. We have to work as a team. This is not just important in drones but in life.”  SV

The SkillsUSA organization is committed to ensuring a skilled workforce for tomorrow’s America. This partnership of students, teachers, and industry shares knowledge and resources related to trade, technical, and skilled service occupations. The annual national SkillsUSA event hosts more than 100 competitive events enabling students to showcase their skills and earn prestige and experience.

Mission Statement: SkillsUSA empowers its members to become world-class workers, leaders, and responsible American citizens. We improve the quality of our nation’s future skilled workforce through the development of SkillsUSA Framework skills that include personal, workplace, and technical skills grounded in academics. Our vision is to produce the most highly skilled workforce in the world, providing every member the opportunity for career success.